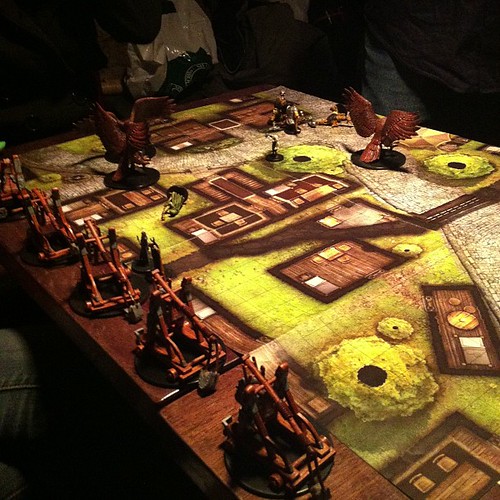 fordmadoxfraud's Stories of Our Youth AD&D campaign. When we left off, the town of Hommlet was under siege-- giant rocs & trebuchets! The rocs are creatures of Air, the trebuchets were operated by bugbears & small Earth elementals...yep, that sounds like the Temple of Elemental Evil to me! Our cast of characters was my elf thief Curulókë, Alicia's human thief Aeryn Prow, Rasheem's human bard Raz Jericho,

fatbutts's half-elf druid Glinda "Pickle" Greensprout & Ken's half-elf cleric-thief, Hazatsu (an alias, he's later revealed to be named Harlow). Like the caves under the moathouse, most of the damage dealt was...from falling. I wish I could say that I was exempt from that, but nope, Curulókë took a spill, too. While the thieves picked off the bugbears-- David said he is going to offer me the sniper kit!-- the bard & the cleric-thief ran support. The druid, though...listen, Lilly's a natural at this whole "roleplaying game" thing. She managed to speak with the rocs, & when we finished killing the bugbears & bringing the trebuchets into Hommlet to act in the city's defense, that went in a really interesting direction (the picture below was taken by Lilly, too). 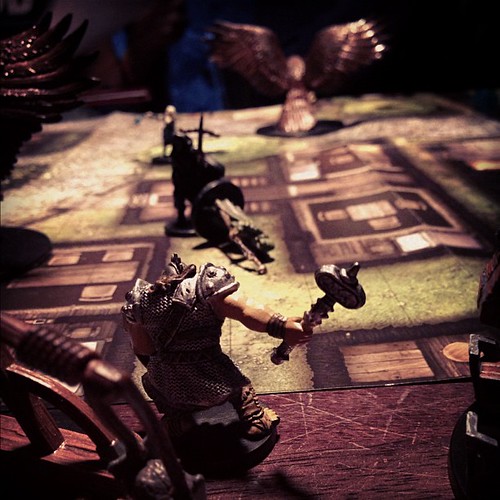 As an aside: so Curulókë is basically like, one of those spies who arms insurgents & destabilizes governments, or acts as a agent provocateur, but he's also the type that shores up small provisional governments against tyranny. To that end he's armed the children of Hommlet with goblin armor & weapons-- an armed populace is part of his political ethos-- & now provided the town with siege weapons. I like the slow war of attrition between the Temple & the town. I don't know how Nulb factors in, & out of game I know that some kind of "Grond! Grond! Grond!" gatebusting battering ram was headed to Hommlet when we left, but in game I didn't know about it so alas, there it goes. I hope Hommlet doesn't go the way of Dagger Falls, which was...well, wiped off the map, though we didn't really have the tools to prevent that, as some sinister earthquake was the primary culprit. Between rooting out the tanner-- one of the cultists of the Temple-- killing the traitor Lareth & providing some weapons to the town, I hope we've given Bernie the fighter & Jeru the druid a fighting chance. The forces of the Temple have been successful at killing Rufus the wizard, so Hommlet is compromised, but I think the scales are still tilted towards us. 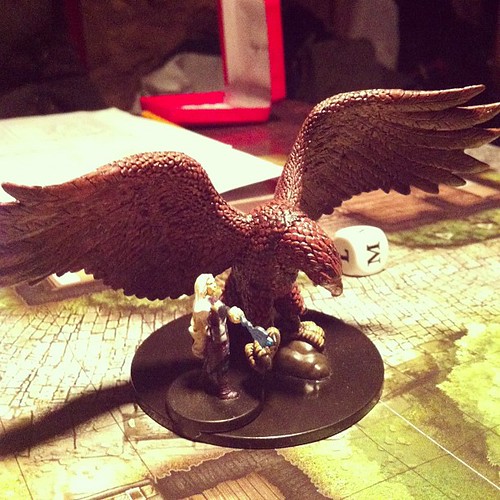 It turned out that Gilda had used her druidry to speak to the rocs in order to negotiate our assistance; the giant birds were fighting for the Temple of Elemental Evil because their eggs are being held hostage. Well, sure, we can agree to help them! After all-- free trip to the inside guts of the Temple! Along the way Curulókë takes some loose molting roc feathers-- he's a fletcher, & also has orc arrows & red feather lizard folk arrows-- as does Harlow (who has unmasked as a cleric of a god of time). Gilda is upset-- hey, I'm just taking loose feathers, not plucking pinions!-- but it also turns out via the Dungeon Master that roc feathers are explicitly magical & worth money to wizards? I didn't know that. The rocs fly us into the temple & after some trapfinding & some under the cloak cuddling with Aeryn-- hey, we gotta fit under a cloak meant for just one elf, also, sexual tension-- we get down into a throne room, & start messing with a puzzle-trap. Well, Harlow starts messing with the trap, while Curulókë eggs him on. Brown, then white, then...well, we leave the session there, Indiana Jones & the Last Crusading towards a blasphemous throne. Of note: we know Zuggtamoy is all up in this joint for sure now. 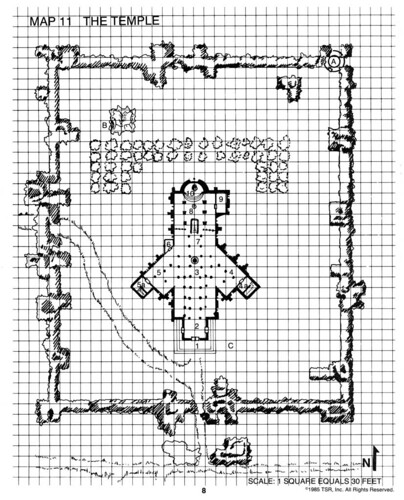 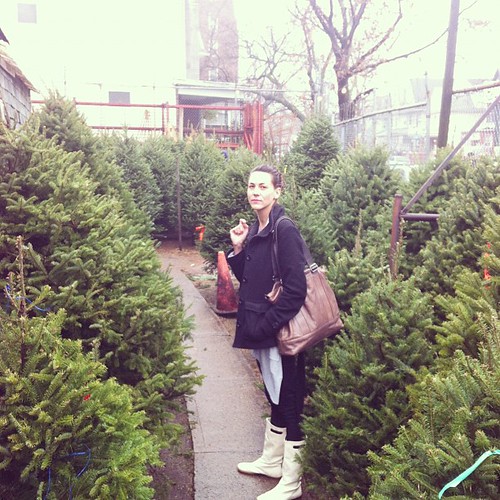 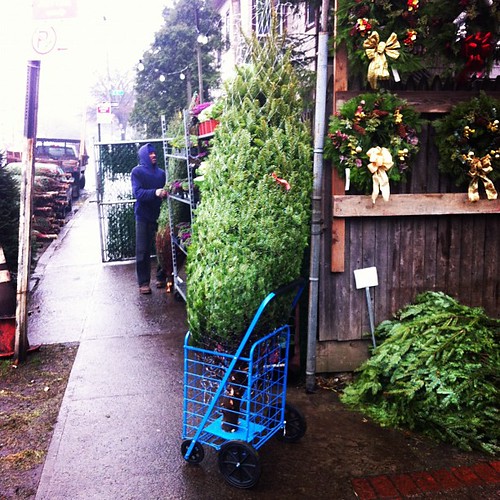 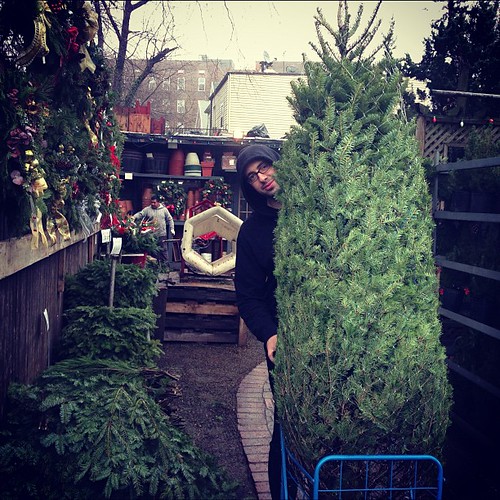 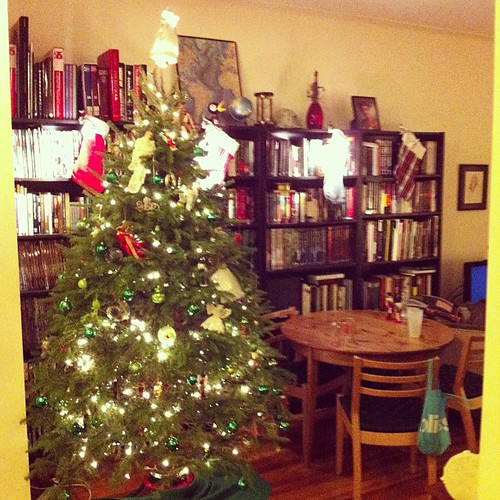 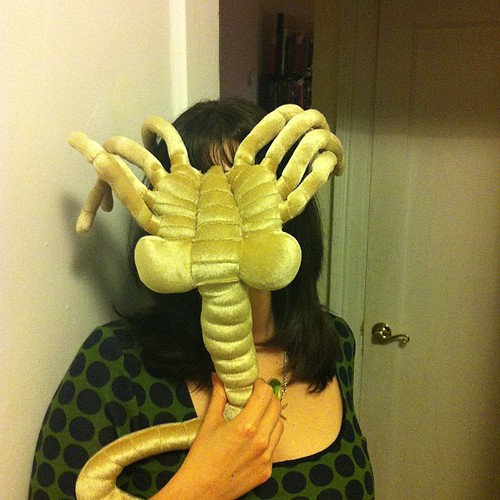 Oh alright, I don't have any idea what I've done to be alive. I just...I loose track of things as soon as I look away from them. I live in a world of ghosts & serial killers hiding under the bed. Confusing. Monday I hung out with

ravenface & we saw a lecture about Snorri. Tuesday I went to the gym & hung out on the couch with Jenny, & tried to detox; the slew of holiday drinking has begun. Wednesday was Television Night!

fordmadoxfraud came over; Jenny was a little bit cranky but we still managed to watch Storage Wars & some Ke$ha videos. Come on, if you don't think "Trek Tock" is a perfect video, you are out of your gourd. Oh, I also went out to lunch with Kat & Nicole at CraftBar. Now that Terra lives in China, I've got to diversify my lunch socializing. That China thing, by the way, is working out okay, we still get to talk at the start & end of each day, as the future & the past mingle into a time-twilight. Thursday, for instance, was lunch with Maggie, & Friday was lunch with Alexei. Friday night was also when Jocelyn & Brian came down to Brooklyn to hangout at my apartment. If you are curious what "hanging out" means, it mostly means listening to me paraphrase stories out of The Silmarillion & watching clips of Lee Pace in The Fall. Sounds great, right? Chris came over & joined us, we played a little Guitar Hero & then poof, they were gone! Like the little men Rip van Winkle played nine pin with. Thursday night was just the gym, though. Saturday we picked up a Christmas tree, then I went to go play Dungeons & Dragons, & then I went to the gym again-- take that, sloth!-- & Jenny & I watched Castle & The Soup before bed.
Collapse