When you leave this world,
a swarm of golden beetles:
Supermen, at last.

This is my pick for Eleven-Books Club; my second one after Kraken. It is no secret that I'm a Grant Morrison fan; at this point he's far surpassed the other comic book icons he shares the stage with, as far as I'm concerned. This is one of his early works-- he had already found his post-modern niche with Animal Man & Doom Patrol but you can really see The Invisibles as an early work in the arc that would lead to All-Star Superman. If that seems a little incongruent, you should just go ahead & read Supergods already. I don't think it is an accident that The Invisibles & Morrison's run on JLA are contiguous. I've read bits & pieces of The Invisibles over the years, but never from the beginning, & I thought it was high time I rectified that. The verdict? Well, it is obviously a Vertigo title, with all the baggage that entails. It is just...trying a little too hard to be bad-ass & outré. It also suffers from a "first trade paperback" feeling; you know, just trying to find its feet. That said, it is filled with Big Ideas, & you can tell that Morrison is working toward something Even Bigger. Interestingly, it is the monsters of the Bad Guys that I think he really nails; the Harmony House & the King in Chains, Orlando &...well, my favorite, The Cyphermen. A hive mind dressed up like modern day plague doctors? How could I not like that! The Good Guys, the eponymous Invisibles, are adorable, sure. Is that King Mob getting into the Marquis de Sade's car there at the end? Lord Fanny is an interesting case: Grant Morrison has dabbled in transvestitism & I think that can lead to him feeling like he's free to say problematic things about transgender people, but I think he pulls it off here, in part by focusing on the intersection of genderqueer & shamanism. To wit, how great is it when Fanny channels all those Aztec gods? Boy is underused; I don't know her deal. Jack Frost...well, you can almost forget that long interlude at the front where he is tutored by Tom o' Bedlam. Yeah, I get it, a classic hero's journey, the full monomyth, but get on with it! For me, the story doesn't start till the gang's all there. You know...I actually think the exegesis on the Marquis de Sade-- did I mention he's a major character-- is one of the strongest bits of this collection. As someone who is pretty contemptuous of de Sade, it was interesting to see his work from another light. 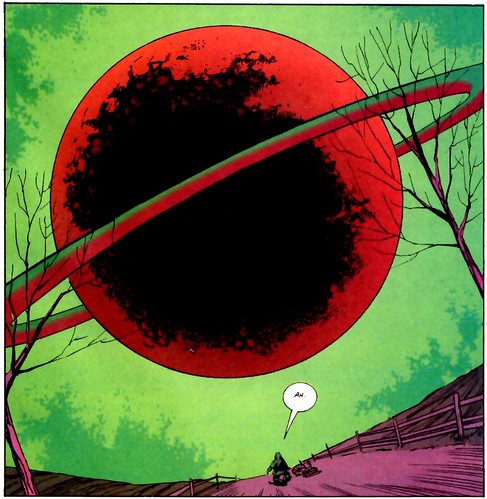