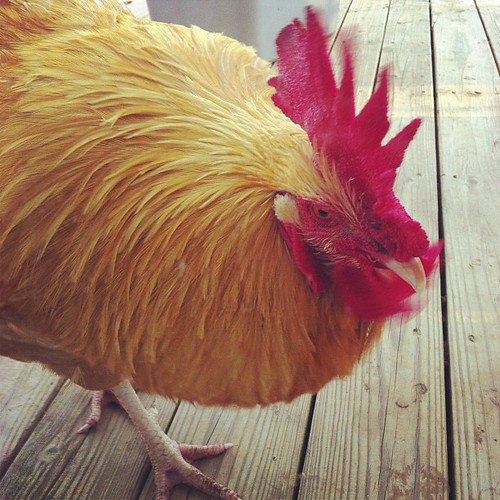 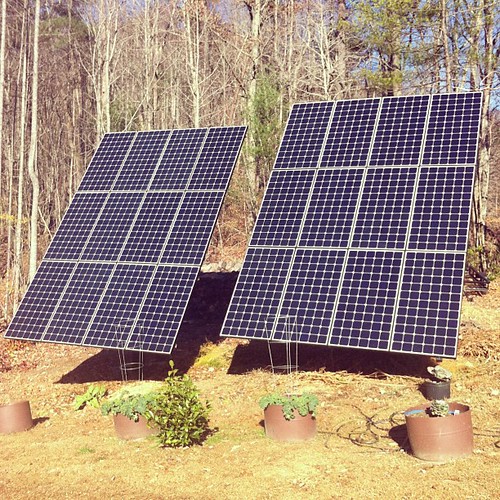 So for Thanksgiving Jenny & I flew out to visit her parents. As I mentioned yesterday, the trip down here wasn't a nightmare, which is a good thing because we cut it close. I have heard horror stories about travelling the day before Thanksgiving-- it is supposed to be even worse than Christmas, right?-- but we breezed through pretty efficiently on both ends of the flight. Her dad picked us up & drove us out to their place in the mountains. I've been here once before, but that was when they were really just finished settling in; they've made a bunch of self-sufficient alterations since then. Their garden was their pride before, but now they've added solar panels & put in a chicken coop! The solar is impressive; they say it does a third of their yearly use & that if they weren't connected to the grid they'd still have power for essentials...including hot water. Not a bad end of the world scenario! The chickens are interesting; they've got ten & a rooster. There was talk for a while about raising rabbits, which I was leery of, personally. I mean, I've been a hunter & spent time on a farm growing up; I've killed my share of birds & mammals, but those were all strangers. I would have a hard time killing a mammal that was mine. I haven't developed the part of my brain that separates livestock from pets. If I owned a goat or something, I could milk it, but slaughtering it would be rough. Birds on the other hand? Those stupid little dinosaurs are just robots. That would be much easier. Anyhow, they are out there picking over the turkey bones from last night. It ain't quite cannibalism, but it is close!

So yesterday Jenny's dad showed me around the solar system & the chicken coop & then we all came inside & sort of did our own thing. I finished reading a book & wrote a review for Tor.com. Oh! & Aaron introduced me to Starbase Orion, which is an iPhone game that is basically a retroclone of Master of Orion II. I beat that, too. On my new phone; Jenny gave me her old one & stole my upgrade. Let's see; then dinner was nice. We didn't really help, except for with the clean-up; it was the Turkey Day usual spread. The bird came out very moist & the gravy had a lot of sage & that was a nice combination, you better believe it. I didn't gorge myself; I had a sizable plate but no seconds & no pie. Man, I still have to work on my hurricane weight! After dinner we busted out Small World & played it with her parents. It was a really weird game: both the homunculi & cursed were in the first three power & race deals, & those are both weird & disruptive. In the end, Jenny's ransacking sorcerers battled against my fortified wizards, while her mother's seafaring homunculi came in from the ocean & her father's hordes of goblins drove in from the south. The cursed tritons came in on the opposite end of the board, controlled by her mom as soon as the homunculi went into decline. I kept with the fortified wizards for a while, since they were making bank, but they were really weak once they went into decline. The game came down to Jenny's pillaging humans, my flying pygmies, her mom's diplomatic amazons & her dad's catapult leprechauns. Her dad won; from my perspective that catapult demolished my entrenched races, & the leprechaun power let him reap lots of gold, unopposed. A fun game, washed down with some moonshine. Then I watched a bunch of youtube videos of "JTO & Bobby Duck," a ventriloquist comedian that Jenny thought was the bee's knees when she was a kid.
Collapse