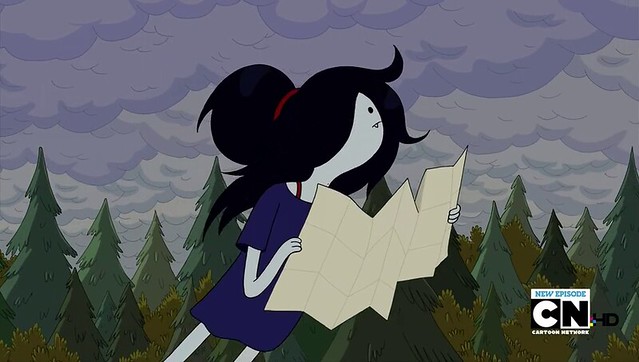 Last Monday I took off work, because...well, because I have vacation days I have to spend sometime. Terra came over early for hangouts. I threw some pillows on her & then she fell asleep! It happened! Believe it, son! Just for a second, though; next thing you know, she hopped to her feet & we were off to the gym! I like having a partner at the gym; it distracts me. The key for me at the gym is not getting bored; that is the biggest enemy for me when it comes to working out. Boredom is what undercuts my willpower the most. That isn't counting getting to the gym; I would say actually getting out of the apartment is the toughest hurdle, over-all. Keeping a "three days a week" routine has been instrumental in defeating it; discipline & routine form smart habits. We did an hour & a half & then came home to watch Krull & eat Indian food. I've talked about Krull before; it blows my mind that it was almost the Dungeons & Dragons movie; even if that rumor isn't true, it still feels like it could be an amazing Sword & Spaceship story for D&D. The bad guys are like, H.R. Giger people! My favorite. This view through, I just though of all the older characters are the faded remnants of their former glory; as the dwindled memories of Lord of the Rings in particular. Ynir as a Gandalf, stripped of glory, the Emerald Seer as Saruman, obsessed with his palantír, the Widow of the Web as Galadriel gone Drow. I heart that movie; Krull was the first film I saw in the theater. After that, we watched Mythbusters & some My Little Pony: Friendship is Magic, but frankly, we were just waiting for Adventure Time! It was a sequel to "Five Short Graybles" called (shockingly enough) "Five More Short Graybles." Guess which one was my favorite! You're right, it was the one with Marceline! "The one with Marceline" is pretty much always going to be my favorite. Seeing Beemo & "Football" again was great too. I confess, I didn't get the theme of five tastes; I was suckered in by the "five fingers" theory, but as Cuber says, no one has had five fingers in forever! 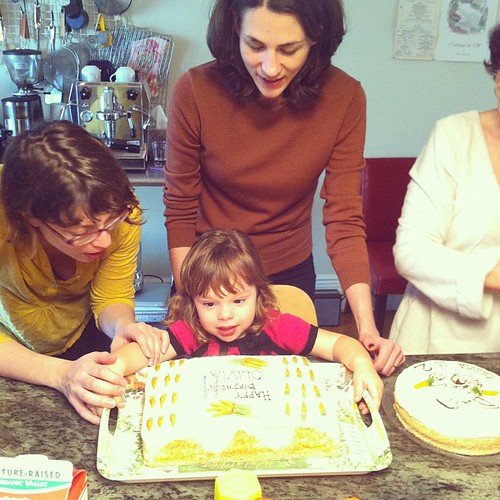 Before I start talking about being in North Carolina-- hey, I'm in the woods with chickens!-- I should finish a post catching up on last week. Mostly as an excuse to use that picture of Olivia, because how cute is Olivia? Okay, well; Saturday we went to Westchester, so that is fairly well documented. I did forget to say that the Just Dance game that we played at Terra's had the song "Let's Go To the Mall!" by Robin Sparkles, id est, one of the songs from How I Met Your Mother back when that show was still good.

fordmadoxfraud & I danced to it; it involved spanking ourselves a lot. Sunday started off with Olivia's birthday, which I haven't talked about. Jenny & I met up with Nino & drove to Bay Ridge for the occasion; Jenny bought a eerily lifelike stuffed dog toy for Olivia as a present. It is...creepy. Did you know non-humanoid figures can fall into the Uncanny Valley? Well, they can! The party was fun; the usual suspects came & I got to bond with Joe's girlfriend, who I hadn't ever really gotten a chance to talk to before, despite being in the same room on several occasions. Oh & Olivia was going through a box of stuff that Kira & Nino had gotten delivered, & was saying "present for Olivia!" for everything they pulled out...except when they pulled out a pair of black pants, which she said was a "present for Mordicai!" Cute, like I said. After that, we came home & had a book club meeting! We'd rescheduled it so people could go to Terra's place on Saturday. Next book is my pick, The Invisibles volume one. Monday was a big Terra hangout day; we'll have to plan one when I get back, which'll be our last chance for hangouts before she moves to China. Oh, hold on, gotta watch this commercial for The Hobbit. It is hard to believe that it comes out next month; heck yes. Alright, Tuesday? Ah, I don't know, whatever! I wrote an article for Tor.com, we had a cleaning person come, & I went to the gym. I don't know what else; nothing else? I was lazy, I guess. Jenny & I watched sitcoms when she came home. Then Wednesday was a travel day; I packed, we left, did the whole airport thing. I'm not good at airport security; it is always Keystone Kops with me, taking my shoes off, forgetting my belt, whatever. We were running late so I didn't protest when I had to go through the pornoscanner. I'm not sure if contentious objection is a thing I care about for them? I agree that they are a boondoggle, a piece of security theater, & unreasonable search. They aren't effective, are used unprofessionally, all that, yes, I'm on board. I just feel like a top down solution is really the only one that will get rid of them. Maybe that is defeatist. I could just be too lazy to put my convictions ahead of minor discomfort. Not flattering but probably all too accurate.
Collapse