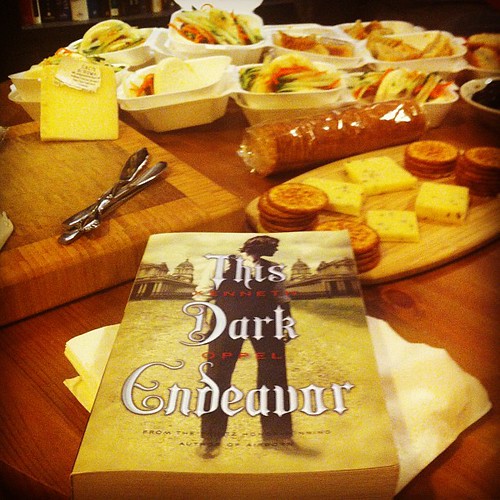 Alright, let's talk about Eleven-Books Club first! It was Jenny's pick this month, & she selected This Dark Endeavor, which is about the alchemical adventures of a teenage Victor Frankenstein. Let's get role call out of the way first: Terra showed up first on account of how the train schedules work, which gave us room to gab about her party, then Carmen showed up. I assume that Carmen being pregnant is going to lead to her missing at least one of these things-- you know, when she has a baby-- but not this one! Then

littlewashu was next; she had texted me the time that her GPS estimated she'd arrived & it turned out to be really accurate. Plus, fresh ink! Then

ranai, fresh from the dating scene, followed by

fordmadoxfraud who brought with him strange cheeses, dumplings & baos. Beatrice rounded things out, arriving last but just in the nick of time to get in on the whole discussion. That is eight, right? Not bad attendance. Somehow, the first thing we started talking about was Rick Mommy, invented during an accidental inversion of the phonemes of "Mitt Romney." Rick Mommy is the panethnic parent of a single child, whose gay partner runs a vegan bakery shop small enough that everyone needs public health care coverage, even him & his partner Rick. Still, they say what they mean, they mean what they say, & they are the sort of people that you'd really like if you met them at a party.

We had some differences of opinion in regards to The Dark Endeavor. Predominantly that some of us-- I think most notably David & myself-- really liked the "hunt for the MacGuffin" adventure story, & some of us-- most vocally Carmen & Kerry-- thought that it was too convenient & cliche. I emphasize that they were differences of opinion, too, because I don't disagree with their statements, just in the final judgement of them. For instance, yes, it is ridiculous that they would need a coelacanth head & there just so happens to be some living in Lake Geneva. Ridiculously awesome! See, that there is the disconnect between the two viewpoints, I think. I agree that the quests followed a formula, & that they were pretty implausibly available, locally. That just didn't bother me, because it followed the Rule of Awesome; that is, it doesn't matter how absurd or implausible it is, as long as it is awesome enough. My current Oubliette campaign follows the Rule of Awesome, also known as "because fuck it, that's why." Got a crazy idea, like "what about Frankenstein spelunking the secret caverns below Lake Geneva to search for a coelacanth?" Well, heck, throw it in there! From reading up on coelacanths, it sure seems to me like Kenneth Oppel did he research; other than the fact that the extant coelacanths live in the benthic depths of salt water oceans, their ecology is pretty much as he described in the book. The other point of interest was the violence & the sex. Not condemnatory of either; but just a discussion of that portrayal. Toward the end of the book, Victor gets an erection fairly explicitly, while the rest of the book has been very abstract in its portrayal of physical attraction. That was a point under discussion, along with Elizabeth's feelings for Konrad & Victor (loving the goodie two-shoes but attracted to the bad boy) & the wolf-scent in the first quest. The violence, well-- no one can quite decide whether the most surprising was Elizabeth biting the vulture, Victor losing his fingers, or the death of Krake.

After the book club closed up shop & everyone went home, I came in to check my email & saw the best email ever. Vindication of the geekiest joke! It was an email from a Gene Wolfe fan who saw my Book of the Old Sun spoof review. A little context: a few years ago I tried to organize a Book of the New Sun re-read with whomever wanted to join in. It was sort of successful, too! Speaking of, I think I am going to do a massive re-read of Gene Wolfe for Tor.com at some point soon. Anyhow, during the re-read of The New Sun, Rabbit Hole Day came up! You know, the day where bloggers are supposed to write fictional posts about a Mirror Mirror universe? Well, to participate I cooked up that fake review, peppering in details like "by John V. Marsch" & connecting the inhumi of The Book of the Short Sun to the Annese of The Fifth Head of Cerebus. A cute gag, but one that I thought would only amuse me & James. I got an email from a fan who saw it & was like "where can I get this book, I need to read it!" followed immediately by a "oh you totally got me, I was taken in by that fake review, that was exceptionally clever." For real, "exceptionally clever," that was his term for it! So yeah, that is a sweet treat; writing a review of a fake sci-fi book for a made-up internet holiday is a pretty nerdy thing to do; knowing that there are people out there who found it funny is a nice affirmation. The internet is great.
Collapse