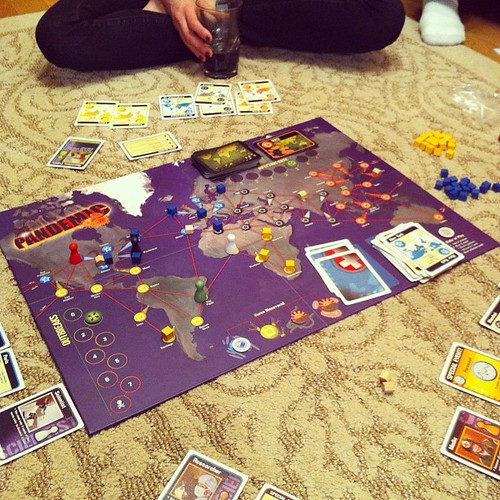 My diary has turned into a list of "begats." Well, on Tuesday I woke up & went to go vote with Jenny. No problems there, besides some minor confusion over the redistricting. I've got some new representatives. I like voting, a republic is okay. After work I went to The Library with Terra, Jocelyn & Brian, Matt & Kat. We stayed there for a bit-- correctly identifying that the film we were watching was Suspiria-- & then headed over to Kat's. Picked up Jenny on the way to buy Georgian wine & then watched the election. Or well, not really-- we watched pundits but the interesting stuff didn't happen till we were at home. Wednesday was Television Night with

ranai & James. It was super snowy! & everyone was crazy! What did we even end up watching? Oh yeah, Total Blackout. Goofy reality is alright. Then Thursday was Terra's rescheduled going away party for work, & that was with...too many people to bother naming. Everybody from her company was there, & a bunch of people from related departments. That went late, which made Friday a total dud. Good thing, too, because yesterday was fairly busy. Had our apartment cleaned, got breakfast, did laundry, played AD&D with David, Alicia & Emma, helped babysit Olivia for a minute, went to the gym & then went to a party downtown. Jenny's co-workers, which meant we played Pandemic! My first time, & we had it on easy but we still lost! We were close, but we took too long & ran out of cards. We cured three out of four & had enough in the Scientist's hand to cure the fourth on her turn but we were three cards short. Then it was Cards Against Humanity. A...surprisingly focused game? Not knowing anyone there besides Jenny, I took a bath, didn't win a single card. I did hijack the conversation to talk about Homestuck for a while though! Then today. I've...well, I made breakfast but that is it. I'm going to organize my thoughts & then go to the gym.
Collapse