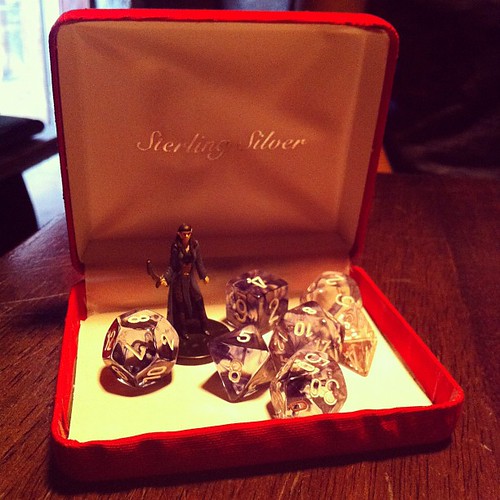 fordmadoxfraud's "Stories of Our Youth" AD&D campaign was another fairly small & intimate session. As with last session it was just me as the elf thief Curulókë of the Smiling Parliament, with Emma's halfling psion Dilly Terduckener, but this time we had Alicia's human thief, Aeryn Prow added to the team! A few sessions ago Aeryn went down a spider hold, & since Alicia hasn't made it to the last couple of sessions, she just came out now! She was all beat up from her adventures, & Curulókë was all beat up from his (mis)adventures, so it looks like we've all had a rough time of it. We met in Hommlet, the town outside the Temple of Elemental Evil, & since the retired hero-wizard Rufus has been murdered-- by the tanner, Ramos Davil, & the anti-mage assassin Gramag-- we decided to chip in with Bernie, the retired hero-fighter. We exchanged information with him, & then bunked down in the town jail for the night, on his insistance. In the clink? The cleric from Dagger Falls, Liam Goldmist, now going by the name Arduino. We talked with him-- Curulókë is still suspicious, especially in the wake of Lareth turning out to be evil, but Curulókë also wants to hope for the best-- & he healed us up. During the night, Dilly gambled with the guards-- who didn't lock us in or anything-- & laid one out with a haymaker, while Curulókë & Aeryn cuddled. Thief romance! After that? We went to the spider hole in the moat house that Aeryn had explored. There...well, Curulókë made an ass of himself falling down. Seriously, I have a decent climb skill, why so much falling! & I didn't roll low for damage, either, I was all messed up. In the spider cave-- where Aeryn said she met a drow-- we found a cauldron of blood used to dye robes, a pit full of bodies, & a demonic font of water that seemed super pure? That last one is a mystery! Dilly climbed into the pit of bodies & on a critical failure found a red ruby; presumably that'll be cursed or evil, right? Aeryn & Curulókë spent their time putting traps everywhere. Curulókë was so messed up from tumbling down cliffs that he wanted to go back to Hommlet to rest & heal, so we ended it there. 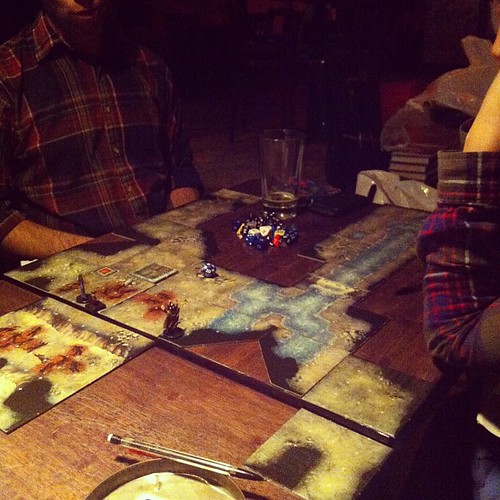