Punching Out, by Paul Clemens.

Won't pay child support.
This: the blue collar hero.
I sort of hate him.

Last night was the Eleven-Books Club meeting for Jenny E.'s pick, Punching Out. Up front, I should admit that I didn't finish this book; I got three quarters of the way through & lost my will to continue. I didn't hate it but I didn't like it. & in fact, maybe did actually hate it, when I stop to think about it, or argue with people about it. Since I'm sort of smashing my reaction post in with my event post-- how I felt about the book plus how I spent my evening-- let me take a moment to run down the role call. Me & Jenny, obviously, with

fordmadoxfraud next, then Terra, then a long pause before Jenny E.,

littlewashu & Beatrice showed up, one after the other. I got to tell Kerry how happy I am for her that Princess Bubblegum in Adventure Time is continuing the tradition of red headed lady scientists. Alright, so to the book; I think Jenny was the only one who liked it! We all had different reasons for disliking it, though, but I would say there is a lot of overlap in the Venn diagram of those reasons. One of the things that really bugged me was the author's "aw shucks, salt of the Earth" relation of racist & sexist jokes. I kept a running tab of them-- he keeps related these second hand racist & sexist comments, for some reason-- until I ran out of room. He presents them, I thought, with a sort of "gee willickers, I guess us PC types are too sensitive for this stuff" vibe, though in context he's just relating what other people have said. Not everyone agrees with me, but I still say-- part of being a non-fiction writer is selecting your content. He doesn't relate every word these people say, which means he choses what words to keep from their conversation, which means that yeah, I think he is editorializing. He has to, that is the nature of the beast. So yeah, there was a "good old boys" attitude that Clemens related which I found alienating. I hate some of these guys. They remind me of the jerks on Bering Sea Gold. I guess his other book is about race relations, but for all that, I thought this book was rather silent on the realities of a virtually all white crew working in a virtually all black neighborhood. I get that he was making a book more about class...but the overlap of class & race in America means it seems sort of hollow.

Which was, I think, Jenny's biggest problem, even though she liked it: the lack of a real examination of class & privilege. David's concern was one we all picked up, which is the lack of...well, journalism. The book is...well, descriptive, & that is about it. There isn't any digging, even to the point of him making a point of how he was too shy to go over to talk to the guys he wanted to interview. Sorry, you've got to go talk to people if you want to write investigative journalism. Me, I want to hear more about the copper thieves, can you seek those guys out? Sounds hard, sure, but Terra knows someone by one degree of separation who is a copper thief, so if we were writing this book, we could have found them, you know? It sure isn't impossible. Jenny E. defended him, saying he had a day job, which...well, then maybe that is just a reason it isn't a very good book? It sure doesn't work as an excuse. It isn't that we doubt his journalistic integrity. One thing that bugged some people about The Big Year was that narrative non-fiction sometimes have fictionalized elements; Punching Out doesn't do that. It doesn't create plausible dialogue for things Clemens wasn't present for, or combine two people into one "character." Though one of the major problems people had was that there weren't characters. None of us cared about anyone in the book. They were acquaintances, at best, you know? The biggest "character" in the book is Clemens, & when he inserts himself it is awkward. Why do you keep talking about being Catholic, man, it is not germane! Actually, the person with the best takedown of this book is...Paul Clemens? During his interview on The Daily Show, Clemens lays out the book's problems pretty openly; in a nutshell, he lacks a thesis. Any thesis. Which really is the flaw at the heart of it.

My favorite part of the book was him talking about the cold. Those descriptions had a lot of truth to them. I guess that might be partly why I disliked this book so much, in a weird way. The whole "blue collar Detroit" is not that foreign to me, growing up in blue collar Cleveland. The Wasteland is just what happens fifty years after your economy collapses; Detroit is part of the same system, the same ring of steel surrounding the Great Lakes, the industrial runoff from old New York. Detroit is the last to fall, & Pittsburgh is the most graceful to fall. Cleveland just evaporated away, let the green run in, let the forest reclaim the abandoned factories & warehouses. That was the landscape of my childhood. I've spent time in them as they closed. I know these guys, & I know that there are "we are just making jokes" racists & that there are guys who aren't racists; they aren't all the former & the former aren't scoundrels with a heart of gold. I had a childhood where the rumors of layoff were a reality. I still have friends who are stuck in The Wasteland because of underemployment & the curse of cheap housing. I get all that, & in a bare bones fashion, Clemens lays it out. The thing is "industrial jobs in America are disappearing" isn't a news story. It is just a fact. They aren't even disappearing for magical reasons, or in ways we want to fix: you can't compete with unsafe working conditions for semi-slave labor that pollute everywhere. Which, to get political for a moment, seems to be Romney's Five Point Plan. It doesn't take much reading between the lines; Romney's plan for America is an actual plan, at least on paper. That plan is: exploit America's energy resources. The thing about that is...no, I don't want that. I don't want to return to a day of coal barons. I don't want to destroy America for money. He wants deregulation in safety & environmental protocols, he wants the ability to under pay & bust unions. It is a plan: fight against sweat shops & coerced labor by...starting American sweat shops & coerced labor. He says it all pretty plainly. & well...no. That is what I say. Nope, that sounds terrible. 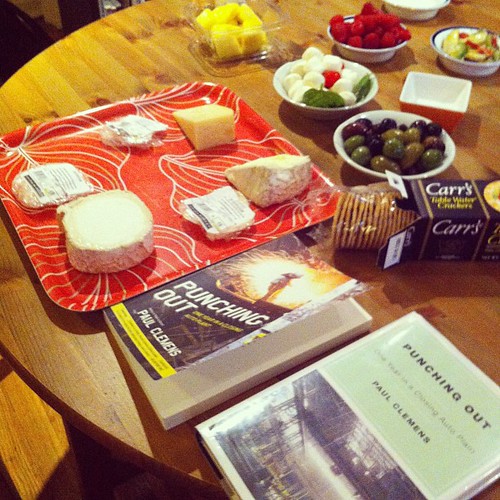