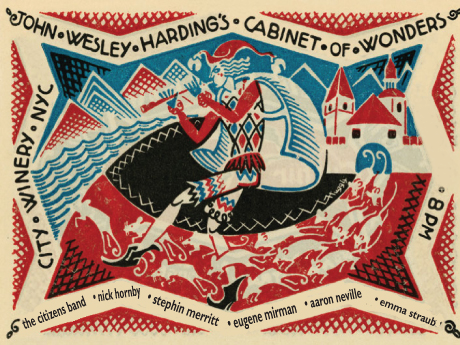 Last night Jenny & I went to go see John Wesley Harding's Cabinet of Wonders featuring The Citizen's Band (Angela McCluskey, Nina Persson & Rachelle Garniez), Nick Hornby, Stephin Merritt, Eugene Mirman, Aaron Neville, & Emma Straub. Sounds like a mouthful; well, it was! It was at City Winery-- it always is, near as I can tell-- & I headed down there after work. Well, to be quite honest, after a stressful day at work-- haunted by the mistakes of a less experienced Mordicai early in the fiscal year-- Terra & I walked down to Kat's apartment, hung out for a bit, then I walked down to Chinatown to pick up Jenny. Dinner was good: duck rillette, scallops & brussels sprouts to start with, then braised short ribs for Jenny & lobster & saffron pappardelle for me. We started with the on-tap Sauvignon Blanc, then moved to a Grenache...but there was a bit of a misunderstanding with that that made me look like a jerk! Well, not too bad. Jenny ordered it before the lights went down on the performance & since the staff was busy it took a while for them to bring it to us-- after the show had started, in fact. The waiter brought a white wine over, poured, I tasted it & said it was fine, he poured a full glass for Jenny...& Jenny notice, you know, it wasn't what she ordered, since she, well, ordered red. I didn't know, & I had just facilitated the whole thing to try to make it quick, since the show was on & I didn't want to be rude. It worked out in the end, so I can't complain. We were sitting next to Sarah Vowell, who I don't have a relationship to as a reader, but then Nick Hornby came out & sat next to her & Jenny found that very distracting, in a good way. Since a big part of Nick Hornby's shtick as a writer is being really invested in enjoying things, it was nice to watch him immerse himself in the performance, what was her thing. They shared a laugh at one of Eugene Mirman's jokes.

The set was fun. I hadn't met John Wesley Harding when we were publishing Charles Jessold, Considered as a Murderer, so I wasn't entirely sure what to expect. As the emcee, he wrote a lot of poems & provided interstitial music, some of which I'd heard before. On NPR; I mean, look at that list, of course the whole thing was being recorded by NPR, that is like their bread & butter crew. The Citizen's Band really charmed Jenny; they had an election themed set of songs, which I enjoyed but just ticked her pink. Emma Straub read from her new novel; she reminded me very much of a genuine version of what some people have pretentions of being. I thought she had a sort of charisma, the sort that comes from being a good version of yourself. I guess I sort of aspire to that, myself, come to think of it. Eugene Mirman was very funny; he had a set about a bachelor party that I found to be somewhat accurate to my prior experiences at strip clubs. Oh, & talked about "coze," the Norwegian verb of "cozy." John Wesley Harding was missing when he finished his set, so he workshopped a bit about marrying two people with two women from the audience. Stephin Merritt was next & wait, doesn't everyone have an intense connection to 69 Love Songs? People in the audience were reacting like they were hearing some of the songs from it for the first time, which is crazy. Listen, if you don't already adore 69 Love Songs, I assume it is because you haven't heard 69 Love Songs, so stop what you are doing & go listen to all three albums right now. You're welcome. Nick Hornby read next; the first piece was about football-- soccer-- & he admitted to sort of trolling the American audience by reading it. I get it, though, I think; I assume that people feel about sport teams the way I feel about Community or something, right? Finally, Aaron Neville closed out the night. I don't know who he is as an R&B singer, but as a Doo-wop singer, he killed it. His voice did all those crazy things it is suppose to do. Oh & he's in his seventies & rocking like a boss. Kira's stepdad Robert is the same way. I guess I aspire to be an invincible septuagenarian too, when it is my turn to spin the wheel. 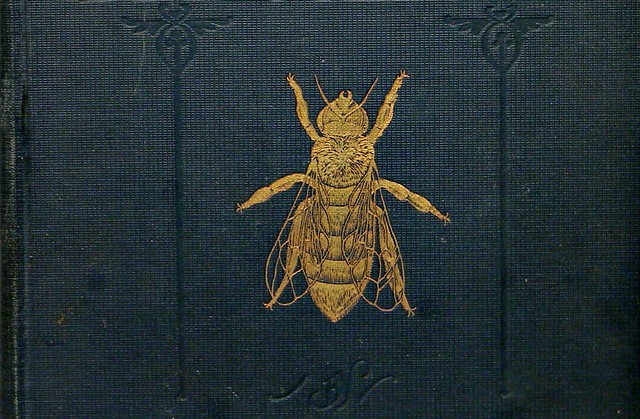 I just want to continue the habit of sticking my fingers in-between the pages of my life, keeping sort of a tab on what sort of antics I've been up to in my life of late. I do the same thing when I read, actually; my bookmark is a piece of blank paper folded into quarters that I use to scribble notes & page numbers on. A handy index tailor made by me, for me. I mentioned Monday was watching Adventure Time, which was...actually incredibly fulfilling. Then I hung out on Tuesday with Terra. She's moving to China in two weeks for two years or so, so we've been trying to cram in friend times where we can. Then Wednesday was more Adventure Time! It was Television Night, & for the longest time it was just me &

fordmadoxfraud did show up. Last week's TV Night he was an hour early, this one an hour late, it all comes out in the wash. I broke them, I think! Which is to say, they both left the the pleasurable melancholy that Adventure Time can bring. Jenny came, too, in at the end, & we watched some sitcoms. Like, Animal Hospital? Which I don't mind watching, but you know, isn't any good. & Modern Family, which still is good. I'm enjoying the inevitable comparisons between it & The New Normal. I'm still making up my mind about the latter, but I do like that the gay couple are more physically affectionate, & that they face more plausible struggles against bigotry. Ball's in your court, Modern Family, & also other television shows that should just have gay people on them, no big deal. Thursday night Jenny worked late & I just went to the gym. I wasn't a superhero at the gym, but I needed to go & so I did. That counts for something. Then like I said, Friday was the Cabinet of Wonders, which was a very nice date; Jenny fell asleep as soon as we got home, though. Well, we watched Parks & Recreation, then she immediately fell asleep. I may have tried to get her to watch "Sons of Mars" while she was still groggy. Today I want to go to the gym again & then we have Eleven-Books Club tonight.

Remember how, back in the old World of Darkness, they had scads & scads, oodles & oodles, of various blood magic sourcebooks? Thaumaturgy was either a carefully held secret of Clan Tremere...or you know, a diverse body of knowledge practiced by Tremere, Serpents of Light, Tzimisce, Assamites, dilettantes, sort of the Giovanni, etc. It was sort of a mess, frankly. The new Vampire: the Requiem made blood magic a social issue, not a bloodline one, which helped window it more intelligently. You could get your blood magic from joining the Lancea Sanctum, the Circle of the Crone, or maybe some weird dead coven. It just highlights the philosophical changes between Vampire: the Masquerade & Requiem , or heck, between the old World of Darkness & the new. Making things less straightjacketed & more open ended means that there is more room to play around without having everyone be a crazy exception to the rule. Anyhow, I picked this book up for the same reason I picked up Witch Finders: it has an alternate system of magic. Since I use the World of Darkness rules to run my Oubliette campaign, that has value to me, at least in theory. I made house rules for making Rituals into Merits, which was...well, ad hoc & not really what I wanted. I feel similarly about the rules here, actually; they are sort of Mage light, but they aren't streamlined down as much as I'd like. Sort of my problem with Mage: the Awakening in a nutshell; if you make a flexible magic system but find your book filled with specific spells, then your flexible magic system has failed. Here, it isn't that exactly but rather-- if you make a flexible magic system & find your book filled with lists of mechanics...well, then it isn't exactly working. I'm sure it works fine in playtesting-- it doesn't seem broken or too difficult to learn-- but it isn't as elegant as I want. I want to make the Storyteller mechanics even more streamlined, personally, so that is what I'm looking for. Sleek, sexy mechanics. I think between the end of my current campaign & the next I might make some big overhauls to the system.
Collapse