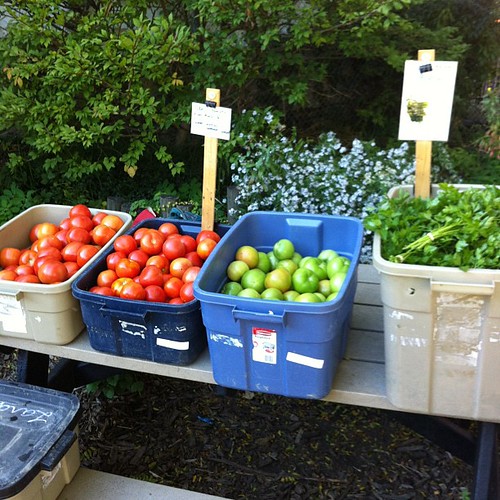 Despite the fact that I took yesterday off work, it still ended up being a really busy day! Oh wait, real quick. So I am caught up through Tuesday; Wednesday was Television Night! With special guest

onatopofthings in town, joining the usual crew of

fordmadoxfraud (who was outside waiting for me when I got home from work),

fatbutts (who made some killer drinks), & James (who brought a crazy dog with him). We watched a bunch of Adventure Time until Jenny got home, at which point we switched over to sitcoms. Ben & Kate is...maybe good? Then it comes around to yesterday, to Thursday. So I took the day off, but still woke up at the usual time, more or less. I was going to cut my hair, but instead I...didn't. I went to the gym & put in a nice chunk of time. I've felt like my schedule has been erratic, but the last few times I've gone I really pumped out the jams. Then I rushed right out to do laundry; I got it all done but none of it folded-- I just dumped it on the couch before heading out again. Off...to work my CSA shift? We do this thing where we have a share in a farm upstate, & every other week we get a selection of whatever was harvested off of it; you know, super variable by season, & it lasts eleven weeks. It is run as a co-op, so every year there is one work shift. I basically showed up, carried some boxes of fruit & vegetables around, & then sat around checking names off as people came in. One of the other people working is friends with

& then after that I ran up into Manhattan to meet up with Pierce for dinner. We ended up at Trattoria Casa Di Isacco because the host said they had baby octopus, but they didn't, & it nearly broke Pierce's heart. He wanted baby octopus! & then they didn't have gazpacho! "Seasonal," they say! Bad luck for Pierce. Bad luck for Mordicai, too. Remember that time I almost choked to death, all alone at home? Well, I got to do that all over again, this time on some artichoke. You know, I was just eating the leaves a little bit too over eagerly. Not avoiding the tough scaly part. I even joked about it, "what is the worst that can happen, I get fiber in my diet?" Nope, the worst that can happen is that a chunk could lodge in my windpipe! Embarrassing; I just went into the bathroom to, you know, zen hiccup & sort of concentrate on breathing & not dying. The streak of bad luck aside, the rest of the food was good, as was the bubbles. From there we headed over to Sky Room, which was very much a hotel bar, but you know, on the thirty-something floor. Pierce spent his time flirting with the bartender, & I tried to tell my favorite shaggy dog joke, which I messed up & also no one laughed at. Jenny has basically forbidden me from telling that joke, but it is my favorite! I left then-- exit, pursued by a bear-- & took a weird combination of trains to get home, basically just in time for bed.

The Seven Sleepers,
rotting in their tombs of jade,
sending forth their dreams.

I haven't read a World of Darkness book in a while, so I picked one up at my local hobby shop. An old one, based on one of the "mystery" covens from Vampire: the Requiem. You remember back how in the original material for Vampire: the Masquerade, the Sabbat was basically a frightening bogey man, with very little known about them? Well, when they kicked off Reqiuem they created two groups like that, Belial's Brood, which are a bunch of Satanists, & VII, which is a total cipher. They will kill you for...some reason? This book tries to speculate on what that reason might be, on what VII actually is. Of course, this is the new World of Darkness, so rather than just burst the bubble of the mystery by defining it, this book speculates on three possible answers to that question. It really is a philosophy that has stood them in good stead, as it keeps the universe expanding & flexible, instead of closing it in, which was a problem that latter sourcebooks for the old World of Darkness had-- everything was just cramped, between all the zillions of supernatural critters & the looming metaplot. I like options, I like ideas, I like hints & allegations & mysteries. The three options though, I'm not really all that crazy about. The survivors of Gomorrah is the most interesting; the Manchurian Candidate is the least, but has the best mechanics to steal, so that works out nicely for me. I would have liked more Disciplines, more optional rules, but you know me-- I just want every World of Darkness book to be Mirrors.
Collapse