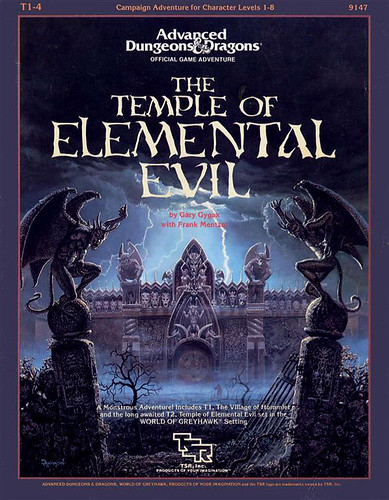 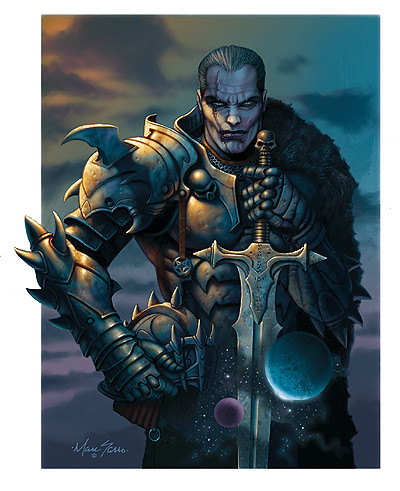 fordmadoxfraud's Stories of Our Youth AD&D campaign, & things are getting heavy...& we haven't even gotten to the dangerous stuff. This session starred me as my elf thief Curulókë of the Smiling Parliament, Rasheem as Raz Jericho the human bard, James as Oney of the Laughing Wood the elf ranger &

skycornerless as Vigda of the Lover's Fjord, the elven fighter/mage. Having killed a giant trapdoor spider last session, Dilly & (edit: Dilly had left early from last session, travelling with the soldiers from Waterdeep, & wasn't there) Aeryn was busy going into its lair, looking for loot or maybe eggs to smash. Laerth the Beautiful-- human cleric, hero of Hommlet-- was also still with us. At this point, the fact that we're going to the Temple of Elemental Evil is out there in the open, & that is...spooky stuff. I mean, part of the "Curulókë is from Ravenloft" has been me playing him as somewhat blasé to danger but easily affected by horror...but I don't think even a guy from Barovia can play off the Temple of Elemental Evil like it ain't no thing. Hey, relatedly, remember that MS Paint picture of Zuggtmoy I made, when I was making all those diabolical & demonic MS Paint pictures? Oh, speaking of geeky sidelines; I was looking at my character sheet & saw that a Strength of 15 has a max press of 170 pounds. Hey, I can bench that pretty comfortably; does that mean I have like, a 16 Strength? I went to the gym on Sunday to check. Yep, I have a better bench press than that! Of course, by that logic I must have an Intelligence of 8, because I only speak one language, so never mind.

That is Lareth up there; I guess he was the model for Third Edition's epic blackguard. So, you know, he's pretty obviously a bad guy. We were playing fast & loose with him; he was healing us, so we were giving him the benefit of the doubt, but our paranoia was pretty amazing, too. You know, talking in Elven to figure out if he knew they language-- he did-- & just in general keeping him at arm's length. Doing an image search for him I found a picture of him all messed up; I don't know if Lareth the Beautiful gets acid on his face later, or if he's always been ugly & his "beauty" was an illusion or what. Anyhow, Lareth & the group explored the Moat House at some length. We killed a giant tick, killed a giant snake, avoided a bunch of bats with soothing tunes, that sort of stuff. Found a dead guy with a bunch of cultist stuff on him, used the sigil of an Evil Eye to convince an ogre we were where supposed to be there. You know, usual adventurer stuff. Because Raz is a bard, he gets to try to identify magic items once a level-- of course he didn't roll well for any of my stuff, but James found out that the weird magic mirror he has can do all kinds of crazy stuff. Including reading minds, & teleporting. Between the mirror, & the magic medal I stole from Darkstrider, we read some sinister intentions from him, & when Vigda cast charm person on him, it all spilled out. He's an evil cultist alright! Summoned some skeletons & everything. Well, Oney was invisible (so that is what that potion does!) & Curulókë was hidden, so we jumped him & made short work of him before he became a bigger problem later on. Then I gained a level...but rolled another 1 for my hitpoints. Dagnabbit.
Collapse