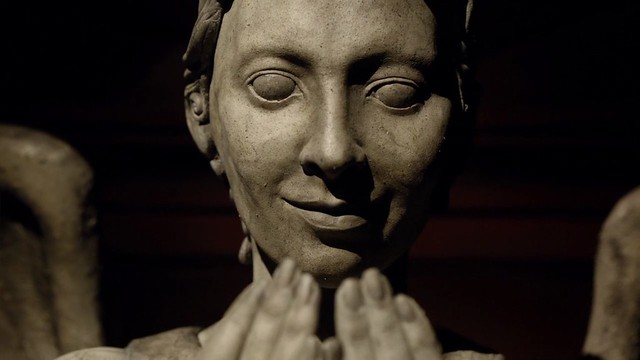 I just, just recently became a fan of Doctor Who, which is one thing that makes me want to evangelize about the show. I mean, I didn't "get" the Ninth or Tenth Doctor's series. Oh, I wasn't a hater-- go ahead & like Doctor Who!-- but I was utterly indifferent. I watched "The Eleventh Hour" after a bit of America's Next Top Model (R.I.P.) & was hooked. That is why I feel comfortable telling everyone to start there; it is what got me after all. The thing is, as a new fan, I've never had to say goodbye to a Companion before. "The Angels Take Manhattan" was my first time. I am not ready to say goodbye to the Ponds! Well, first we had "The Power of Three," which is ultimately a very cute but meaningless episode. Oh, having lots of little boxes scattered around is neat, but their ultimate purpose is mundane. For that matter, dudes, if you can suddenly, secretly, invisible? Put billions of little boxes all over the planet? Why not do that but with like, bombs or something? Doesn't make sense. Boring reveal, but I liked the character play, so it was fine with me. "The Angels Take Manhattan" was sort of similar, I guess, to Moffat critics? I mean, I can see how the "timey-wimey" stuff doesn't all necessarily make sense but I don't really care at all. You know, part of my suspension of disbelief includes accepting The Doctor as an authority on time travel. If he says "fixed point, can't be changed" then I accept it, barring, you know, two lovebirds staring at each other on the ledge of Suicide Inc. The "timey-wimey" stuff is to my preference, actually; I like "high continuity" shows, but I don't need everything to be that way. Same way I like hard SF & pulp science-fiction, both. They scratch different itches. For me, I expected an emotionally abusive-- but not manipulative-- finale for the Ponds, & we got it. Plus, Weeping Angels, which anyone will tell you are my favorites. The notion of seeing if the monsters adhered to specific rules is, ultimately, foreign to me. Which is weird, given that I'm a gamer, but not that strange if you've ever heard me rant about being a descriptivist, not a definitionalist. Whatever, there are no more Ponds, it is legitimately melancholy. 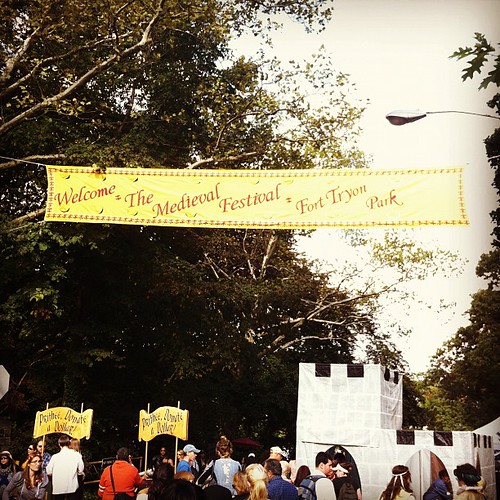 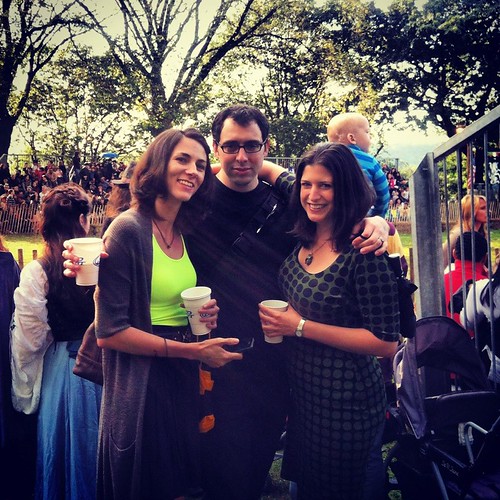 On Sunday I went to the Fort Tryon Park Medieval Faire! Jenny & I went there to meet up with Jocelyn (pictured above), Brian (who took the above photograph), Kat & her friend from the other night Chris. I really like Fort Tryon Park! You know, Olmsted's kid helped design it. Anyhow, I was happy to head up there, & even gladder to do it for a Ren Faire! Jocelyn & I are both from the Wasteland, so we have bonded over the fact that the same Ren Faire circuit connected us. Hack & Slash; Slash & Hack! For instance. Anyhow, costume-wise, the easy winner was the Plague Doctor. Those who know me well know that the Plague Doctor is the mascot of Oubliette, so I obviously was excited to see him. Second place was the Dave Strider outfit. Because of course it is. I saw Mike there, who I met for the first time immediately after the Medieval Faire, years ago. He hadn't changed out of his costume, so I knew what to look for. I expected to run into more people, though. I ate some potato latkes & a bratwurst & drank a ton of really expensive cheap beer. The bartender girl was really good at flirting. I'm good at flirting, so I am used to getting decent flirting thrown my way-- #humblebrag-- but this girl I wanted to be like "hey I know you are like, a bartender & thus a professional flirt, & it may be the ye olde time garb, but I feel like we should be pals!" Friendcrush. Bye, strange wench, back into the mists of time with thee! The joust was...really exciting? Like, legitimately dangerous & tense! Two riders were thrown by their horses! After the faire, Jenny & I went to...a strange wooden building in the West Village? I was a little grumpy, then; my tummy hurt. My stomach troubles were bad enough that Jenny & I decided to just take a cab home, which was a good call. At home we watched Castle; hey, the season premiere was...fun? We stopped watching that show when it stopped being fun, but if having them hook up restores the playful element, I'm back in. Just stop with the melodrama, already!
Collapse