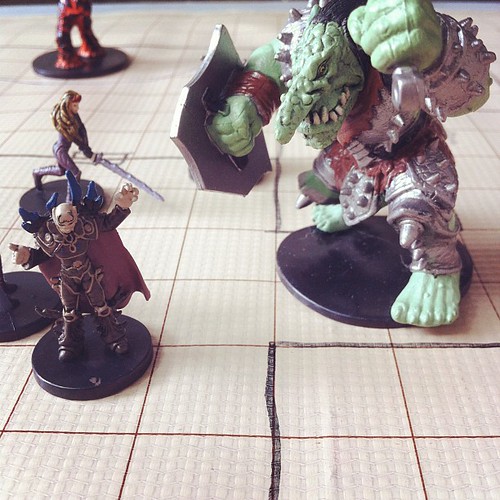 fordmadoxfraud's Storie of Our Youth AD&D game ended with a cliff hanger. A mud elemental burst up from the ground while an enraged war troll smashed through the door. Saturday's session picked up from there. Well, experience first, then I switched up my miniature; the old one was cool but when I got a cloak of elvenkind I wanted to change it up, so I changed to the one above. Then troll fight. The elemental had been summoned by

skycornerless's elf fighter/mage Vigda of the Lover's Fjord, using an item we found. Alicia's human thief Aeryn Prow of Song Mountain was sort of stuck in a room behind it, & it took her a second to join the fighting. James' elf ranger Oney of the Laughing Wood was in there Aragorn style, blade & torch. Emma showed up after a few missed session, her halfling psion Dilly Terduckener riding on the back of the other troll, not controlling it so much as goading it. My elf thief, Curulókë of the Smiling Parliament, fumbled a few sneak checks-- damn you, natural 000-- but I really owned those trolls. When we first explored Illefarn I disabled a bunch of traps & cannibalized them, which really helped out versus the trolls. Two vials of 2d4 acid & a flask of a 10' 4d6 (save or catch on fire) explosive; take that, regeneration! I'm a deft hand at dungeoneering, sometimes. 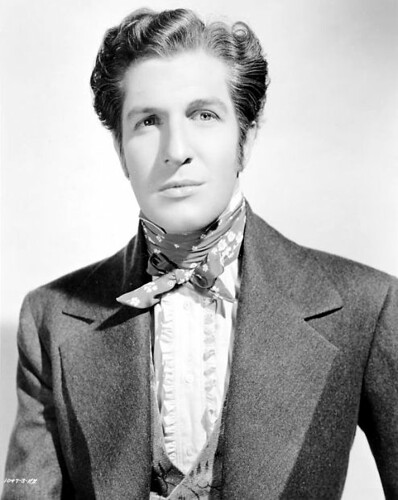 Last week, I should mention, after I passed out, Alicia's character-- who Curulókë has been flirting with-- peeked under his veil to look at his face. "Um, a young Vincent Price?" was my spontaneous stunt casting, & when I went a-googling, I was happy with the results. Putting that aside; after the trolls had been dealt with, we went into the other room, the golem room. We met dwarves, the dwarves gave us a mysterious & context-less secret password, we found a statue in a secret room & I figured out that it was probably a golem. Lo & behold, it was! Alright, between the golem & stealing firebombs to use on the troll, I worry that I might be a little meta-game abusive, but I think I keep it in check. Figuring that dwarves might have a magic golem isn't a crazy thing to assume, & David said that it was common knowledge that trolls hate fire & acid. Something that I, as a long time player, strive to be aware of, though. Anyhow, while we were fighting the trolls, the golem had been killing orcs & goblins...orcs & goblins being herded into the room by a force of cavaliers from Waterdeep! My "bagpipe plan" worked, as did my "assassinate the Direlord" plan & the "set up the golem room as a trap" plan. & the "fix the fountain & break it fixed" plan. Nice! We said the password to the golem-- "blech"-- so none of the humans were killed. Hi humans! A cavalier called General Greatshout led the troops, along with the cleric Lareth the Beautiful. 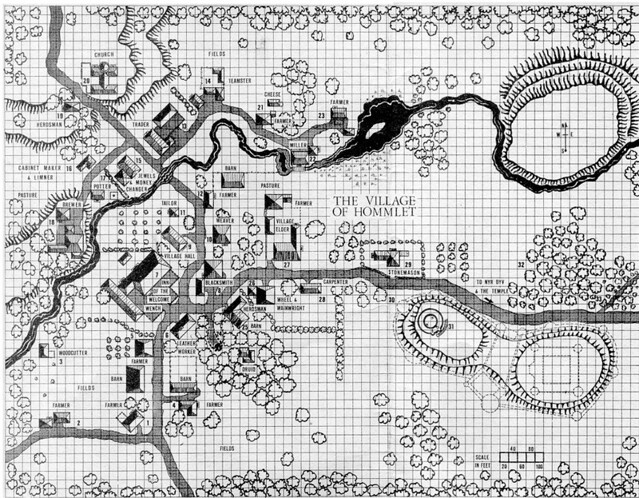 We got a map! Since I grabbed the map of Illefarn, I grabbed this one too. Actually, we got more than a map-- talking to Greatshout & Lareth, & using the mirror of teleportation that Oney found, we deduced that the necromancers from the dungeon were in the town of Hommlet, where Lareth is from. Oh great, another pretty boy cleric to be suspicious of. I had been suspicious of Liam Goldmist, a cleric from Daggerfalls that I suspect might be a secret necromancer, but Lareth seems to be above board...for now. In fact, he came with us, giving us directions to Hommlet, & mentioning off-hand that it had been the site of a great battle against some guys from an evil temple. A temple of a specific kind of evil. Like, an elemental evil. Yeah! Dude's town is next door to the Temple of Elemental Evil. Curulókë is from Barovia, his political leaders are like, Dracula & Frankenstein, but the Temple of Elemental Evil scares even him. At least it isn't the Tomb of Horrors. 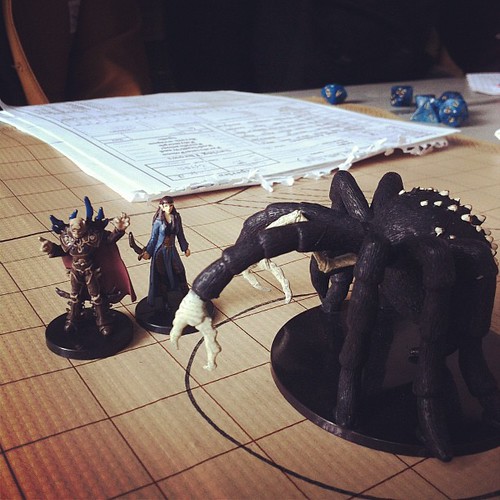 Before going into Hommlet proper, I convinced the group to swing by The Temple of Elemental Evil. I just wanted to, you know, get a peek at it. At Illefarn, the magically (& physically) sealed gates had been visibly smashed open, & even seeing if that was try of the Temple would be a useful piece of intelligence, I thought. We underestimated the risk of an open, all-out attack at Daggerfalls, & I don't want a repeat. Of course, to get to the Temple you have to cross through the rickety moathouse, which doesn't inspire confidence. That said, an abandoned moathouse might make a good base, if we can claim it & fix it up...just thinking about it. Aeryn & Curulókë snuck across the drawbridge, with Oney following them. Oney failed his sneaking checks & then Aeryn did! Not a good day for sneaking. Unless you're Curulókë, who climbed up a tower & perched nicely in-between the crenellation. "Parapets," I quipped, "more like power pets. Like a cat with lasers or a dog that can turn invisible." Of course, the moathouse has a monster living in it; it is Dungeons & Dragons, I would feel cheated if it didn't! A giant spider jumps out & grabs Aeryn. I pepper it with arrows, ducking to hide beneath my cloak of elvenkind so I can keep making sneak attacks. The spider is scary, but Aeryn escapes its clutches & Curulókë puts out its eyes with arrows; we make short work of it. 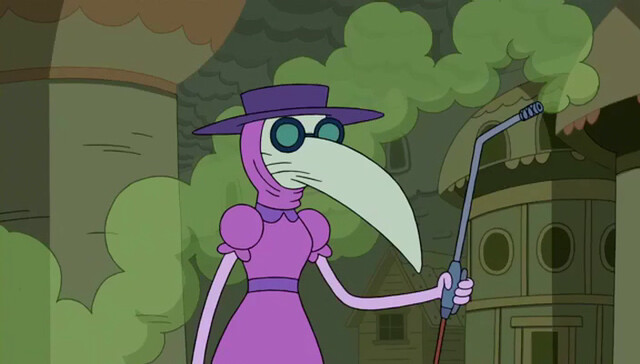 Alright, so Wednesday is easy. No Television Night, but that same group all went to get fancy food & fancy beer at Beer Table. Simple enough! Thursday was a laid back day; I was thinking I might go to the gym, but I was seduced into friendship, instead! I went to Kat's apartment with Matt. They had some errands to run, & I thought I was holding down the fort for other people to arrive, but instead they came back before too long & I beat some Kingdom Rush levels on my phone. Die, end boss! We hung out for a bit, until a friend of Kat's showed up, at which point we all split to go our own ways. My way being back to the apartment to watch some Adventure Time & wait for Jenny to get home. She did & we watched some mediocre sitcom-- Animal Hospital is not funny-- & a sort of promising detective show. Elementary, you were boring, but I like Lucy "I collect your fuckin' head" Liu & Johnny "hack the planet" Lee Miller, so I will give it a chance. Friday Terra came over after work; we were going to go to the gym together-- which we did once before-- but my stomach was all jacked up so instead we played New Super Mario Brothers & watched some Adventure Time. Man, the episode with the hyperintelligent sphinx, the eponymous "Goliad", really got to me. I am spooked by sphinxes like nobody's business. Okay! So then on Saturday morning I went to the gym, then I played AD&D, & then after the game

fatbutts with doggy Archie in Prospect Park. We played there for a while-- Olivia got excited realizing that the baseball diamond was "one big sand"-- & then broke away. Handed off Olivia to Kira & Nino & then came home to watch Doctor Who, which probably deserves its own post.
Collapse