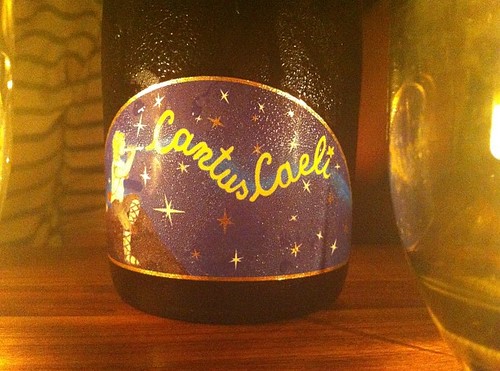 So, the food tents are back out in the park near me, which means I've been eating like a lunatic for lunch. Lobster BLT & lobster macaroni & cheese from the Red Hook Lobster Pound, grilled cheese with belly bacon from Cannibal, braised pork shoulder with white BBQ sauce & pickled onions from Mayhem & Stout, & more in that vein to come. That was all building up to last night's extravaganza at Beer Table. Jenny had given everyone a "family dinner" at Beer Table for the group birthday in July & last night we finally cashed it in. We all showed up within like five minutes of each other;

fordmadoxfraud & Jenny got there before me, then

fatbutts & James rolled up just as I settled in &

ranai was hot on their heels. The food menu was:

I have to say, the dirty rice was maybe the best part of it! It was served almost like bibimbap, with the egg on top, but not in a hot stone bowl. So maybe nothing like bibimbap, actually, but visually that is what it made me think of. Oh you know what, maybe the cornbread with the crème fraîche was the best part; Danielle & I were whispering about David & Lilly not eating theirs till the end. We suspected that they might be Terminators or something. Enough messing around about food though; let's talk beer. We all shared everything, pretty much. I ordered Grado Plato Cantus Caeli, since "Caeli" is my nom du instant message from back in the day. Apparently-- according to the fine dudes at Bierkraft who talked to me about it at some point-- there are folks in Italy who are looking to get in on the "messed up beer" scene, & this is one. It has three worts in it; beer, wine & mead. I liked it fine; others liked it a lot. David ordered the Brouwerij De Dochter van de Korenaar L'enfant Terrible which I liked better; it is a gueuze but not crazy at all; almost a cross between a gueuze & an ale. James got the Schlenkerla Marzen, because it is always nice to have a smoke beer at the table.

Jenny was the smart one, & she got a flight of all the drafts, so that is: Baird Red Rose Amber Ale, Harviestoun Old Engine Oil, Sixpoint Sehr Crisp, Drie Fonteinen Beersel Blonde, Red Hook Winery Brooklynbrusco, Brooklyn Soda Works Apple Ginger Soda. Of the batch, the Brooklynbrusco was a hit with the table; Lilly & Danielle each got a glass for their own. The Blonde was maybe the best beer; it had something cotton candy going on, Jenny said? From there, I ordered the To Øl Goliat Imperial Coffee Stout which was really nice; an unambiguous punch in the face of a coffee stout. David ordered the Birrificio Montegioco Bran Reserva, which had a nice balsamic thing going on. Danielle ordered the BFM La Meule which was maybe my favorite beer of the night; light & grassy & soapy. I like soap & grass; those were some okay Bertie Botts Every Flavor Beans. Or at least, grass is; soap tastes too much like real soap. Jenny ordered a kriek, the Cantillon Kriek, because that is how he rolls, & James finished it out with Oude Gueuze Tilquin Ã L'Ancienne. Lots of sour beers at the table last night!
Collapse