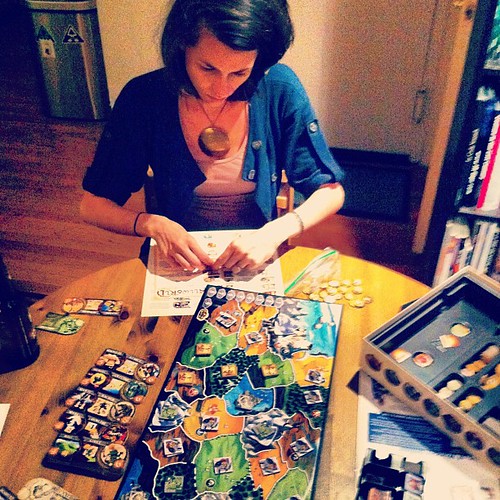 Not having any Sunday plans is actually really relaxing. Ah! We'd had our weekend dinner with Kira & Nino on Saturday, so even that level of planning was absent. What did I do with myself? Well, I spent the morning fiddling around on the internet with a break to watch Saturday Night Live. Had diner food for breakfast, Indian food for lunch. Jenny went to go get a haircut in the early afternoon & I took the chance to bust out & go to the gym. Put in my time there; actually a pretty solid workout, which means my "long but medium intensity Saturday" plan worked out, didn't burn me out. Came back from there full of sloth, though; Jenny was watching The Tree of Life which seemed really annoying, so instead I just played some Kingdom Rush. I got the premium content & I've beaten the levels, but getting a "perfect" on the level with all the haunted ents is really impossible. I finally did shower but never got around to cutting my hair like I meant to. Jenny & I played a game of Small World, which was a lot of fun; my seafaring trolls dug in hard across the globe, conquering mountains & oceans, though Jenny's bivouacking orcs prevented me from covering both coasts. Her next race was the wealthy amazons leading me to flights of fancy about post-Ragnarok amazons genetically engineered to hunt trolls in their own lairs. My last race was the mounted skeletons, who covered the board, but it wasn't enough; Jenny beat me! After that, we sat down & watched Super 8. So, that is a weird movie. I'm not sure if I liked it. It was boring, & I liked that, but the drama was manufactured, & I don't like that. It could have been a quieter, sweeter movie, in which case I would have liked it for sure, but the weird extended "action" sequences, like the explosing train or the attack on the bus? Really undercut the motion of the film. They were so long & summer blockbustery, it was a major tonal shift. That, & the E.T. ending was out of nowhere a little too much. Seemed pat & trite rather than moving. Too easy. Still, I like how relentlessly about some kid's indie film it was. After that we put on the episode of The Office that we missed-- glad this is the last season-- & then Jenny put on the craziest show. Stars Earn Stripes is about c-list (& under) celebrities hanging out with like, SEALs & SWAT dudes, & blowing stuff up. It is...weird. I guess I'm rooting for Dean Cain, because he was Superman. I'm obviously not rooting for Todd Palin. Oh, & I had the genius idea to order a banana & nutella crepe & some other baked goods. Treat yo self!

The Tomorrow Man!
Able to leap small buildings,
& one day, to fly!

I have read a bunch of Silver Age Superman stories but not a lot of Golden Age Superman, so this was a nice treat. These stories are...really weird! They actually are as subversive as they have been billed to be: Superman fights corporations as often as crooks. Let me do a quick rundown; there is a corrupt "modeling agent" talen scout, still relevant today. There is a corrupt astrologer with a "military secrets" angle, Superman versus the Hilter Youth's racist Olypmpics, Clark Kent as police commissioner-- maybe the best of the bunch-- Superman defending scientists against a Luddite witch-hunt, & a story about South American native peoples that might not be good but is surprisingly not that racist. Corporate graft, a radioactive man & a spoiled socialite-- that might as well be Paris Hilton-- round it out. Actually, this is still pretty topical, but maybe that is just because we are in the age of the New Robber Barons. Lois Lane isn't treated very well by Superman, but she doesn't seem to care; she's a bad ass. This Superman doesn't kill people but he doesn't always save everybody either. That is the "Nolan morality," I guess. I enjoyed this a whole bunch; it made me think a lot about Fletcher Hanks, too.
Collapse