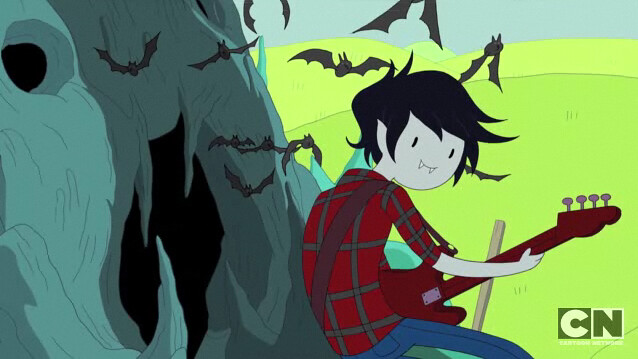 I feel kind of gross, because I haven't been to the gym all week. Now, I know I have a good reason for that-- I've been sick-- but it feels more like an excuse almost, you know? Even though that isn't rational, I still feel like I haven't been to the gym in a week. Yuck. I was going to go last night, but discretion won out; I was still going on the occasional coughing jag, & while I'm past the point of infectiousness, I know I shoot the evil eye at anyone coughing at the gym. "Hey, I'm just trying to clear excess mucus from my lungs!" is not a real good retort. Plus, I wanted to hang out with Terra, since we hadn't had a chance to in a while. So that is what ended up happening; I spent all day at work doing a big data entry project, made an appearance at a surprise party for one of our publishers, then Terra came to the CSA with me, we picked up some vegetables, ran into Aubrey, & then finally got to my apartment. What time is it? Adventure Time. Yes, I am definitely finally a convert. The first few episodes were shaky, the first season didn't quite get it together, but it is a continual upward slope in quality. We started off with "Fiona & Cake," which is the Rule 63 episode, where Finn the human boy becomes Fiona the human girl, Jake the magical dog becomes Cake the magical cat, Princess Bubblegum and Lady Rainicorn become Prince Gumball and Lord Monochromicorn & Marceline the Vampire Queen becomes Marshall Lee the Vampire King. Oh, & Prince Gumball was voiced by Neil Patrick Harris. It was...pretty incredible. After that was "What Was Missing," which features Marceline dropping some tunes. That little clip is actually the catalyst to giving the show a second chance; I was planning on it, but when I heard Marceline go all Jenny Lewis I was like, yes. "The Creeps" & "From Bad to Worse" are both two fun little Halloween episodes, & those were fun too. Oh! & since we beat New Super Mario Brother, we went back to World One to collect all the coins to open the suicidal World Nine level. Then Terra left & Jenny came home! Shift change! I had ordered sushi from Jpan for us but it was...not very good. Well, one of them was good, one of them was okay, & one of them had too much "special sauce" on it. Basically just lots of fancy mayonaise. It was...sad. I failed at ordering sushi! Sometimes getting three of the chef's special rolls works out; not last night. Then we watched an episode of The Soup & an episode of The Daily Show before it was time to go to bed. Today is Friday; a lot of people are all "woohoo Friday!" but I'm more "oh man I was sick all week & today is my last chance to catch up," so it isn't super relaxing to me. Check back after I've demolished my back log of time sensitive responsibilities.
Collapse