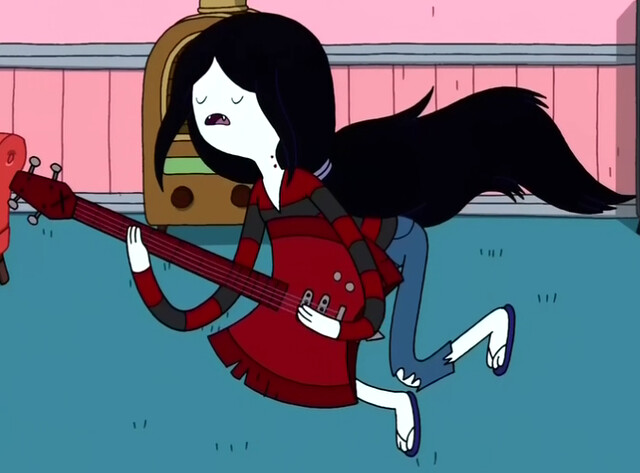 When I took Monday off sick all I did was watch a bunch of Leverage with Jenny. Still sick on Tuesday, I spent my time watching a load of Adventure Time & reading comic books. A few people told me it improved after the first season, & I think it definitely did; I mean...I watched the whole second season yesterday. As usual, the episodes with Marceline were the best. Oh Marceline, I get it, I know why the fandom goes crazy for you, but it doesn't stop me from going crazy for you, too. "It Came from the Nightosphere" was really great, the sort of "sociopath family psychodrama backlit by the end of the world" story. "Go with Me" has basically the plot of a Gilmore Girls episode, plus Marceline, so...that is really cool. "Heat Signature" was the least awesome of the Marceline episodes; it just humanized her a little too far. "Blood Under the Skin" doesn't have Marceline but does have great sound effect when Sir Slicer shows up. "The Eyes" has Kate Beaton's pony, "Her Parents" have Henry Rollins & Sarah Silverman has Lady Rainicorn's parents & "The Silent King" has Michael J. Anderson as the Goblin Chief of Staff! I didn't know he did voice work. I watched the last couple episodes out of order-- were they aired out of order? They were out of order, is what I'm saying-- but I liked the look of the Lich & the whole Exorcist angle. Still, I think the pilot episode really had a more...untainted vision of joy? Or something. Eventually, I ate some matzoh ball soup, then Jenny came home, & we had time to watch the last episode of Bunheads; just when I thought it was starting to work-- though still really just a rip-off of Stars Hollow-- they show went & dropped the drama bomb. Ugh, I don't care about melodrama, but you could rightly say that Bunheads is like a Gilmore Girls where things actually happen. Ugh. By then, the Nyquil was kicking in, so I went to bed. I woke up healed! Well, I'm still scratchy & full of snot, but some of that is just leftover, & some of it is just allergies. I'm going to work, is my point. I paid my money. & I'm going to see all the movie.
Collapse