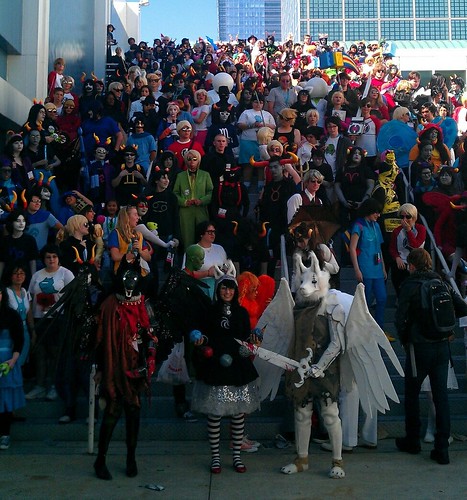 I have a post at Tor.com about Homestuck as the first great work of internet fiction. It shouldn't come as any surprise that I say that, since I'm, you know, a rabid fan. I even own all the books that have come out. All of them. The books signify the story just fine, but they...well, lack the ability to express it as well as the internet does, which is why I'm comfortable calling it the first great work of internet fiction. This is the real hypertext that academics were dreaming of back when I was in college. It is here & it is way crazier than what people thought; everyone was fooling around with basically Borges fanfic, you know? Homestuck is its own thing.

The Milestone heroes
are punching the Justice League.
I don't really care.

Reading comics on a sick day is the proper procedure. Luckily, the library near me just reopened, & Jenny & I went there this weekend, where I loaded up on comics. Hey, I'll read middle of the road comics from the library, that is a thing for me. I grabbed this because...well, because I like Dwayne McDuffie's television? Really I think his skills work better on television though. This showcases a lot of the Milestone heroes, who I want to like, but too many of them are crammed into here, with too many DC c-listers, to really make sense of. It is just cluttered. The scenes with Superman & Icon talking work, but most of the rest of it is just jumbled. The stakes are never articulated & the villains aren't credible. You can see shadows of good characteristics (pun, if you've read the storyline, intended) through out-- like John Stewart & Vixen clashing over issues of race & Black Canary struggling with a lack of authority & institutional sexism-- but they never resolve & read too much like bickering & in-fighting. Of everyone in Milestone, besides Static Shock, I think Icon has the best chance of getting some pop cultural footing-- he's like a black Mon-El, sort of-- so I am glad I gave this a chance, but it doesn't really work. 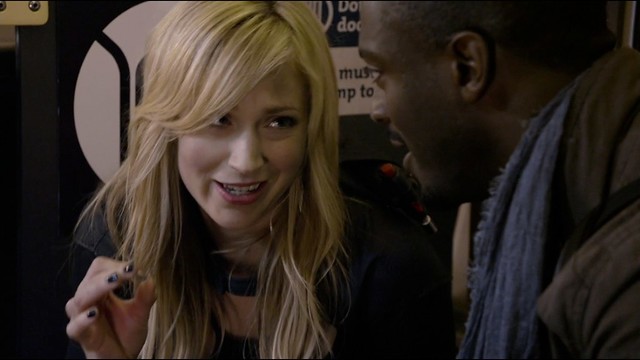 On Sunday I was all "maybe I'm not hungover, maybe I'm sick?" & then on Monday I was like "oh crud I'm sick." Seriously, is that how it happens for everyone else? You're all "oh I am so sad, I have the poet's disposition!" & then your wife is like "did you drink a lot last night?" or "did you eat lunch?" or whatever, & then you are all "oh yeah, I'm just hungry, I don't understand what emotions even are." So anyhow, I woke up on Monday & I was just a mess of bodily fluids-- like the ones in my nose, dude, get your mind out of the gutter-- & coughs & aches & breaky hearts & so I called in sick. Not only was I miserable & gross, but I've got an ethical imperative not to get everyone else sick, right? Right. Well it turns out that Jenny was sick too; she got to work & then turned around & came right home. Two peas in a pod! Which might have turned into a cuddle party, or might have turned into cabin fever, but instead was just like, regular fever. We mostly took separate naps & did our own thing. I read Dave Gross' new book, cover to cover. I'll probably make a Tor.com post out of it, or out of all three of his Count Jeggare & Radovan books, anyhow. We also watched three episodes of Leverage, "The Broken Wing Job," "The Rundown Job" & "The Frame-Up Job." Of the three, "The Rundown Job" was by far the best; it just all came together. I've been saying that this season's "nurture the team" arc is going to result in everyone building their own group, or at least getting sidekicks, & I stand by that. I also predicted that the painting in "The Frame-Up Job" was going to be naked Sophie, though I didn't see the fake wall thing, I thought that was clever, as was the "Agent Tennant & Agent Smith" joke.

This was a little bit better than the last sickday comic I read, but it wasn't a genius comic or anything. The first arc was promising-- messing with Indian mythology instead of Greek mythology-- but it is sort of undercut by the new hero, who is pretty bland, & Raven's inner turmoil, which is meaningless. Beast Boy as Hanuman is a lot of fun, though. I wasn't unhappy reading it, though there were way to many "minibosses" in the arc. The second half is a random meaningless slugfest with Superboy-Prime, & really? I don't care. Was it mandated by some huge company-wide crossover event or something? There are clones of Conner Kent Superboy-- a "bald Superboy," a "Reign of the Supermen Superboy" & a...another Superboy that is meaningless to me. That there...could be a whole story arc, that is a neat idea. Indigo is back; oh, her whole "secret Brainiac" storyline was good, but here she's a mook. It is a cluttered brawl comic, you know? The Superboy clones get stabbed in the heart with kryptonite, & while Conner says something like "that was me, I was a blank slate like them once," it isn't ever addressed. A missed opportunity.
Collapse