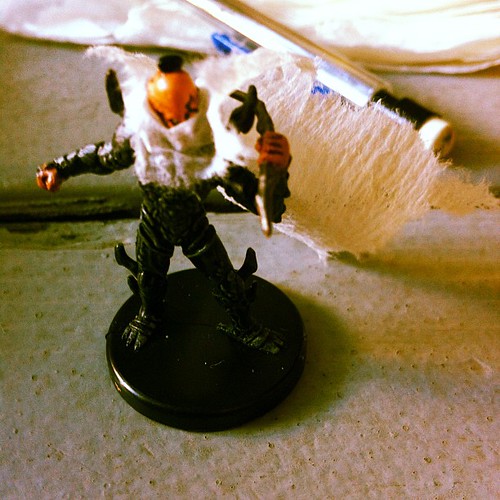 fordmadoxfraud's AD&D campaign, Stories Of Our Youth, is coming along swimmingly. Let me tell you what, a party with three elves is pretty sweet, especially if you are in a dungeon with a ton of secret doors. On the flipside, having two rogues in your party is only cool if either of them are any good at finding & removing traps...which neither my elf thief, Curulókë, or Alicia's thief Aeryn are any good at. Still, we managed not to have any of them sprung on us, though there was a close call, & we did pass out in a chamber of poisonous green gas. Let me see here; so we started at a secret entrence to Illfarin, the abandoned dwarf barrow-city where problems-- like rivers of poisonous emerald ooze-- were originating. An army of "greenskins"-- eighty-some goblins, forty-ish orcs, two trolls & four ogres-- were coming to Illfarin, either to loot it or because it is their base, I don't know. In the distance, James' elf ranger Oney saw the banners of Waterdeep, heading to Daggerfalls to presumably restore order in the wake of the lizardfolk attack & the burning of the ducal palace. By a stroke of luck, I had established Curulókë as a bagpipe player, so I snuck to the treeline, whipped out my pipes, & played a military dirge. You know, that is the original purpose of bagpipes, right? To communicate troop movements over the din of battle? So yeah, I told the Waterdeep army about the orcs & goblins, & with that done, we finally snuck under Illfarin!

Ilfarin! There are some dwarves in there acting like tough guy bullies. Sure, they are looking for their ancestral artifacts, & in fact sound like they have real archeological interests-- which soften's Mordicai's heart, but Curulókë really doesn't respond well to coercion, so all their threats & bluster really just convinced him that he doesn't give a fuck. They can have their special crown, sure, but I fully intend to loot everything else. Oh, & the medal I stole from Darkstrider, that gives me the ability to mindread? If I push it too hard, I get a headache. & you know, given how sketchy Darkstrider was acting, maybe it will turn me into some One Ring junkie if I use it too much. I've got to be careful with that. They did tell us the "secret password"-- blech-- so that counts for something. In Illfarin we...immediately find all the treasure. Seriously, elves & secret doors, baby. There was a golem-- as predicted!-- to which we say the password & get past with no problem. Fancy crown, check. Fancy armor no one can use because it is dwarf sized & also we are all non-armor users, check. Cloak of elvenkind, yoink! I put that on right away. Actually, it was "a magic cloak" until I made an ancient history check, figured out that the king whose stuff this is was named like "Elf-Friend," & ask David "um, I'm an elf-- is this a cloak of elvenkind?" Honestly, I thought it was going to be a cloaker, I put it on precisely because I was having problems separating my out-of-character suspicions. The rules for a cloak of elvenkind by the way, are ridiculous. Then, poison gas, pass out, screw that. Even more treasure follows that; mundane treasure galore, as well as a magic mirror of teleportation-- which transports Oney to the middle of some necromancers, & back-- a magic shovel of shoveling & a magic egg of...control? Who knows.

We try to set an ambush for those necromancers-- I think the "too good to be true" cleric of of the sun, Liam Goldmist, is probably a secret evil cultist, though I want him to be a good revolutionary-- but they don't act like we expect them too. More dwarves acting all suspicious, but

skycornerless's elf fighter/mage Vigda gives them the crown & I get them to remove the penalty that Curulókë & Aeryn have from the green goo gas. They also have some "ancient dwarven fountain expert" with them, who is my favorite: specialize in the craziest thing, guy! You are a credit to your civilization. He tells us how to mess with the fountain controls when we find them. Which we do! We bypass a couple of traps, which I manage to loot, even. Two vials of 2d4 acid & a 10' bomb that does 4d6 fire damage & might catch you on fire? Yes, I'll save that for if we run into those trolls, thank you. The fountain controls, of course, are broken. So that is what those necromancers were up to; they weren't looking for treasure, they were looking for the same thing as us, dang it. The fountain controls are broken so that the green slime will continue to pour into the river, & without an engineer it isn't fixable. Since I talked to the fountain guy, however, I know I can turn on the auxiliary water source, at least diluting it...& then I mimic the sabotage on the other console, so that the fresh water controls are broken on the "open" setting, as well. Clever girl! David ends the session handing out experience, I go up a level, increase my "find & remove traps" skill...& roll a five on my hit points, almost doubling what I had. Has the curse of the vampire (my in-game excuse for my anemic hit points) been broken? I can't say for sure, but the fact that I am unlikely to die from any single weapon hit-- which is how my gnome wild mage Encre died-- makes me feel much better. 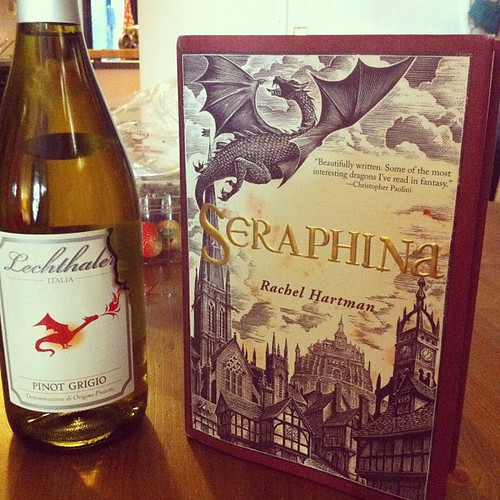 After the Stories Of Our Youth AD&D game,

fordmadoxfraud just followed me back to my apartment, because we were segueing right into The Eleven-Books Club. The book was Seraphina by Rachel Hartman., which is about...dragons & music & ecclesiastical trappings. It was Terra's pick, & she was the next to join up with me & Jenny & David. A few text messages later I found out that there were a slew of cancellations, but the other Jenny & Carmen showed up, & we'd all read the book all the way to the end, so that counts for something! I think that the big reveal that came out of the discussion for me was that I would have liked the book better if it was about elves? Which isn't actually what I mean, but-- well, the dragons in the book are Others, & they are effective Others. Making them Vulcans & implying that the evolutionary psychology behind that was their brains being required to do aeronautical calculations all the time is a nice trick. That said, I felt like the shapeshifting element really...de-dragoned them? Like, part of being a dragon is the...being a giant scaled creature, & the ease of transformation really took the wind out of that. So yeah, it might have been better if the dragons were some other critter, for me, or if they had been more...dragon-y. Jenny & I had a bit of enthusiastic recommendation of Tooth & Claw & then talked about how affecting I found Among Others. David & I talked about Derren Brown & how awesome he is & how everyone should watch a bunch of YouTube clips of his, since we don't have a lot of other options here in the United States. We all agreed that being part of a series drastically weakened the book; too many unfired Chekhov's Guns & tangling plot hooks, unfinished threads, to much "half-closure." It was a late night, fueled by no small amount of wine. 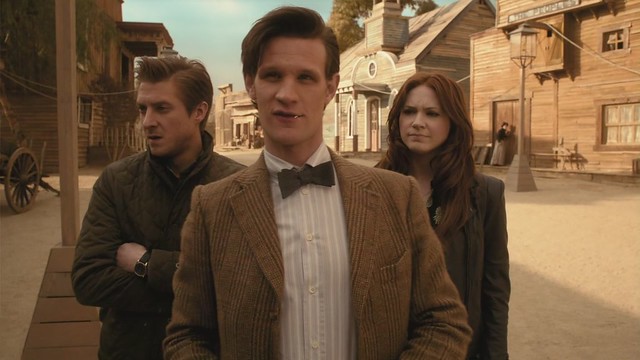 Saturday was a big day! I played Dungeons & Dragons all afternoon, then had a book club meeting all night & then Jenny & I topped off the evening with the newest episode of Doctor Who, "A Town Called Mercy." This episode had caused a bit off buzz when the season preview aired, on account of how the Doctor points a gun at someone, which I said seemed silly, on account of how previous incarnations have done the same thing & about how it was almost certainly a moral lesson about pointing guns at people, anyhow. Which it, in fact, was. More to the point, it was addressing the ramifications of the previous episode, & about the Doctor's increasingly distorted moral compass. The Doctor needs rules & ethics, because he's a genocidal lunatic, you know? Also, the Doctor needs companions, because...well, he's a mad man with a box. Also the episode had Ben Browder! Hey, remember how wonderful Farscape was? Thanks for the reminder via stunt casting. For me the episode was enjoyable, but didn't have any of the emotional cheap shots that I think sometimes elevate the story. Or well, sometimes the shots are cheap, & sometimes they aren't, & sometimes it doesn't matter that they are cheap-- "Vincent & the Doctor" for instance is full of wonderful cheap shots-- as long as they work. This show was mostly devoid of shots, which I'm not actually trying to sound critical of! The series needs to have adventures & it needs to have ethical conundrums, those are part of the formula too. So, I guess what I'm saying is that I don't really have a unified thesis on this episode. It is nice to see the Christmas List joke extended, & it is nice to see that the show continues to have character arcs.
Collapse