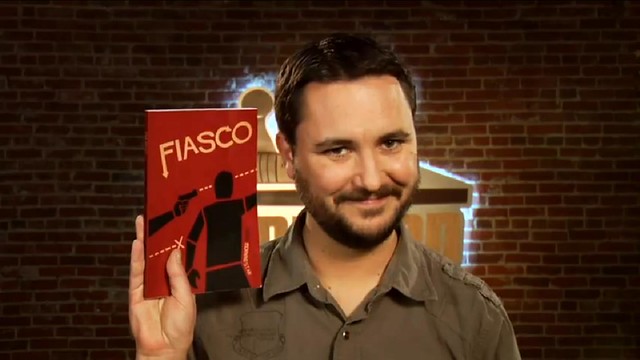 Last night was another game of Fiasco, this time with the Television Night crew! The scenario was "Suburbia," & I played Gavyn Echolls-- shout out to my boy Logan from Veronica Mars-- the goth teenager who needs to "get even with the dirty Amish," working at Hot Topic where he was "business rivals in a dying industry" with

ranai's character, the middle-aged Elaine Sommers-- shout out to my girl Buffy-- are "mutual keepers of an ominous secret." In this case, it is their human trafficking, as Taylor & Elaine grab Amish kids on Rumspringa & harvest their organs. The "unsavory object" tying them together was "a dessicated corpse in a duct taped garbage bag" from a grab gone wrong. Elaine is part of a group that is missionaries to the Amish, & is in love with

fordmadoxfraud's character Pastor Bill Fischer, who she'd previously roofied & had sex with, only to then bronze baby shoes & claim that they were intended for a miscarriage of their love child...whether or not that is even true. The thread tying Pastor Bill to my character, Gavyn? Well, child abuse. Pastor Bill molested Gavyn when he was little. Okay, Fiasco, gosh you are dark! This is less Coen Brothers & more Darren Aronofsky, huh? We only got through the first Act before Jenny came home & we stopped to hang out with her, but in that time I developed an awesome gothy teenage accent, tried to blackmail the pastor by including the line "I know the power of Darkness!" & told Taylor to go stuff herself in a butterchurn & get fucked. Also, got roofies from Elaine-- told they were "drugs"-- & went with Taylor to go see the dead body, which we then left on Pastor Bill's porch, on fire, with some Amish furniture. While taking roofies. It was...a fiasco. The Tilt was Tragedy: death, after an unpleasant struggle & Failure: something precious is on fire. There are three white dice & five black dice left, so Act Two is going to be grim! Then somehow Jenny convinced the group to watch Gallery Girls which is terrible. I don't "get" misanthropic reality television. Yes, I hate all these people, but I could go outside & hate all these people, in nature, why would I spend an hour of my life hating them?
Collapse