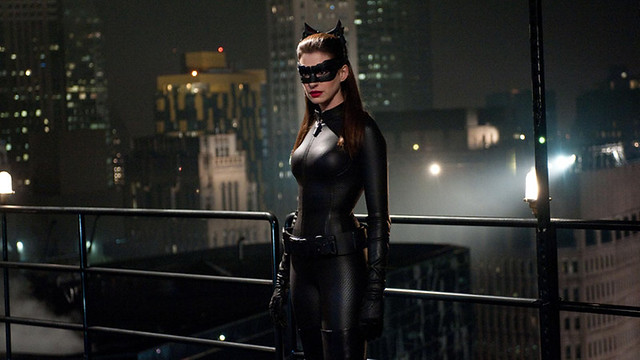 I finally went to go see The Dark Knight Rises Monday night with Terra. I'd assumed that it was a movie that I was setting aside to see together with Jenny, but she was utterly disinterested in it. Understandable; we were both underwhelmed by The Dark Knight & Batman Begins. They aren't bad movies per se, but I might go ahead & say that they have a bad Batman. Not because of Bale's "Bat-voice" which people mock, but rather because he has foolishly been scrubbed of any intellect. Batman's "detective work" in these movies consists of two strategies: punching & screaming or throwing money at a problem. This movie wasn't any different in that regard, though the opening makes it seem like it might be. The other problem with these movies is that they don't make any sense. They are full of macguffins & plans that seem clever because they are convoluted, but under scrutiny disintegrate. Like-- explain Jim Gordon's faked death in The Dark Knight. Who knew? Who didn't? How does it make any sense as a plan? It doesn't, it only makes sense as a narrative contrivance. Oh, & at this point, spoilers follow. This movie has been out long enough & besides, everybody knew Marion Cotillard was Talia al Ghul & that there was something up with Joseph Gordon-Levitt. Come on. Anyhow, making Talia the child that climbed out is an interesting "twist"...except for, you know, the rest of the movie. Like all of Bane's patter throughout the movie; "born in darkness," that sort of thing. How does that make sense given the reveal? Or, you know, all of Bane, actually; I thought Nolan did a great job with Bane, up until he won; but I'm getting ahead of myself.

My big hope for this movie was that Anne Hathaway would fill the role of Catwoman in the same way that Heath Ledger brought a glorious magnetism to the Joker, & I was not disappointed. Much the same way that I said you should see Dark Knight for Ledger's Joker, you should see Dark Knight Rises for Hathaway's Catwoman. She says smart things, she behaves in believable ways, she oozes charisma, she kicks ass, she's just really great, top to bottom, front to back. Plus she wears a catsuit really well, I won't pretend I didn't notice. Her character arc is also the only character arc I've given a damn about in any of these three films. Catwoman! She's joined by Joseph Gordon-Levitt's John Blake, who is...maybe the only ethical person in these films? Seriously, the hard scrabble cop who when pressed to make the hard call makes it in the cause of justice & bravery? I'm really sad that John Blake is Nolan's excuse to make a "Robin" joke, writ large, because he's probably the only admirable good guy in any of these movies. That, & Catwoman's redemption; the one ultimately hopeful piece of storytelling in these films. I am really into the Catwoman story here.

Tom Hardy's Bane is really great...like I said, until he wins, at which point Nolan's weird authoritarian politics go crazy. For most of the film Bane is a terrifying villain, whose brutalist ideology builds a believable cult following out of the dispossessed. Really, for most of the movie, Bane espouses a hardcore revolutionary dogma that progresses with glacial inevitability. You don't want to mess with Bane, especially if you are the milquetoast Batman whose primary defining trait is that when the chips are down he'll compromise his morals, whether that means letting Ras al Ghul die or warrentless wiretapping or lying about Harvey Dent so that unjust legislation can pass. Of course Bane demolishes Batman; Bane believes in something. Then when Bane wins, you realize the actual undercurrents-- Bane is Occupy Wall Street, which if left unchecked in the Nolanverse will result in the Terror of the French Revolution. It really doesn't make any sense, which is fine, because the rest of the narrative is about undercutting him as a character in favor of the fourth act villain, Talia al Ghul. I say fourth act because damn if this movie isn't really, really long. Marion Cotillard's Talia doesn't have enough time to shine or define herself, which is a mistake; moving the timeline of this movie up-- maybe by not having such an ill-conceived & lazy macguffin?-- would have served her well. Give her her own story, instead of just re-appropriating Bane's.

Sorry; I'm going to keep saying bad things about this movie, but I want to reiterate that Anne Hathaway kills it as Catwoman. Whenever she's around, the movie is elevated into being a good movie. Same for Hardy's Bane, for the first half. Christian Bale's Batman is bankrupt, but I don't blame him; the Batman of these movies isn't compelling or ideologically sound. When he climbs out of Peña Dura in Santa Prisca things get a little bit better, but then "I punch you, tie you up & you have a hallucination" is an even worse cure for a broken back then a psychic doctor, which is what the comics had. Come on, paraplegics, why don't you just want it more? Oh, right. I wanted to complain about the macguffin. So, Bruce Wayne-- you invent a cold fusion reactor that can give clean sustainable power, but you mothball the project because under extreme circumstances it can be rigged to become...a two megaton nuclear weapon? That is...not really that big? I mean, I'm just saying that nuclear weapons with equivalent payloads already exist, so it isn't like you would be disrupting the balance of terror. So what is the problem here? I don't get it, & by the way I would like to point out that you are embezzling billions of dollars to fund weapons research already. I mean, I would normally "comics logic" that point, but since somehow these are supposed to be serious-- they aren't!-- I figured I should bring it up.

So here is the thing. Batman, what, retired? Fakes his death? Alright, I am okay with you wanting a closed story. I respect a lot of the choices made in this trilogy on that basis, actually-- this is his interpretation of Batman, & Nolan actually interprets it. I don't like a lot of choices, but I am totally okay with him making choices. Which is what bugs me about John Blake. Seriously, they reveal that his first name is Robin? Listen, Nolan, I get that you were all smug about Robin, like you were too cool to have a sidekick. Okay, I agree that your interpretation isn't really suitable for a child fighting crime. Really though, your solution is to just...make it into a joke? I'm annoyed; I really like John Blake! He is one of the standouts of the movie-- I mentioned Catwoman right?-- but making him the inheritor of the Bat mantle is just...off. Listen Dick Grayson was a cop for a while. You could have just called him Dick Grayson & I would be fawning all over it. Hell, Jason Todd, Tim Drake, Jean-Paul Valley, you could have gone for the deep cuts, but this "oh his first name is Robin!" is just trolling the fan base in a way that leaves a sour taste in my mouth. Also messing with the Batman & Alfred dynamic. & killing Talia when I was all primed for her to be pregnant with Damian. & not just having Ras al Ghul be alive anyhow, because, whatever, who cares, Lazarus Pit or something. I don't know, you took too much & too little from the source material. I just don't like your interpretation! You have glimpses of The Batman-- "swear to me!" & the bit in Hong Kong & this movies sequence with Batman & Catwoman in the tunnels-- but you fail him, ultimately. You get the villains more than the hero, which I understand; I think that happens in sometimes. They are all razzle dazzle. I think maybe you lack the sincerity necessary, Mister Nolan. You know who doesn't? Grant Morrison.
Collapse