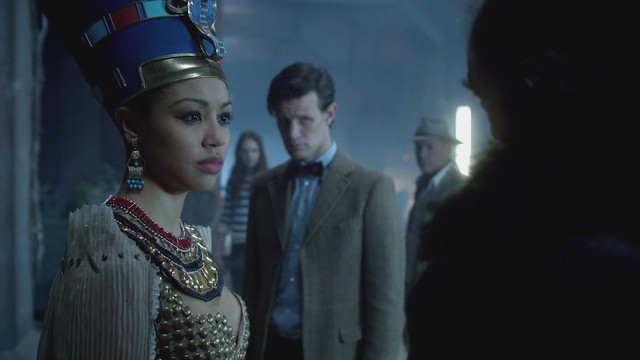 I thought "Dinosaurs on a Spaceship"-- great title by the way-- was the first Doctor Who episode with dinosaurs, which struck me as odd at first. I mean, time travel & dinosaurs go together like...I don't even want to say peanut butter & jelly, because they go together even better than that. Gin & olives? No, I guess some people prefer Gibsons. Anyhow, they go together really well. Then on second thought, I remembered that Who has traditionally been a much lower budget show, & besides part of the point is that the Doctor really likes humans. Anyhow, the Doctor met dinosaurs in "Invasion of the Dinosaurs" so nevermind. I liked the episode! I liked the back history of the ark-- making it a Silurian vessel made sense-- & I liked that Rory is an honorary Weasley. I liked Amy's bluster & I really liked Nefertiti. Not one of the best episodes, but if this is what this seasons "filler" looks like, I'll take it! Oh, anyhow, before that we watched the MTV Video Music Awards, which were largely bereft of meaning for me. I don't care about most of those musicians, even the "establishment" acts like Pink are people that I vaguely like but don't have any real connection two. Easily the best moment for me was when PSY came out. Also, Jenny & I destroyed a bottle of wine & a couple of cocktails along the way. Earlier, we'd babysat Olivia for a bit & I'd finished a book & gone to the gym. Oh & even earlier we got caught in the rain from a tornado when we were out getting breakfast crêpes. I was umbrella-less & was soaked to the bone. A fun Saturday, all things considered. Since I'm going reverse chronologically-- timey-wimey-- I will also mention that on Friday night Terra & I beat The New Super Mario Brothers, so take that, Koopas!
Collapse