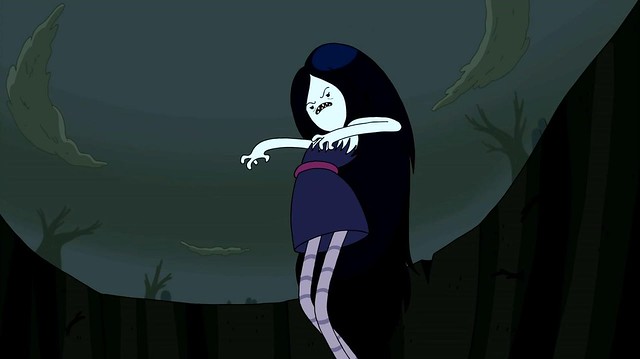 Last night was Television Night, the first in a few weeks. I played some Resident Evil 4 before people got there: basically all of the stuff outside on the island, with those guys who have the taser escrima sticks like the Lieutenant from Legend of Korra. Then things got started! A couple of days ago I had shown

ranai the first Adventure Time episode with Marceline, but Jenny came home before we could watch the second. Lo & behold, when Danielle & I went to watch it last night, boom,

fatbutts & James showed up with their dog Archie. We still ended up watching the "Henchman" episode of Adventure Time but it took a little doing. Lilly convinced

fordmadoxfraud to come over even though he was thinking of bailing on account of work & funerals; she didn't know he was at a wake! Still, it worked, so score one for Television Night! The tenor of the evening was...crazy. Danielle & I were the sane ones, somehow! We were a team, while Lilly & James were insane. David mostly drank his whiskey & played with the dog. We watched three episodes of The Soup since it was on demand & just the kind of bubblegum the room needed. Yeah, no, we didn't watch America's Next Top Model, because...well, frankly because last season wasn't very good, & because this season they got rid of the standard set of judges. I'm unimpressed; I still like you, Tyra, but not enough to suffer through mediocrity. Anyhow, everyone was getting ready to go when Jenny showed up. Hello my love!
Collapse