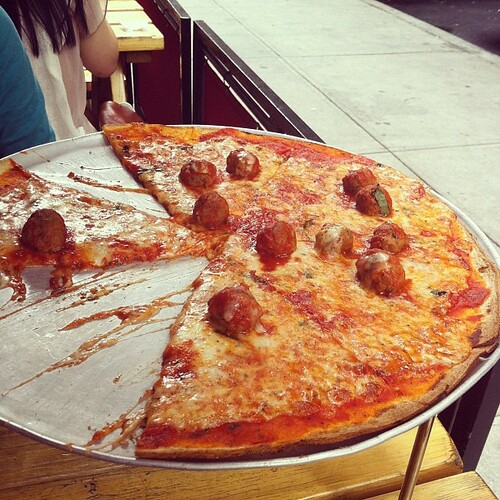 Well, Tuesday sure turned out to be a social day; not what you'd expect from bloody handed Týr! It started with Terra & I going out to lunch & kind of going a little crazy at Tappo. Our normal plan is to get a large salad & a large pizza & split it, & then to complain that we ate too much, because really that is just enough food for three people. We always claim we'll save some but...not so much. This time we experimented with...skipping the salad? Which, okay, already the logic is backwards, but we took it to some genius next level epicurean stuff by getting meatballs on our pizza. Then from there; oh, side note: what are people's strategies for buying umbrellas? I had one of those crappy ones you buy from guys on the street for years; it must have been the first one to roll off the factory floor one morning, because it was just well made & never failed me. Until I was caught in a tornado a few years ago; that wrecked it. Ever since then, my umbrellas have gone the usual life cycle of "use thrice & then it will disintegrate." I feel like getting moderately expensive ones hasn't helped, & I know if I get a really expensive one I will lose it or something. I don't have an easy answer!

I ask because my umbrella-- the one I bought when I was stuck in rain on the way to Crocodile Lounge-- broke again last night when Brian & I were on the way to the wine shop. I bought some bubbles & we headed to Matt's to hang out; we played a game of "Pancakes or Waffles?" where you chose between two concepts, & the loser is anhilated as a Platonic ideal. "Waffles or Blue Jeans?" is the standard follow-up, for instance, & you go down till nothing is left. "Art" went pretty far for us, since we defined it as "ascribing meaning to symbols," which is an accurate but really crucial necessity for being, you know, not an animal. Still, I couldn't help laughing at us, like a bunch of French salon-goers, professing their devotion to Art. Jocelyn came in at the end, then things got a little grimdark, but then we all played a rousing (if sloppy) game of New Super Mario Brothers. I was literally no help. None at all. At least I didn't kill anyone else.

Mid-game, my pocked buzzed: Jenny wanted to go on a date! Heck yeah I want to go on a date with Jenny, she's the best. I polled the room on where we should meet & almost in jinxy unison, Brian, Jocelyn & Matt all said we should go to Bianca's. Alright, then, it is decided! R to Union, transfer to the 6, & there I was. Here is the deal; while you wait, you go next door to the wine bar Von, grab a drink-- since I'd had Prosecco earlier I jumped at Jenny's Lambrusco suggestion, all bubbles, all the time!-- & when the table is ready you just bring your drink with you. A nice suggestion, a really pleasant set-up. We started with an artichoke heart salad, which was fine, & then some liver, which was fantastic, All smothered in gravy with bread to sop it up? Yum, organs. I had the gnocchi with Gorgonzola & Jenny had the sliced filet mignon; both really good. Gluttonous Tuesday! When we got home I wanted to drink a beer & hang out, but I was too exhausted & I ended up falling asleep.
Collapse