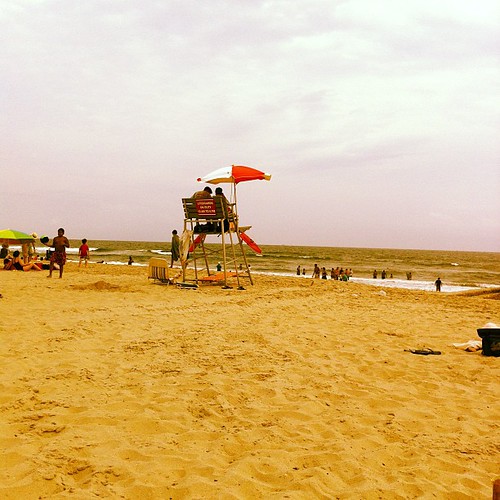 I like a 640 image width normally, but only for rectangles; squares top out at 500. Sorry, Instagram makes everything...square. On the plus side, I like it as a sharing platform. Anyhow, on Sunday Jenny & I went to the beach with James &

fatbutts. They have a car now, & while I'm in general an opponent of cars & a proponent of mass transportation, I have to admit it has a certain facility for getting you to the nooks & crannies of the world. You know, "the world" being the outskirts of Metropolis, obviously. We went to Jacob Riis Park, which-- well, remember when

fordmadoxfraud lived at the end of the world? You had to take a train to the end of the line, then take a bus from there to the end of the line? Well, the beach is a ways past that. The Atlantic was roiling & kicking, waves & tides, & thus a lot of fun. James gave me & Lilly a lot of good bodysurfing tips & I caught a number of...gnarly waves? Also I had my toe savaged by crabs more than once. Seriously, crabs, gtfo. Everyone made fun of me when I came back from the concession stand with a ton of fried food, but when they ate it they all reconsidered. Concession stands never change their frying oil, so it is all cancerful & delicious. Seriously, delectable carcinogens. Then more playing in the waves! I'm actually pretty beat up today; between the subburn & the soreness from swimming against the waves, I'm covered in strange aches. I was planning on the gym today, but I think that was a bit optimistic! Anyhow, after the beach we came home & Jenny...went to work. I played some Resident Evil 4 & watched some Adventure Time with

ranai-- I showed her the Marceline episode-- & then Jenny was back before it was too late. We capped off the evening heading over to Kira & Nino's for sushi. Olivia is super into her mom these days, you gotta coax her into paying attention to you & even then, meh. She's unimpressed. Today...well, nothing much, so far. Oh, & Among Others won the Hugo for Best Novel, which I was hoping for. That book really knocked the wind out of me. The Neil Gaiman Doctor Who episode, "The Doctor's Wife" won for Best Dramatic Presentation, Short Form, & he totally deserved it, but I have to admit I was rooting for the dark horse "Remedial Chaos Theory" from Community. Otherwise, I finished getting all the stuff in Kingdom Rush & I am playing some more Resident Evil; I can hear the chants & whispers of cultists right now, since I have it paused.
Collapse