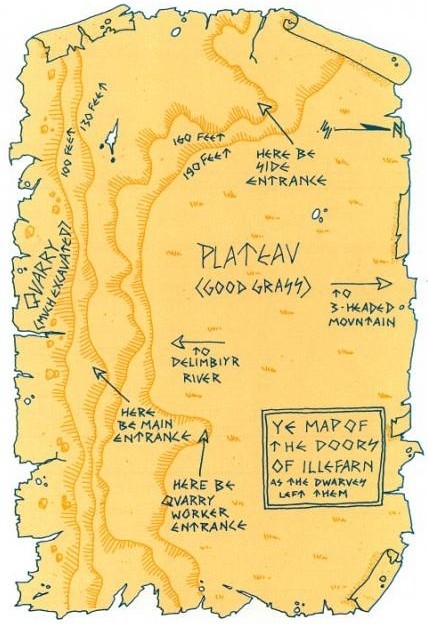 Illefarn! The abandoned & doomed city of the dwarves! In

fordmadoxfraud's Stories of Our Youth campaign, the first module he's been using is Under Illefarn, & after...a not brief number of sessions, we are finally there! Not beneath it yet, but present! That counts for something. last session ended with an earthquake & a lizardfolk attack. This session picked right up there in the continuity; Aeryn-- the human thief, played by Alicia-- dragging the dead elf druid Nara's body into the church while Oney-- James' elf ranger-- & my elf thief Curulókë tried to help people out around town. A dwarf was trapped under a ton of rubble, & trying to use a block & tackle to lift it off, Curulókë rolled a critical failure & crushed him...& then looted the rings off his fingers. You never know! It is weird to play a system where rolling a 20 is a bad thing. Anyhow, disheartened by his failure to rescue the dwarf, Curulókë decided that the right thing to do was to ignore the cries for help around him & make for the Duke's library. After all, the evil in Illefarn is ultimately responsible for these attacks; stopping it at the source will save more lives in the net summary. Also, Curulókë is True Neutral-- I figure as a sort of utopian communalist, he is more interested in being neutral between law & chaos-- good & evil is almost academic. So off he went to try to find the secret location of Illefarn; after we rescued the elf king Mellendryk he told us the place was hidden & had wards around it keeping out elves of the Laughing Wood, so we had to actually hit the books. Except, once I got to the duke's palace-- giving a big thumbs up to the looters, go ahead & redistribute that wealth!-- I was reminded that I can't read! I keep forgetting; I just take literacy for granted. Still, I can look at the pictures, & I found something, something interesting-- an invisible page! Dunno how to read it yet, but I found it. Meanwhile, Oney & Aeryn met Vigna,

skycornerless' new character, an elf/mage from the Lover's Fjord. Curulókë, if you recall, is an envoy from the Smiling Parliament; Vigna is similar, sent by her people to deal with this situation. We eventually questioned the dwarf Redbeard that we rescued from a burning town, & he gave us a rough idea where Illefarn was. Off we went! I figured out the the medal I stole from Darkstrider is actually an amulet of mind reading or something, so that is pretty great. I don't know what the Laughing Wood charm does, but I know it is magical! I used the amulet to read the mind of a hermit living in the wood-- it wasn't helpful-- & then tada! Like I said! We got to Illefarn!

I have to confess: I've been terrible at holding up my end of the Eleven-Books Club. We all sort of have! Last month was the crazy month of July; remember, when I went to an immersive Much Ado About Nothing, then to see Twelfth Night in the park, & then Alan Cumming's one man Macbeth, saw Cate Blanchett & Hugo Weaving in Uncle Vanya & capped it off with Sleep No More? & had a karaoke night with Gothamist? Well one of those weekends was supposed to be a book club meeting; actually, it was a whole different night, when we had hibachi & karaoke instead of book club. So I'm not entirely to blame; or well, I am, I am the boss of my life. Just kidding! Jenny is the boss of my life, but you know, I have like a strong vice-president position. Anyhow, that month's book was

ranai's pick, & she picked Dovekeepers, which everyone pretty much hated. I thought it was getting rolled over to this month, so I just skipped it, but it turns out I was supposed to be reading The Lost Memory of Skin, so I was double whammied! Though also, people told me I would have hated that book, too. I don't know, probably; it sounds like it. I like the existence of that sort of "part commercial, part literary" niche; there is a guy I work with who is really good at rescuing one of them a season & elevating them out of the mid-list, which I admire. I am not much for reading them, though. They usually make me crazy. The crew was me, Jenny,

fordmadoxfraud, Carmen & Beatrice. Small, but we powered through. This was another "line in the sand" meeting, like the Poisoner's Handbook one, where it is by will alone that we keep the club from falling apart, I think. Anyhow, I have nothing to add about the books-- didn't read 'em!-- but we mused that in retrospect The Big Year doesn't seem so bad! For me, The Yiddish Policemen's Union is still the best of the bunch, & Novel With Cocaine is still the worst, though I imagine if I'd tried to read either of these, I might have changed that last one.

After the book club, though, things got real; I busted out Fiasco! After adoring the TableTop episode I was eager to play, & this was the first concrete chance. Well, maybe Friday was a chance, too, but it didn't happen; last night, it did. My impression of my wife, ladies & gentlemen: "did you just trick me into playing a roleplaying game?" Gotcha! Well, it wasn't a trick, but yes! So, for posterity! We played the scenario "Main Street," aka "...In a Nice Southern Town." I was Henri Elysee, pronounced "Henry Elease," & I was a dumb kid who had done some jail time for meth possession. Beatrice was my grandmother, Coco Elysee, as in first name Chanel. David was Victor Vidalia, a New Jersey cop new to the south, & my parole officer. What I know, from overhearing a conversation, is that Victor is a dirty cop! Coco is in love with Janice Trulucke, Jenny's character...also known as the Crystal Butterfly, the kingpin of the Louisiana meth trade. Meanwhile, Janice's enforcer is The Scorpion, played intimidatingly by Carmen. Seriously, you don't want a visit from Muriel Buckmaster. & to make the circle complete, The Scorpion is the wingman & drug buddy of...Victor Vidalia. What a fiasco! Just looking at the outline of it. I can see why five people is the max; a four person game is much more manageable, I think. Things are even more muddied by the fact that Coco wants to get respect from Janice, that Victor & The Scorpion want to get laid in a big way & that The Scorpion & the Crystal Butterfly want to get even...& have tons of napalm they cooked up from an old Vietnam recipe to do the task. Things went south pretty fast; a lot of the action centered around the Municipal Building on Commerce street, the location we had. Actually, the thing I'm maybe proudest of was how well utilized the Municipal Building was by the group. We hit The Tilt pretty hard & got Mayhem: An Out of Control Rampage & Innocence: The Wrong Guy Gets Busted. Getting busted is sort of the least of people's worries; the whole town ended up burning & not a few characters ended up with a few bullets in 'em. It was a lot of fun watching all these terrible things happen to everyone!
Collapse