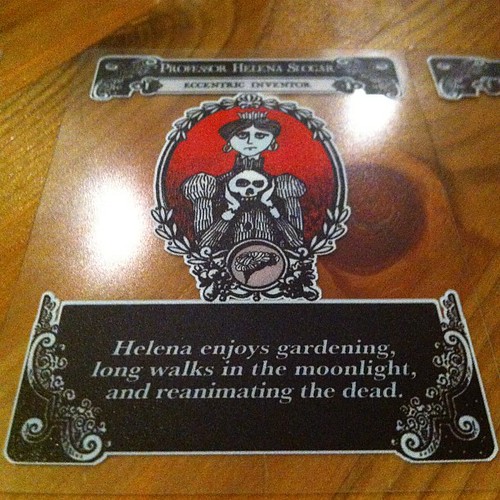 fatbutts & James & their dog Archie. On the menus were tongue tacos-- no wait, beef tongue sopes, not tacos-- which were pretty friggin' incredible, emphasis on the "edible." I had given Lilly Gloom for her birthday after seeing the TableTop episode about it, & last night we finally put it to the test. The premise of the game is simple-- you have an Edward Gorey-ish, Addam's Family-esque clan of five people, & you want bad things to happen to them, & then you want to kill them. When Professor Helena Slogar was excommunicated & burned at the stake as a witch, that was wonderful, though obviously having her daughter Melissa Slogar watch her burn & end up haunted by horrors was just gravy. Similarly, you want to punish your friend's families with terribly merry results. Wonderful wedding bells, blissful blessings from bishops-- I shudder to think of it. The cards are all transparent, with penalties & bonuses that stack & overlap. The real fun is the narrative that you the play invent to get from "charmed by the circus" to "condemned by the church." I'd just started rewatching Carnivale with Terra, so I had some ideas. In my case, it involved a sexual side show & harlequin babies.

ranai came home in the middle of this & had no idea what we were doing. She just heard us saying things like "she became so sad she got tuberculosis!" & "the family never admitted the twins problem, but eventually the family patriarch decided to 'do the right thing' & see them married. To each other." When Jenny came home we ended the game, with...did James or David win? It wasn't me, I think I was last place. We cracked up for a while about the chocolate bird, & then we put on Storage Wars for a bit. Next thing you know it was somehow eleven o' clock & time for everyone to read. You know, it is really weird that modern English still uses the o' as an adverb. I mean, having something archaic like that stick around with a particular term, like jack-o'-lantern, that isn't weird, but people say "o' clock" all the time. Just strange to me. I need more coffee. Oh, & I just remembered! I had a dream about being at this Robyn concert. Almost no one came besides me, & Bjork was there & we kept making crazy eye contact.
Collapse