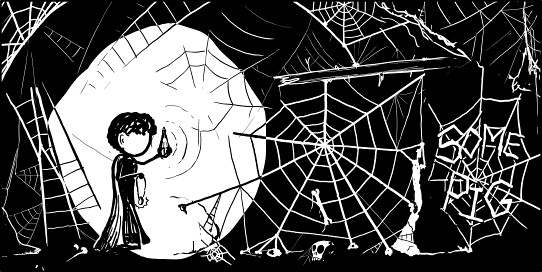 I wish I could remember the Dream of the Pirate Queen. I have this place in my memory; a place I keep coming back to. Not as often as The Mountain, & I don't think it is a significant mythopoeic location, I think it is just pieced together from scraps of childhood memories. It is a beachside property, with the sand going all the way up to the tiles; the tiles lead directly into gender segregated communal showers. Those lead up & out into a performance theater; I think it is a church, actually, but whenever I'm there it is being used as an opera house or a venue for plays, not for sermons. Anyhow, I was here, standing on the edge of the beach, trying to keep my feet from being covered in sand, when I saw the ships approaching. They were more than sinking; they were under the water, with all the crew & passengers gathered up on elaborate crows nests. I wasn't sure if it was a tragedy or if they were some kind of submersible. Other than the image of the sinking ships, I'm not really able to remember most of it. The queen had been a concubine, part of a harem that overthrew the sultan & set themselves up as rulers. I must have gotten lost in the ur-showers that the dream's location were based on, since I had a part of the dream where I was hiding in the women's shower-- not spying, hiding-- & trying to remain undiscovered while lots of people filed in. I was in a niche covered with a towel, like a kind of jury-rigged booth, but I worried my decidedly unfeminine feet would be remarked upon. There was also a whole elaborate chase scene through trains; subways, amtrack, PATH, the whole shebang, but I won & caught up to whomever I was looking for. 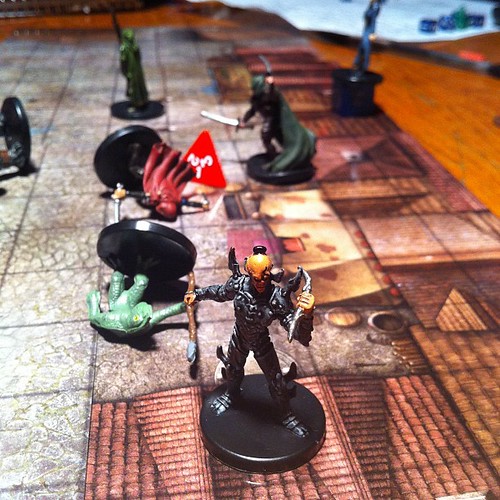 Saturday is the day for

fordmadoxfraud's Stories of Our Youth AD&D campaign, where I play Curulókë, the elf thief from Barovia. I am third level but only have seven hit points; scary. My companions are Alicia's human thief Aeryn, Rasheem's human bard Raz,

skycornerless's elf druid Nara & her animal companion Bogden the bull, James' elf Ranger Oney, & special guest Radarless' human paladin, Hadrian. last session ended with our group handily executing a pack of goblins who were chasing the wandering elf king, Melendryk, who is semi-secretly Oney's father. Because Oney is basically prince Zuko. I talked to Melendryk who told me that the elves of the Laughing Wood have a geas banning them from interfering with the ruins of Illfaren, a former dwarven kingdom where an evil grows. This of course explains why his son, Oney, has been exiled & disowned; Melendryk intends for his son--now no longer an elf of the Laughing Wood-- to deal with the situation. My character, Curulókë, came from the Smiling Parliment of elves in Barovia-- home of Count Strahd von Zarovich, D&D's Dracula pastiche-- to deal with the evil growing there as well. We've also signed up with the revolutionaries in Daggerfalls-- the city that keeps the party in indentured servitude-- & while my character is very much of a Enlightenment Era Revolutionary mindset, he suspects that the revolution may be backed by the evil of Illfaren, seeking to undermine the city's defense...thus meaning that whatever monsterous masterminds wait in the ruins, they must be dealt with before the overthrow of the decadent aristocracy. I gave Melendryk the elf king back his ceremonial dagger. Oh & I found an image in Broxo that I am using for my ceremonial dagger, since that is apparently an elf thing:

From there, things got...dark. Raz, the bard, scalped the goblins. That bit of gore rattled Curulókë, because he left Barovia in part to get away from that Ravenloft kind of horror. The party met Hadrian-- "Black Rider," as James dubbed him-- & argued about how to proceed next. Hardrian wanted to take them back to meet with Liam Goldmist, the cleric of the sun god, but Oney wanted to go investigate a pillar of smoke rising in the distance. We took a vote, going to Liam won, but Oney decided to go off on his own, & the rest of the party acceded to his wishes & followed him. Curulókë & Aeryn decided to follow them discreetly at a distance, & Curulókë was super flirty with her-- he wants to hook up with her & Raz, I wonder if there is a human thing going on?-- but all that changed when they woke up to see a pile of orc heads under Curulókë's tree-suspended tent. Eek! Curulókë panicked & ran to the campsite, where he proceeded to rifle through everyone's belongings looking for wine or liquor. Failing that, he decided to smoke some of the herbs they'd "liberated" from the caravan. The bard had said they could be smoked earlier, & while Raz was partly joking, Curulókë didn't know that. Anyhow, a good constitution check meant that it actually worked-- the herbs were due to be made into healing potions, so David gave me a temporary hit point. Fun! As someone who has Dungeon Mastered before, I'm pretty sure that David just rolled "the party finds a pile of orc heads" on the random encounter table, but seriously, if you found a pillar of heads? The same day you watched your friend scalp a dozen humanoids the size of children? You'd freak out too. 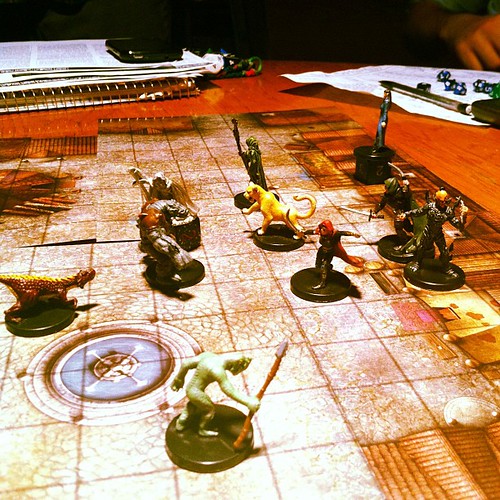 The pillar of smoke was a small suburb of Daggerfalls, burned by lizardfolk! Lizardfolk don't normally come out of their swamps-- the evil of Illfaren is stirring. We found a dwarf named Redbeard in a hidden root cellar-- thanks, elf powers!-- & brought him with us back to Daggerfalls...where the walls were unguarded. Aeryn & I climbed up them-- being a thief rules-- & I yelled at the guards, who were busy watching a hanging. Uh oh; it was the guy who recruited us into the revolution swinging in the noose. Somebody had brewed a bad batch of beer-- Aeryn!-- & killed a bunch of people, but the Potter's Guild was taking the blame...or at least, someone was putting the blame on them, probably to, you know, have an excuse to hang dissidents. Darkstrider-- the Master of the Hunt-- was involved as well, since someone-- me!-- stole his prized possession. We avoided the hurlyburly & went to the temple of the sun god, only to find it boarded up in the wake of the poisonings. We broke in & were investigating...when there was an earthquake! There had been tremors all morning, but the bard told us that these were local happenstances, & Curulókë inferred that the rising cancer of Illfaren was behind it. This was a full shockwave, throwing people to the ground...& bringing the walls of Daggerfalls tumbling down. Lizardfolk! A brute, a spellcaster & a host of grunts. Those of us with bows stayed behind cover & on the rooftops, peppering them with arrows. Hadrian jumped a wheelbarrow, which was cooler than it sounds in the retelling. I dropped a lot of people-- I rolled 32 points of damage on one of the grunts, a critical on a backstab-- but just as the fight was going our way, Emily's character Nara was killed. Alas! 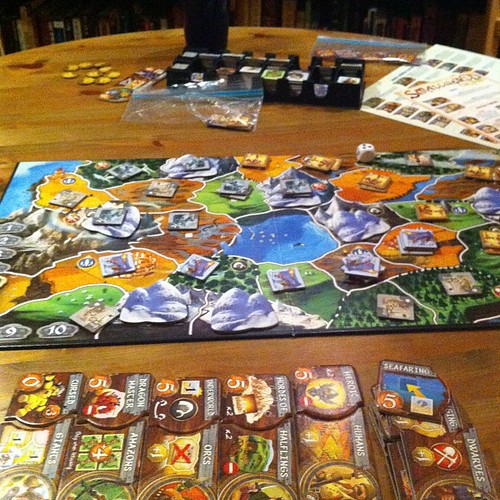 After that I freaked out because I lost my phone, found it, came home & hung out with Jenny & Olivia for a bit. When Nino came to pick her up, me & Jenny broke out Small World & got

ranai to come out & play it with us. It was a pretty brutal game, actually. I won but only by the skin of my teeth. Jenny turned my tactics against me! I tend to play a very "let's you & him fight" game-- I try to take unoccupied territory & present a small threat profile, & I am not shy about pointing out that attacking someone else might be a better strategy than attacking me. It works because it is usually true; like I said, I try to maneuver so that it is smarter to attack someone else. This game that didn't work! Danielle's "commando skeletons" had a huge open, conquering vast swaths of land, rivaled only by Jenny's "merchant kobolds," with my "diplomatic ghouls" skulking in one corner of the map. Three really strong opening races; I put my ghouls into decline immediately, which is the right way to play them nine times out of ten, & came out with "ransacking wizards." The two-pronged approach was great, but the skeletons owned most of the map still, & the kobolds were netting double the points they normally would, since they were merchants. We fought tooth & nail, with Jenny's "underworld orcs" making a mid-game appearance to raid all the sites of magic my wizards occupied. Danielle had "dragonmaster amazons" come in at a fairly late turn, which really messed everything up; those guys were scary. I ended the game with "cursed giants," getting all the coins that had been placed on them to skip them, & one by...two points. Phew. It was really rough!
Collapse