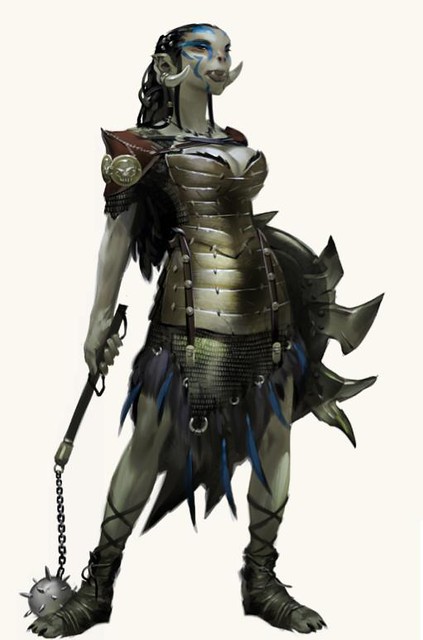 I have an argument in favor of orcs called "Ecce Orcus" at Tor.com, which has been something of a pet project of mine for a little bit. This particular post stems directly out of my review of Pathfinder's Advanced Race Guide, as I was unsatisfied with the same old "orcs have intelligence penalties & no good racial powers" mechanics that Dungeons & Dragons Third Edition had. In a lot of ways it stems ultimately from what I talked about in my non-satirical "Modest Proposal" post, which is to say it is about struggling out from under the blanket assumptions of the genre, not to subvert the genre but to elevated it out of the sexist, racist past. The core of the "hack & slash" game is...breaking into people's houses, murdering them & their family, & then looting their stuff. Or you know, colonialism. In my Oubliette campaign setting, the world near & dear to my brittle black heart, I don't have "orcs" per se, any more than I have "elves," but I am obviously very aware of those conventions. My "elves" can be seen in the Alphas, which are sometimes called Alephs, with the linguistic drift to "Aelf" & beyond obviously implied. My "orcs" are the Karnaks, or the Arks, & thus obviously "Orc." You'll also note my use of capital letters; I don't have fantasy races, I have fantasy species. Also, to lift the curtain a little further-- it is hardly a secret-- but Karnaks are Neanderthals. Or at least, a fantastic representation of Neanderthals based on the data available to me as an armchair anthropologist.
Collapse