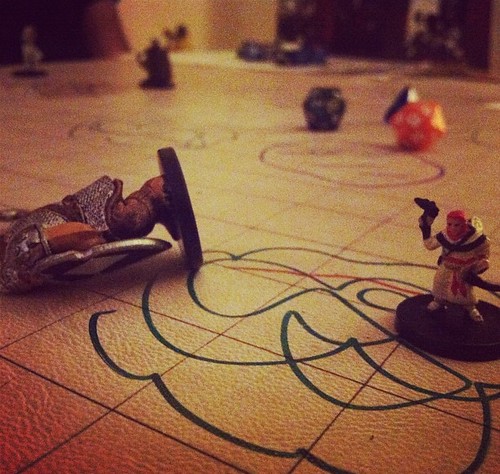 I playtested DnD Next some more with my newbie gamer friends from Television Night. Round two for

fordmadoxfraud, though you can hardly call him a neophyte. Cordova the halfling thief, Isabelle the elf wizard, Flärn the dwarf soldier & Sir Uther Pinbock the dwarf knight, respectively. Their last session had ended with the ogre bursting out of the entrance to his lair while orcs rained arrows down on them from a row of murder holes that are normally concealed by...severed heads. Alright, then! Because it was a stressful situation & because I wasn't sure what spells everyone had cast or what damage they'd taken, I reset the story. I said they'd made a fighting retreat a night's march away, bunking in this huge city block sized foundation, a ruin in the weird woods. Flärn used his stonecunning to determine that the place had been some kind of halfling hotel, a fancy casino & dance hall, before the encroaching end of civilization spelt its doom. They fiddled around there for a while, failing to light a bonfire as a distraction; they hoped to draw some of the defenders of the Caves of Chaos away to investigate it, or throw anyone following off their tracts, but no one could roll better than a 6 to light that fire! Eventually they just gave up & left...only to be ambushed by a pair of bugbears! A spiked log trap, & then javelins thrown from their hiding place in the swampy pools of water. I like to make bugbears all crazy serial killers; you know, hobgoblins are just militarized goblins, right? Bugbears are just Jason Voorhees-ized goblins. Their sneak attacks were really potent, dealing more than ten damage to the thief & the wizard, but the fighter & the cleric were fine. Danielle's rogue got the killing blow on one bugbear, smashing its skull in with sling stones-- you could see spinal fluid!-- but the other one got away, & when they turned around even the "dead" bugbear was missing! Huh? What the?! Eventually they did make it back to the Caves of Chaos, smashing out some of the fake heads in the orc's arrow slits...& Lilly, sticking her elf wizard's head in to look around, saw seven orcs turn the corner...& that is where we stopped. (Photo by Danielle.)
Collapse