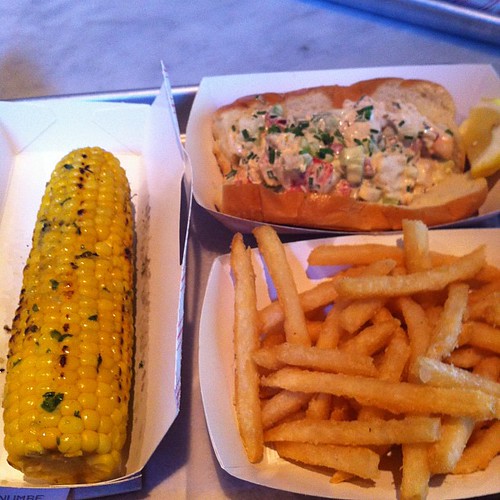 On Friday Terra & I finally found that lobster shack we'd been looking for, & the pay-off was definitely worth wandering around in the brutal summer heat, because that place is weird. The front is walled off with canvas painted to look like the beach, the floors are wooden boardwalks, it cuts through to one of those strange commercial alleys...& there is a small theater with stadium seats done up like a cruise ship. It was playing Dirty Dancing & at the top of the shell of seats was...a weird bedroom area? Good corn on the cob, & I'll probably go there again just to prove to people that such a crazy place exists. After that, I came home & went to the gym forever-- I did some incredible length of time sans any extra cardio, which means I really went all out. Saturday, same sort of thing. Advanced Dungeons & Dragons was canceled. We babysat Olivia & did some laundry. I went to the gym & had another decent slog-- more like the regular routine, though-- & had brunch with Jenny. We had a couple of new beers-- Sixpoints Smoke Signal & Coney Island Albino Python-- before we finally got ourselves in order to go see Much Ado About Nothing. & then yes, Sunday, much more of the same! A lazy morning, then to the gym; this time, my legs were exhausted from Friday & Saturday, so I cut out one of my sets on the elliptical but still went for an hour & ten minutes. Then more brunch with Jenny, this time at Casa Ventura, which is in a building that has been turning over a lot, lately. I had shrimp & mofongo, which was good, but the mojito was amazing. I gnawed on that sugar cane, you betcha. From there it was an errand to get fancy beer & ice cream, then home & the reality show The Glass House, which is weirdly like a Frankenstein's Monster of weird reality clichés. Then back over to Kira & Nino's for dinner-- Kira made steak tartare & lamb burgers-- to round out the weekend.
Collapse