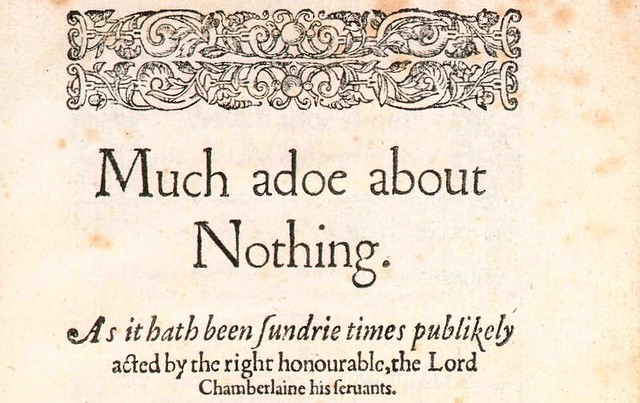 Last night Jenny & I went to go see Much Ado About Nothing at Island Shakespeare on Roosevelt Island with Terra & Scott. I have very fond feelings for Much Ado About Nothing-- though Twelfth Night is my favorite of Shakespeare's comedies-- despite the fact that I hadn't seen a production of it ever & I hadn't seen the Branagh film in years. Jenny & managed to watch the first half of the movie before we left, because we weren't sure just how weird the performance was going to be. Thomas Kee, the director, has a pedigree by way of Sleep No More, & he brings a sense of movement & space to the performance, but it isn't deconstructed so much as decentralized. It isn't an abstract retelling, but rather a straight forward telling in an embellished context. The play takes place outdoors, in the Roosevelt Island Amphitheater-- right behind where Jenny used to work-- & the action moves from the floor to stairs, to the upper deck & beyond, back down, into the seats, & so forth. The setting is Messina-- when the actors are not part of the tide of action, they linger elsewhere in the amphitheater. The division of performance is simple; the actors speak Italian, unless they are actually performing the play, in which case the bard's own English comes out. Otherwise, the cast is left to run riot.

Which is really where the play shines; in farce. The performance capitalizes on that; Ashley Strand's Borat-like Dogberry is really a heck of a piece of clowning, & Ursula had a wonderful streak of Joan Cusack in her overblown scheming. The other bits of comedic relief-- your Oatcakes & Seacoals-- kidnapped a small tribe of children, took them off in the margins beyond the theater, & set them to drills & marching. Pretty adorable, but it went to a whole 'nother level when Borachio & Conrad are taken into custody-- while the drama of faked deaths & mistaken virtue unfolded on the main stage & upper deck, the kids were playing a massive game of hide & seek with Borachio & Conrad, as they sought to escape the watch. Just a super fun little side element, & not the only one, away from the focus of the narrative was singing, musical instruments, flirting, scolding, & all manner of hurly burly. As for our Benedick, David Baynes reminded me of...a white Aasif Mandvi. The same sort of wry wrist to his mouth. Kristi Artinian, the Artistic Director for Island Shakespeare, was Beatrice & she reminded me of Melissa Joan Hart-- or less Melissa Joan Hart & more Clarissa Darling from Clarissa Explains it All. Michael Moreno's Don Pedro is played much less flirtatiously with Beatrice & much more sincerely, which brings out a dimension of conflict largely absent in the Branagh film.

I think these sorts of interactive Shakespearian events really get to the heart of something. You hear about minimalist performances using a stagehand as the tree separating Romeo & Juliet; why not cut out the middleman & just use an audience member? Island Shakespeare uses the whole space, dragging the viewer along with them while providing embroidery at the edges to catch the eye. A long while ago I went to a Gorilla Shakespeare Twelfth Night that worked much the same, set in the middle of Fort Tryon Park, where the audience sat in a square & the scenes taking place on one of the four sides. Jenny told me about a performance in Washington Square Park, back when it still had those skateboard hills, where A Midsummer Night's Dream had the scenes shift by running from mound to mound. These sorts of creative uses of space seem much more vibrant & in the spirit of things to me. It is a comedy; don't just sit there amused, get up & run around & laugh! I think it also provides a nice chance for actors to get recognition from people who find their style of humor engaging; as I mentioned, Ursula's "angle we for Beatrice" delivery cracked me up, though it wasn't until she'd had a few more lines that other people started finding it as funny as I did. Having the open space, I was able to be right there & the audience/actor walls were particularly thin. Great stuff. I can't wait to go see what they do next.
Collapse