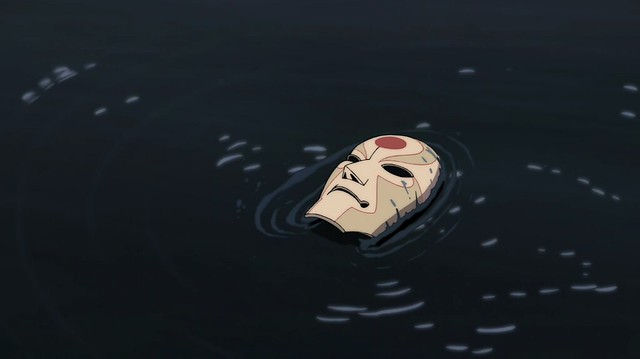 The first part of my two-part review of the Legend of Korra season finale on Tor.com is up, & it mostly involves me eating crow, both on my pet theories & on some facts. Without being too spoilery: Zach Tyler Eisen is not one of the voice actors in that episode, don't believe my lies. That laughter sure sounds like him, though. & if you were following anybody's brainstorming or taking bets on guesses, you'd be getting a nice payout if you went with

kingtycoon's notions, but if you put your money on ancient spirits, well, I feel bad for you, son. Just goes to show you; hokey religions & ancient weapons are no match for a good blaster at your side. Anyhow, that is what the Television Night crew watched last night. Same folks as Cards Against Humanity at Commonwealth last night; me, Jenny,

fatbutts & James. We goofed around, someone was always eating, & then finally by nine we were ready to sit down & knock out the hour long finale of Korra's Book of Air. After everyone shuffled their bones home, Jenny & I stayed up a little bit to watch an episode of Storage Wars; she had some work, & I had some cuddling to do. Oh, & unrelatedly; the other day I fiddled around with the html of my theme & finally got my "mordicaifeed" tumblr to look somewhat acceptable. It isn't the best substitute for a working Google Reader, but it is better than nothin'.
Collapse