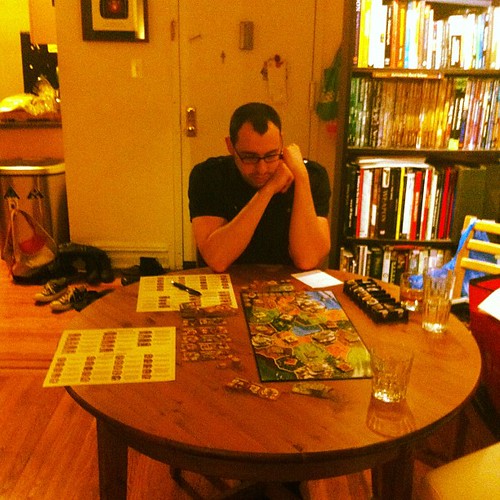 I know I over-use the Kelvin filter, but it is the easiest way to colour correct a flashless picture! I'm not a skilled photographer; I'm pretty sure we've covered that before. Anyhow on Monday I had lunch at Big Daddy's with Brian, Jocelyn & Matt & found out that Matt doesn't like tater tots, which is frankly heresy as far as I'm concerned. After work, Terra came over & we played Small World. I thought my berserk giants would make a good showing but her pillaging amazons made short work of them; maybe my forest orcs would do better? Nope, her underworld elves beat the pants off them, too. I played the merchant trolls hoping they could expand into the space the amazons had occupied, but Terra's wealthy sorcerers just used their spells to convert them, ignoring their troll lairs. I lost fair & square by a pretty wide margin.

I didn't want to go out last night, but I did & I had a nice time. Yesterday I came home & right away went to the gym. I had a nice work out; saw Tony & played along in my head with Jeopardy on the elliptical machine. I came home under the mistaken impression that tonight was going to be me & Jenny having a date night, only to find out that Jenny was hanging out at a bar with

fordmadoxfraud & James. I was having a pretty misanthropic day-- "diaf" as the kids say, or if you prefer, you can see my mood perfectly exemplified in this "gpoy"-- so I was grouchy about it. I thought we were going to watch Much Ado About Nothing before we went to see the Sleep No More-esque rendition of it on Friday; I was just in the wrong mood, but I went to Commonwealth, got a beer & some shepherd's pie, & shook it off. I think! We played Cards Against Humanity, which David won, but I think I might have gotten second place? Then we came home & went to bed.
Collapse