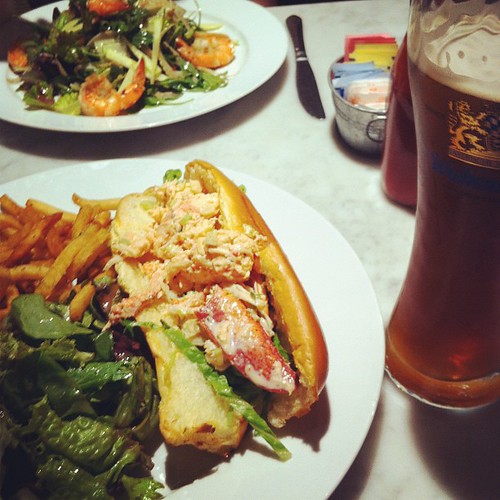 First off, Friday. Thanks to the miracle invention of Summer Fridays, I get to leave early; I also borrowed the intern this week so I left the office with a clean sweep. A metaphorical sweep, I mean; I didn't make her clean or anything, but I actually got her to do a couple of big projects that needed to be done, but were big enough & low priority enough that they were at the bottom of the list. She got to learn a thing or two & I got a couple of swords of Damocles out from overhead. Terra had been sick on Wednesday so we decided to take it relatively easy. There is supposed to be a new lobster shack around where we work, but we can't seem to find it-- the first time we went looking for it we got lost in Earth-2, where they have agribanks (a combination grocery store & bank) & all the cars are very military influenced (like the jeep or the hummer, but magnified) & there is a huge mysterious bronze skyscraper-- & this time was no different, though I did preface our search with the fact that I still wasn't sure where it is. All I have is rumors & hearsay! Failing that, we thought maybe Eataly? But that place was a madhouse, so we ended up at Sagaponack, so I could at least get a lobster roll. Then we headed over to meet up with Brian & Matt & got caught in a thunderstorm along the way. It was pretty wet, I will confess! We made it to Crocodile Lounge but alas, we had already eaten lunch! The gimmick there is free pizza with every beer, but I was all lobstered up with no room left. & then after that? Terra & I went to go see The Avengers! We were going to watch Snow White & the Huntsman, but then I found out Terra hadn't seen The Avengers yet, & it is totally worth re-watching, on my side; more than watching a mediocre movie, for sure. After that, home for me & tangle legs on the couch with Jenny. We watched Bunheads; still too much like Gilmore Girls but also, not Gilmore Girls. 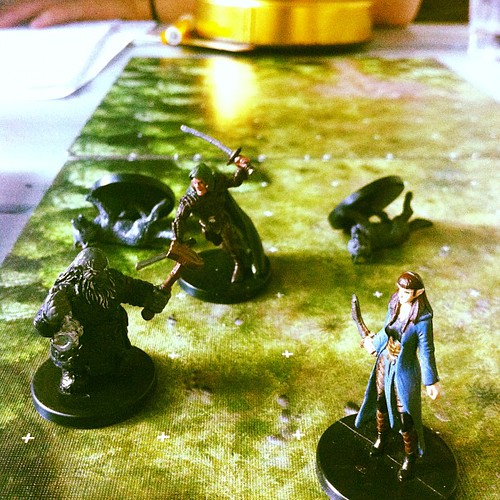 I got to reprise the roll of Encre Panache. I just really like that closing line of Cyrano de Bergerac, "my white plume!" & especially so because that literal connotation is meaningful in French. I like idioms & puns in other languages, like Japanese haikus that play with slightly modified kanji. Anyhow, Encre-- or Ink Feather, or Blackquill-- is a gnome wild mage, but not a chaotician. He's a metamagician, he's interested in the abstract theory, in the fringes of thaumaturgical research. Plus, I get to break out my Peter Lorre impression, which is one of the few impressions I can actually do. I've got a "Transylvanian" one, too, & a "Goblin" one, but then I'm pretty much tapped out. It was

fordmadoxfraud's Advanced Dungeons & Dragons game, which is hosted in the backyard of Bar Reis. I'd played there with David &

fatbutts before, when I was a 4e spellpunk gunslinger warlock, but outside is a better venue, on account of better lighting. The other players were James & two people I hadn't ever met, Emma & Alicia; they played an elf ranger named Oney, a halfling psion & a human thief, respectively. We were in the port of Daggerfalls, which it turns out, we hate: they levy taxes that are pretty unreasonable, & then put you into indentured servitude until you pay it off, which is a reasonable setting, in that history is full of crummy oppression, but we were not fans of it. Trying to pay off out debt we took a job trying to get back a noble's kidnapped sister-- suspecting that she hadn't been kidnapped, but rather run off-- & ended up on the road. Avoided a manticore, the thief met some elves-- who laughed silently, like aliens, & freaked everyone out-- & killed some possibly rabid wolves. Colour spray is such a great first level spell; if I get to keep leveling Encre, I might go with a sort of "prismatic theme." 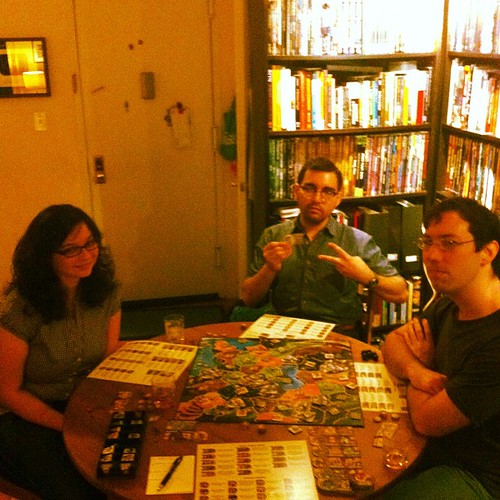 After we played Advanced Dungeons & Dragons, we came back to my apartment to play some Small World. "We" being me,

fordmadoxfraud, James & Alicia. I poured everyone some rye & we got to grinding. I started with "seafaring amazons," who cut the world in half, ocean to ocean by way of the central sea. When I retired them I came back as the "commando elves," which were a perfect race, as by then everyone was attacking me, & elves don't die, they just always retreat. Alicia started with the "merchant humans," which was a great first pick, & then followed them up with "dragonmaster ghouls," which is a wonky combination-- both are good on their own, but their powers aren't very compatible-- & then she ended with "bivouacking orcs." James started with the scourge of the world, the "underworld ratmen," who poured out of every cave on the map, & then he followed that up with another aggressive play as the "berserk trolls" came on the map, & he ended the game with some barrow wights, the "hill skeletons." David was the "pillaging giants" to start, then switched tactics to the "diplomatic dwarves"-- he played diplomatic really well, but dwarves are better first races then middle, I think-- & finished with a plague of "forest halflings." I won, but I mean, I had played before & no one else had so I'm not bragging about it.

ranai came home shortly thereafter & we all watched the "Advanced Dungeons & Dragons" episode of Community. There was a bunch of drunken Mario Kart-- I also broke out the leftover slivovitz from the Yiddish Policeman's Union meeting-- & drunken Super Mario Brothers Three, too. Then at last, bed; Jenny was on a business trip & wasn't coming back till like one in the morning, so that was sad, but she's here now, so okay!
Collapse