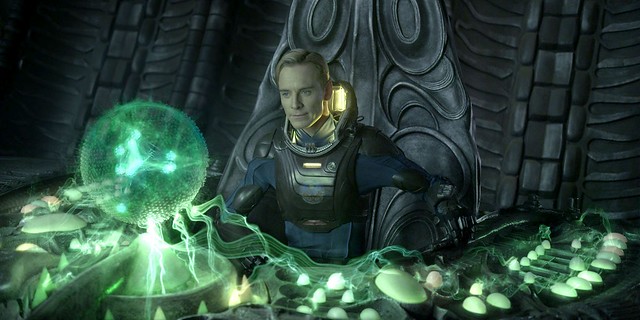 Prometheus is not really a movie you have to avoid spoilers for, despite people acting like it is. There isn't a twist, there isn't a mystery; what you see is what you get. Some proto-human aliens seeded the Earth with life. That is the premise. Then there is a spaceship & some body horror à la Alien. The movie isn't very complex. You may have heard it was "confusing." This is not because the film has a loose impressionist approach to storytelling, like 2001: A Space Odyssey, or that it has some rich but dense cosmology, but rather because it has enormous plot holes & in general doesn't make a lot of sense. Prometheus is two-thirds of a good movie yoked with a third of a terrible movie. Luckily, it is gorgeous to look at & has Charlize Theron's "Vickers" & Michael Fassbender's "David." Everyone else-- sorry Noomi Rapace's "Shaw," you are too boring, you too-- can die in a fire for all I care. Hey, some of them even do! Right off the bat, that is my first problem; I don't mind your rubbish philosophy about panspermia, that I can suspend my disbelief for, but the people you'd choose to send on your trillion dollar mission? Being total rubes? I don't buy that. A bodybuilder drinking hemlock & drowning in primordial goop is one thing, a bunch of cowardly & useless crew members is another. Seriously, astronauts get psych screenings when they go into space for a week to fix a cable satellite; you're telling me these asocial schlubs are the best you you could find to go make a possible first contact? Even corporate hiring practices aren't that bad. The geologist literally just presses a button; anyone could have done that. The biologist thinks he can snakecharm alien lifeforms? Both of them are cowards who voluntarily separate themselves from the group? So dumb. The head archeologist is such a bro, with his keffiyeh & his casual slurs against synthetics; oh cool, the hipster racist, I'll totally be able to pretend I'm sad when he dies!

Luckily, the android David is on the scene. David is wonderful. "Oh mystery button, I push it." "Look, I think this is writing, I'll try to do what it says!" "Secret door? Better open it! Mysterious pods? Better open in! Creepy slime? Better touch it!" David's curiosity drives the film; he's really pretty delightful. If I was Vickers-- who is also solid, who is basically half Burke & half Ripley-- had any sense, she would have immediately put three-fourths of the crew back into cryosleep. They were just so useless. The plot doesn't really make any sense-- despite having holographic "flashbacks" you don't get a cogent backstory-- & the monsters seem...scattershot. So alien mealworms plus goo make eels? Sometimes Promethean heads explode? Here is the thing-- this movie suffers extraordinarily from not being a proper Alien franchise & not having H.R. Giger in their pocket. Sorry, snakes & vaginas & octopodes aren't actually creepy any more. They are just easy. A hand with a tail that is trying to inseminate your face is crazy & awful & alien; tentacles are a little on the nose, you know? Boring. For me though the scene that really wrecked the whole movie was the bit with the goofy automated surgery bed. It is established that this autodoc is supposed to be incredible; in a world where people are travelling to other solar systems & building perfect synthetic humaoids (a world somehow only eighty years from now) the automated surgeon is worthy of comment; there were only a dozen made! Of course...it is only "calibrated" for men. Because that makes sense. & it doesn't give you general anesthesia, just topical. Because that makes sense. & its "quartine" protocols are slow & leisurely. Because that makes sense. Noomi Rapace's character has a gory cesarian-- because heaven forfend they use the word "abortion" on screen-- that is just cartoonish & silly, rather than body horror. 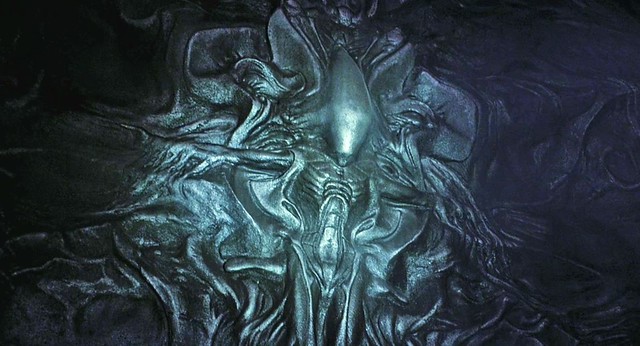 So yesterday I went to go see Prometheus with Terra. I realize I didn't give my interpretation of things. I should note that my ideas are based on what I think should be the revelations about the plot more than they are based on what we see; it is my idea on how things ought to be. I think the Engineers, the Prometheans, are Giger People, & that the xenomorphs are phase two of their terraforming. They live in a world of black ridges & strange hypersexualized organic technology, & in order to make worlds their own they first leave a sacrificial victim to see a world with the organic building blocks, & then seed it with xenomorph eggs or black goo-- I think it was a major mistake to add the black oil as a unnecessary level of complexity-- to reorganize the organic life into their organic technology. I also neglected to mention that for both Terra & me the line "it's what I choose to believe" is a hallmark of a worldview we find fairly repugnant. Anyhow, we split ways after that-- well, we ate some dumplings & dolsot bibimbop-- & I went down the the Lower East Side to meet up with folks for Brian's birthday. It was a fairly big gathering at Ward Six, which is not a venue I found very welcoming; it went from being a decent backyard with a surly bartender to being a, you know, bar on the Lower East Side on a weekend, & the manager bounced us from our tables because there was a reservation. It was fine, actually, since I was ready to go; we headed back to Kat's apartment to hang out, which was more my speed anyhow. A full crew plus folks I hadn't seen in a long time, & eventually Jenny even showed up. We stayed out later than I meant to, but cuddled on the train ride home. Now today I watched The Legend of Korra & we've been babysitting Olivia. I have hopes to go to the gym & finish the book for Eleven-Books Club but I don't know how effective I will be at those tasks. Fingers crossed I guess!
Collapse