"He is what Superman looks like after spending several millennia meditating inside the sun. As a 'pure' & refined Superman, his insignia is designed to look like a heart shape, & the 'S' is formed by two seperated 'yin/yang' shapes which are intended to be the quotation marks inside which he & his whole fictional universe is framed as a story." - Grant Morrison. 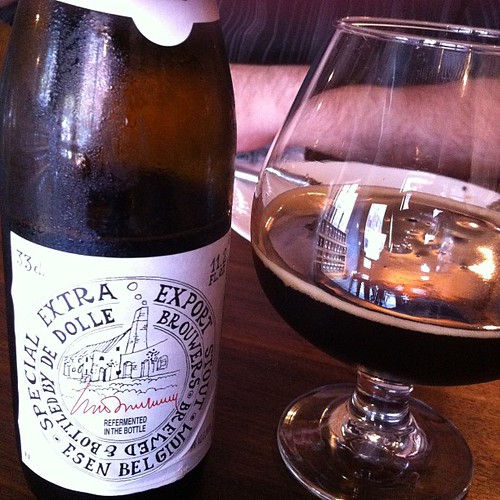 Sunday I woke up bright & early & went to the gym. The elliptical machines with working televisions & that had solitaire on them-- I like both-- were all occupied, so I just had a very free weight intensive workout. Then, to make up for it, Jenny & I went to Beer Table with

ranai! Oh man, yum. I started with the Evil Twin DEVFFC MQAL9,.8 "Melvin Brew" which was very bitter & citrus & I thought it had a nice apparent alcohol but apparently no one else does. I like a punch in the nose, though, so that is a plus for me. First course was a treviso salad with duck lardons, chickpeas, Shepsog & pickled cherries. Very nice, & what Jenny wanted-- she got the fennel salad & we shared-- I hadn't understood a conversation she'd had with me about it. I confused "treviso" with "chorizo" & ordered the chorizo sandwich with fried egg, jalapeños on a brioche bun, as well. A happy accident, as that was...really, really good. I washed it down with Der Dolle Special Extra Export Stout, which was like chocolate & cherries, but not too sweet; I liked it. Ryan got a t'Smisje Calva Reserva on my suggestion & was happily confused by it. We had a tricky time with the credit card split-- it turned out not to be us being stupid, either!-- & then we came home to play a game of Small World. It continues to be both a lot of fun & create power & race combinations that stretch the imagination. & when it stops...I'll get an expansion pack! We started this game with Danielle's wealthy ghouls in the north, a nice combination-- get your gold, go into decline, no loss at all. Jenny's alchemist sorcerers cut the continent in half; their scary conversion power in full effect, unlike last game when Jenny stomped Danielle's out right away. My merchant amazons came in to the south; I expanded & had a nice few turns. Ryan's swamp elves held down three swamps, but when Danielle's flying skeletons (!!) started attacking everywhere, that was the last straw & he went into decline, starting anew with fortified trolls. Alchemist & merchant made Jenny & I hold onto our races perhaps overlong, but she came in with berserk humans & I followed with pillaging orcs. Danielle had a spin with dragon master dwarves, rooting out the trolls from their castles. A real Dark Age, at last ended by Ryan's commando tritons. I won the game but it was a tight race. We babysat Olivia for a bit so Kira & Nino could cook dinner & then popped over there for scallops & salad. I was too tired to bother trying to care about True Blood again-- let me know if there is a good Russel or Jessica episode-- so I just came home & crashed.
Collapse