I watched Underworld: Awakening with Jenny last night; she totally zoned out & gave up on it almost immediately, but I was entertained. Not so much because it was good-- it really wasn't-- but because there were good ideas floating around in the soup of it. It is a trope of science-fiction fans to nod your head sagely & say that the only thing that could bring world peace is aliens, so the humans could have something external to fight against. Putting aside the implausibility of that-- humans would still kill each other, humans are so stupid-- putting that same logic into the horror genre is an interesting wrinkle. The human antagonism gives you an excuse to have your vampires murder people & drink their blood. I mean, generally protagonists shy away from that, blood drinking nocturnal marauders included, but actually having Selene fang out is nice; Underworld has always struggled with having vampires that were just superheroes. Same thing with having the werewolves be behind the evil conspiracy; that was a legitimate use of the "human cure" red herring, & having the "cure" everyone was talking about be a cure for silver allergies is quite clever. I guess those are spoilers, but I don't expect that anyone has a burning passion for this movie but hasn't seen it yet. Also, having a giant hulking werewolf is great, & I like adding the gorilla gait to it. The two biggest problems with this movie are...well, the cast & the script, which are...two big problems. Kate Beckinsale is good-- I like her as the stoic action star in these films, & she perches well-- & the little girl playing Subject Two is alright, but everyone else is entirely flat. Tywin Lannister from Game of Thrones is in it but even he can't chew on this script enough to make it palatable. He even gets to be creepy with a little girl the way he does with Arya, but even that can't quite click. The cop seems like he almost could be a good character...but he's really squandered. Everything is squandered by the script, really; there is the skeleton of a story here, but the rest of it is all just sloppy. Whoever outlined it-- Len Wiseman & J. Michael Straczynski I'm guessing?-- did a decent enough job, but the execution doesn't come close to living up to it. I would watch a science-fiction "vampires in space" sequel though. 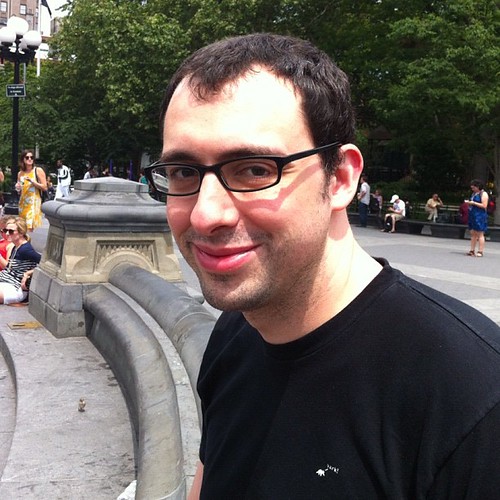 But that's not all! I've been so friggin' social it isn't even funny. Or is it? Maybe I'm laughing maniacally while I type this, maybe I'm muah-ha-ha-ing while tickling these keys like a mad scientist playing a colossal church organ! On Friday I met

aslant for the first time, after knowing her online for a decade. Remember a decade ago, when you'd meet someone you knew online & people would freak out about it? "How do you know they aren't a gasp serial killer?" Anyhow, we got lunch at Boqueria-- I had a sandwich with sardines, apples & goat cheese that was good, but I could only eat half of it. There were...a lot of sardines, & while I like sardines they are...potent. Then we walked down to Washington Square Park & sat at the fountain, where she took the above photo of me. Then from there it was to hang out with Kat, Brian, Matt & Jocelyn. I brought a couple of bottles of sake & we burned the roof down. If I thought I was sleepy on Thursday after martinis, I was wrong, because when I got home I was so tired that I fell asleep on the couch watching Punk'd. Gosh that show has been a mess this season, huh? It was fun when Rob Dyrdek figured it out-- he's a polymath!-- but it was pretty out of control by the end. Saturday we babysat Olivia-- her new game is elbow licking-- then I went to the gym & then went to Bridget's birthday party at the Sea Witch. The party consisted of arguing about movies & comic books, as you might expect. Jenny & I had a couple of drinks but left to go see the Brooklyn Pride Parade. We had to run to catch up to the front of it, since seeing the Pride cheerleaders is the highlight of the parade. Then home to watch Underworld: Awakening. Going to bed, Jenny had the hiccups & I scared her to get rid of them-- which worked but made her pretty mad at me. Sorry to startle you! I made up for it this morning by introducing her to the concept of vlookups.
Collapse