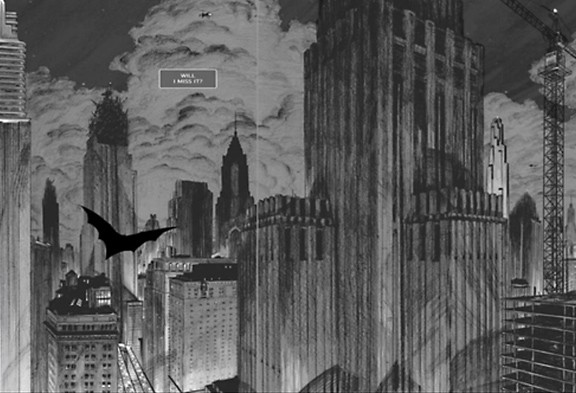 Feeding a punch card
into the Bat-Computer:
"SMILEX GAS CONFIRMED."

Any entire Batman comic inspired by Hugh Ferriss? Why, yes, I don't mind if I do. I was just talking about Batman's relationship to the architecture of Gotham City when I read Batman: The Court of Owls. I read Ferriss' The Metropolis of Tomorrow last year, but I had used his work to illustrate sessions of my second Oubliette campaign, & I put him on the cover of one of my NaNoWriMo novels, so I've been a fan for some time now. Chip Kidd I mostly know Chip Kidd as a cover designer & because of Mythology: The DC Comics Art of Alex Ross, which sure is pretty. This goes up there with "pretty books," but I like the narrative weaving through it, though in all honesty it serves more as an excuse to get from one gorgeous scene to the next breath-taking vignette. I've never been aware of Dave Taylor before, but I sure am going to start paying attention to him now.

I had a disagreement with a friend about the lack of flap copy on the book; I think the lack of foreknowledge works to its advantage, that being able to sleuth out the genre & tone of the store through little clues-- Batman has a Flash Gordon sci-fi grappling gun; that combined with the art deco architecture gives a certain vibe-- is rewarding to the reader. She rightly responded that she wasn't sure if this was a comic or an art collection or a series of meditations on the covers or what. A fair point, but I'm also in a soup of context; I'd heard enough buzz & seen enough previews to have an idea. The marketing took care of it, to some degree; even without that, even if you pick it up ten years from now, I think you'll be able to figure it out. Besides, you wouldn't think it was anything beside a graphic novel unless you knew who Chip Kidd was, & if you knew who Chip Kidd was you probably know what Death by Design is, too.

The story is very old fashioned-- delightfully so-- in a way that meshes with the ambiance of the story. The pulp science fiction angle is played up & paired with archaic technology in a nice piece of juxtaposition; holograms & vacuum tubes, giant clocks & stasis fields. Even the Joker is much more of a crook than his modern incarnation-- today's Joker is a serial killer, an unchecked murderer, but Kidd goes back to a Joker who was still very much interested in robbing you. The skillful anachronism weaves into the story, turning the real world outrage of the demolition of Penn Station into a tale of environmentally progressive architecture. Bruce Wayne borrows a page from How I Met Your Mother of all places & falls into an orbit of romantic antagonism with the woman protesting the destruction of historic architecture, while he races against another vigilante to get to the bottom of the mysterious accidents befalling the renovations. & you know, periodically punching the Joker. 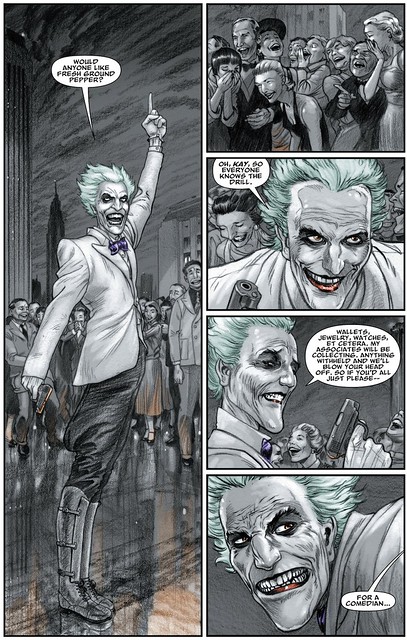 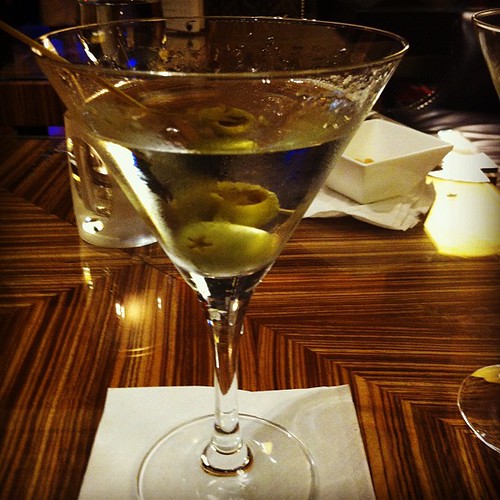 I was really only at Book Exposition America for a day; I popped over there otherwise but just to sort of act as a mule, a grunt, shuttling stuff here & there. On Thursday I manned the booth, putting on my bright shiny smile for the whole bookworld to see. I hear a lot of complaining about BEA, so I figure I might as well throw in my two cents. Yes, the Javitz Center is a nightmare, & the fact that it is surrounded by blocks of construction on all sides make it even worse. Everyone who adds to the mythology of the terrible Javitz is probably spot on; I left the first New York Comic Con without getting in, if you recall, which is a testament to how bad it is-- you might just turn around & leave. That said, at least inside the construction seems to have come to a close? As long as you stay on the main floor, it isn't so bad, but woe betide those who have to go downstairs. Is BEA worth it? I think it is totally worth it. I run into people I only see once a year, or people I should see more often but haven't been able to synch up with. I shilled galleys to bloggers & buyers, I ran some film people through our fall list to they could figure out which they might want to option, & in general I think I was of value to the company over-all. It makes sense to have everybody in one place once a year to get facetime, build relationships, network, go to parties & in general just...be in the same room.

After BEA ended, though; that is when the living really starts. Before wandering around the floor with

onatopofthings, I had seen Pierce & Erik at the Paizo booth, but once it wrapped I met back up with Pierce, Paul & we headed over to The Algonquin to drink martinis. Civilized as heck. We were joined by Bob, who I'd met last time Pierce & I had grabbed cocktails; I mentioned this time that I coveted the Absolute All-Star Superman & he said he'd send it over, which officially makes that the best of my BEA swag, even counting the Pathfinder stuff Erik gave me & the book on tea that Pierce wrote. Well, okay, maybe Pierce's beats it, since it has the personal touch. There was a rather hilarious moment when a guy came over to our table & said to Paul-- "excuse me; I hate to interrupt your conversation...but this is the Algonquin & so I have to ask...are you John Updike?"-- which was especially lovely since Updike died in 2009. It isn't the craziest comparison, physically, but we thought it was pretty droll.

We left there & went a few doors down to the Lamb's Club for dinner. After a nice little amuse bouche, we got into the thick of things. We split some white asparagus, baby octopus, yellowfin tartare & my pick the beef cheek terrine for the appetizer; I think I won that round but when the main courses came it was polenta with egg & rock shrimp that Paul got that was really stunning. My scallops were good & Pierce's Delmonico steak was as well-- I didn't have any of Bob's halibut-- but that polenta was something special. We knocked it out with dessert; I had a dark chocolate torte that was lovely & a glass of grappa with Pierce that was probably a bit much...I left with a bit of a drunk on, out into...the bright light of day! How is it still daytime! Really though, it was fun to hang out with people who are on a first name basis with any author I might mention; see, that sort of opportunity is one of the reasons BEA is great. Then I went home & struggled to stay awake with Jenny &

ranai but after we watched an episode of Storage Wars I was just done for, & hit the hay.
Collapse