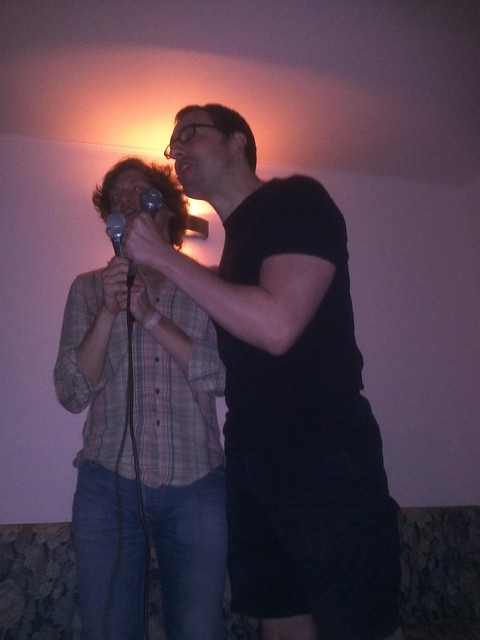 I know I talked about dinner & Karaoke with Phil & company. I also talked about playing Small World. We had another game, me & Jenny &

ranai; Danielle's "berserk sorcerers" were terrifying so my "pillaging ratmen" stayed on the other side of the world from them, but Jenny's "dragonmaster halflings" (!) don't play around; she wiped them out. As their nation declined, Danielle's "wealthy giants" seized the mountains & my "swamp amazons" wrecked bloody havoc on the lowlands. Jenny's "merchant ghouls" made a tidy profit & retired to their crypts as the world was wrecked by the sudden arrival of Danielle's "underworld wizards." Jenny closed out with "hill tritons"-- how very Innsmouth!-- & I had a last gasp with the "bivouacking dwarves" to win it. I forgot to talk about

fatbutts' graduation party on Thursday; it was a pretty social week for me! Not Sunday; other than playing games it was mostly just a coma, & the MTV Movie Awards. Today though I had a nice lunch & a couple of crazy chaos magick Jenga games with Terra, Imogen & Ryan.
Collapse