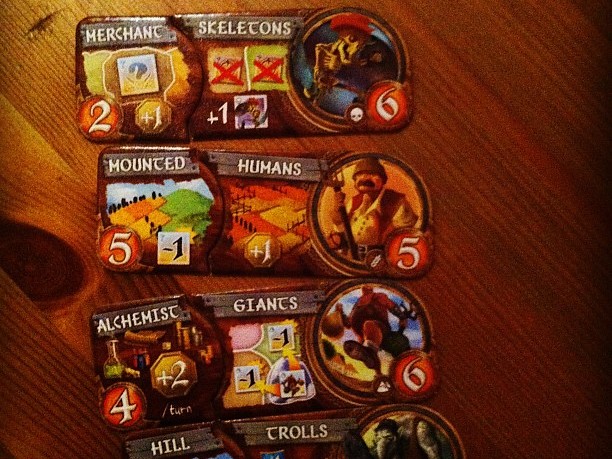 Yesterday was just crazily jam-packed with stuff; I'll just sort through it briefly in bite-sized chunks. Or you know, dwell in the height of brevity & wit, anyhow. So first thing I went to the gym; Jenny gave me the oomph & motivation to do that right out of the gate & I appreciate it; I had a two-fer with yesterday & so I felt pretty tough. Then we hopped on the F train & went to La Vara in Cobble Hill. It is the sister restaurant to Txikito, where we went right before Sleep No More; our friend Jason is the manager & really the whole point of going there was to see him. Well, & eat the heck out of brunch. Jason is our friend via Carla, & since she lives in Las Vegas now, we are out of the loop; I haven't seen Jason in a minute. Or like a year? So that was nice, to catch up with him; I don't mean to give the impression that the food was the reason for the trip...but I'm going to list everything we ate because dang. We started with a bloody mary & two gin drinks; the gin drinks were basically Basque interpretations of the gin & tonic & were really solid. I found out Jason has the same opinions about bloody maries as I do; I want like, a sip, a shot, but not a whole thing. After that the courses started coming; pimientos de gernika & moje came out first; pan seared peppers & a salad of endive & tuna. Those little seared peppers are like, the only way I like peppers. Then the tostada mar y muntaya which was...goat's milk butter, honey & caviar on toast. That was really solid. The main dishes were el quim, local squid & blood sausage with broken eggs & moragas, flash fried sardines with olive oil fried eggs & muscatel vinegar. We finished up with churros & dulce de leche & our goodbyes.

On the way back we stopped at The Brooklyn Strategist. It isn't really a game store for people like me-- no miniatures, which is mostly what I buy to subsidize my local hobby shops, since I get all my books through other means-- but I'm really cheered knowing there is a place for eleven-year-olds to play Dungeons & Dragons. We ran into

wolvus-- hi guys!-- & bought Small World. Back home we watched the Tabletop episode about it & then started setting it up; I reviewed that episode for Tor.com & it is completely responsible for my purchase.

ranai came home just in time to take it for a spin. The three of us had a rousing neck-&-neck game! There are two core premises to Small World. One is that you play as a race & power combination; "diplomatic" & "ratmen" or "bivouacking" and "elves"-- the selections are random & really evocative. The other is that your empire will eventually go into decline; when you lose your momentum, you get to play a new race & power combination. My "merchant skeletons" were dominating the southern half of the board, sharing the world with Danielle's "alchemist giants" & conflicting with Jenny's "mounted humans"-- until my skeleton's pushed the humans into decline & Jenny's "pillaging amazons" wiped them out. I let her amazons & Danielle's new "berserk tritons" fight it out; my new empire were the "hill trolls" & we came in to the east & just heavily fortified ourselves. After digging in-- trolls make "lairs" which add to their defense-- I pushed them into decline & came out with "heroic orcs," which is totally my jam. Jenny's "commando wizards" & Danielle's "spirit halflings" came in toward the end but I eked out the win; 123 to Jenny's 115 & Danielle's 117. It was the merchant skeletons that put me up & over; those guys were a powerhouse. 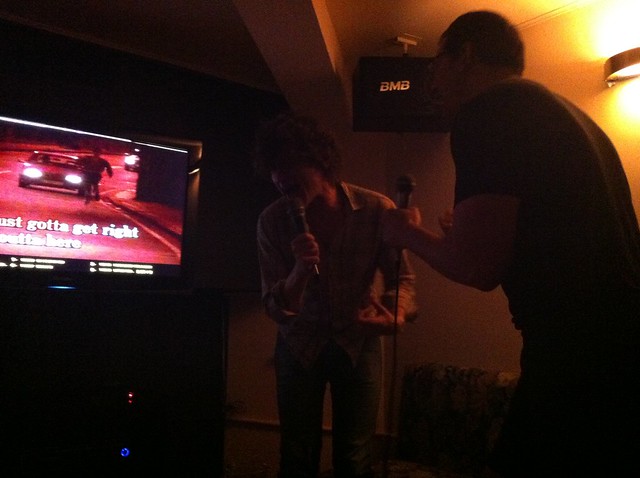 As soon as we finished player Small World it was time to leave to go to Phil's going away dinner. Aw, Phil! Jenny & I hopped on the train, grabbed a cab & got there ten minutes late, which is totally within an acceptable margin, I think. The dinner was at Edi & the Wolf, an Austrian joint with a sort of similar design aesthetic to Sleep No More. Candlesticks covered in wax, dried bunches of flowers, that kind of thing. Phil had set up the menu; we started with liptauer & herb gervais- farmer's cheese, one with paprika, one with pumpkin seed oil, then pickled vegetables-- baby carrots, ramps, beets, sauerkraut & greens, then pork belly with mustard & greens, & also a salad with baby squash, heirloom tomatoes, basil, mizuna, macadamia nuts with a soy & lemon vinaigrette oh & also flatbread with roasted garlic, mushrooms, raddicho, crème fraîche, mozarella & herbs. Jenny & I drank a bottle of red that was served chilled, but I forget what it was; the website's wine list doesn't have it which is a shame, because she really liked it. We sat next to Michele, who is always nice to see; I like her, I'd hang out with her more if I had the chance. Her dad is pretty famous; Phil works for him & so he was at the going away, too. There was also a couple near us-- Frank & Sarah-- who were our buddies through the dinner. We talked...a lot about Las Vegas strippers? That was sort of the topic of discussion, since Michele had just gotten back from a bachelorette party. Toward the end of the evening everyone wanted me to talk about...Silent Hill? Seriously a lot of talking about Silent Hill since it came up on Thursday! Ask Jenny, I wasn't even hijacking the conversation, everyone was making me talk about it! I sort of directed it to Megan & Liz, at the other end of the table.

Everyone left after dinner except a core crew. Phil just wrapped on the film he was working on for Michele's dad, & Meredith worked on it with him & she came, as did John who was one of the actors in it. So it was Phil, me & Jenny, Michele & her parents, Meredith & John who went to Sing Sing for karaoke. Listen; I don't really have the best singing voice in the world, so I'm not a fan of the "American" style of karaoke, but the private room "Japanese" style is okay. I don't want to embarrass myself in pubic, but I don't mind doing so in front of my friends! Also, all the sake & beer probably helped. Phil is pretty great at karaoke; he combines a good singing voice with a sense of theatricality that is a good fit. Michele is good too, & Meredith had a bit of a showtune vibe, so they all had it locked down. Wait, doesn't John sing a lot in that movie he was in? I saw them screen that, crap, I was like, the only terrible one! Anyhow, not a lot of the music I like was available; you know, no Mountain Goats or Jenny Lewis, let alone the Protomen! Jenny put on "Birdhouse In Your Soul" by They Might Be Giants & we dueted to that; Phil & I sang "Monkey Gone to Heaven," because that was the only Pixies song on the list, & I ended up screaming the "then god is seven!" lyric pretty loudly. Phil didn't actually know the song, so it was mostly me with him as antiphon. I kind of killed it on the Gorillaz "Clint Eastwood" though, until I flubbed a whole verse; still, that is a good song to keep in my back pocket. Phil & I sang a bunch of Queen; "Under Pressure" was pretty amazing if I do say so myself, even though I couldn't keep it straight which lines were Freddy's & Bowie's; "Bohemian Rhapsody" naturally followed. John & I sang some Ben Folds Five-- "The Battle of Who Could Care Less" has a Rockford Files line in it & everyone cracked up, which I only found out later was because Michele's dad produced it. Then, a cab ride home! & the creeping realization: I stayed out till four in the morning?
Collapse