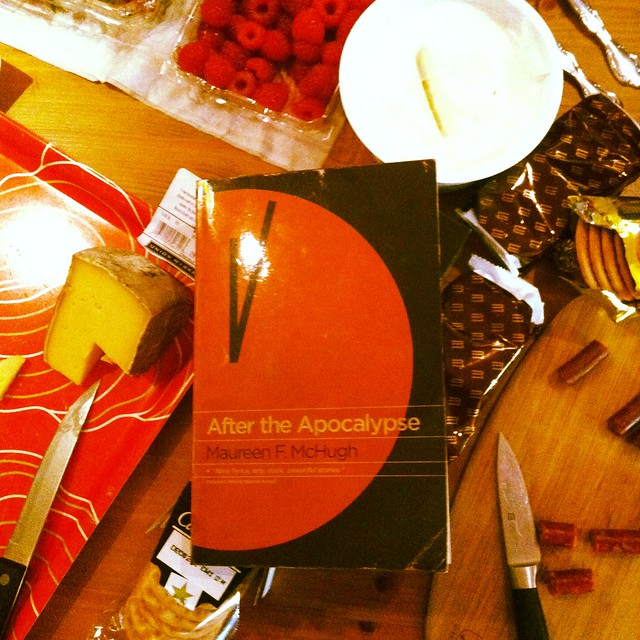 Last night was the Eleven-Books Club meeting for the book Amber picked, After the Apocalypse, but sadly she couldn't make it. The rest of us still burned this mother down, though! Earlier in the day Jenny & I had looked after Olivia & I'd hit the gym like a ton of bricks, so we were only barely ready in time for guests-- heck, Jenny hadn't even finished the last story!-- but it still came off a lovely evening. The two of us &

ranai were here first, obviously; Danielle made her massaged kale salad, & then

fordmadoxfraud pulled in with a grocery bag of fruits & cheeses. Carmen & Terra soon afterward, & then Sherene came in with a big open-- cute mouse wine & a fun temporary tattoo; more on that in a bit. Beatrice came in, somewhat unexpectedly, after negotiating a cab, & then last but not least was

littlewashu! So we got it cooking. Over all, it seems like everyone disliked it more than me, despite my lukewarm reception of it. I maintain that "Special Economics" was the best story & I think the consensus was with me, even though David wisely used the term "race tourism" in criticism of it; I also said that the eponymous "After the Apocalypse" was the worst & I don't think that was a controversial opinion either. I think "Special Economics" & "Useless Things" were the best received, & there was contention on whether or not the first story, "The Naturalist," was good or not. Still, another big of a fizzle, rather than a bang; looks like Kraken is still the winner of the unofficial "best book club book" award. Next up is The Yiddish Policeman's Union, picked by Kerry, & then after that is Beatrice's selection, Lost Memory of Skin. Eventually some people drifted away-- Terra had to catch a train & Carmen had other plan-- & things turned away from the book & into idle chit-chat. Talking about how David gave

kromelizard a Doctor Manhattan hydrogen atom tattoo drifted into plans for next book club & prison-style inking. We'll see if cooler heads prevail or if next meeting will be the most exciting one yet!

Mitochondria
floating in cytoplasm
& the Oankali.

So I guess I really like the aliens in the Lilith's Brood series, the Oankali. Not necessarily even these Oankali, these tall humanoid tentacle creatures, but rather the actual core concept behind the Oankali. See, the Oankali call themselves "Traders," as in, gene traders; they encounter new forms of life & "trade" with them-- meaning that the Oankali are creating a next generation of Oankali children with Human traits, but that they are also creating a next generation of Human children with Oankali traits...& that those two pools are the new Oankali. That is simplifying the relationships behind the intermingling, however, & those relationships are at the core of Adulthood Rites. Dawn dealt more with the mechanics of the aliens, of their three genders-- male, female & ooloi, the latter of which are the ones who do the act of genetic remixing, rather than having meiosis jumble the chromosomes up randomly-- & their biotechnology, as seen through Lilith's point of view. This one is mostly about her construct son, Akin, & his relationships with the Oankali, his extended family, the Humans who are resisting the Oankali's plan, & the Oankali who are remaining apart. See, when the Oankali "trade," one group settles on the planet-- the Dinso, on Earth-- one group stays with the mothership-- the Toaht-- & one group who departs without taking part of the trade-- the Akjai. That way they have a buffer against any self-destructive genetic or cultural traits. The driving force of the latter half of the book is Akin lobbying to have a Human Akjai, to let some Humans remain unaltered by the "trade," despite what the Oankali call the "Human Contradiction," which is that Humans are driven by both intelligence & a need for vertical hierarchies, which the Oankali believe dooms the species to suicidal self-extinction, such as the apocalyptic war that began the series. One thing: I really, really like how Octavia Butler capitalizes "Human," which is a convention I've always been for in fantasy & science-fiction; I think terms like "Neanderthal" & "Vulcan" have set a clear precedent for capitalized species names. My prediction for this book was that Akin would become ooloi, not male, especially after he was abandoned to the Phoenix & the Oankali were talking about how their gender neutral children tend to express as ooloi under harsh circumstances...but I was wrong! Maybe that means that the third book, Imago, will be about an ooloi descendant of Lilith?
Collapse