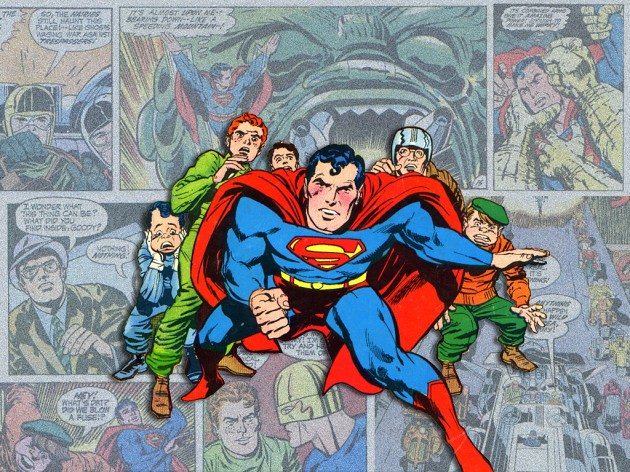 Yesterday was a lot of fun; an over-all success! It started with Terra & I grabbing an early lunch at the Madison Square food fair; a burger & a bresaola crepe from Bar Suzette. We ate that in the park while arguing over whether supersonic speed or the ability to hover is more important for someone who can fly. We also got dinner together while I killed time waiting to meet up with Jenny; we went to Beecher's Cellar & split macaroni & cheese & some Brussels sprouts. The macaroni & cheese had with curried cauliflower & sweet onion in it & was really dang good; the Brussel's sprouts were fried in duck fat & had some breadcrumbs, but I eat good sprouts all the time when Jenny cooks them, so those were just "fine." I also had a martini, which left me feeling properly civilized. We walked uptown & then split, & then I met up with Jenny to see Newsies, hence my Newsboy Legion image up top. Well, first we split a beer & Jenny filled a ziplock bag with Korean fried chicken, & then we went to Newsies. I've definitely been to the Nederlander Theatre before, but I can't remember what for, though Jenny said it was for Jeckyll & Hyde (Update:

onatopofthings says this is where we three saw Guys & Dolls). The performance was fine, but I don't really have any connection with the Newsies movie, which I gather is essential? Jenny really liked it, though, & seeing her giggling with childlike glee was pretty awesome. At one point I told her, "this is what Star Wars is like for me, but all the time." My favorite kid was Davey, the ideologue! He's the brains of the Revolution! After the show we stopped by Matt's apartment, since we were in the neighborhood, & said hi to Kat, Brian, Jocelyn & Sarah, who is in town visiting. Afterward we had the...most hobo-y train ride home, just flush with homeless people sprawling & being loud. Then to bed!
Collapse