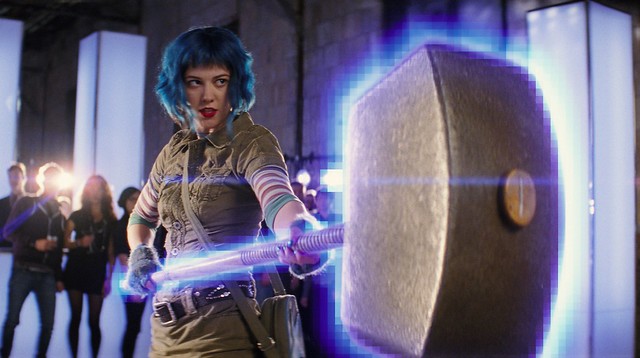 I had some dream about "War Duchess," who was like some beautiful girl who was cloned by aliens or something? Aliens who wanted humans to live in a school like fish, who had aquariums built & couldn't understand why War Duchess didn't want to live in their Sea World tank & form a hive mind. It was weird; a lot of the dream was going up & down these rickety wooden stairs, taking naps, & communicating using only a certain number of letters, like talking in crosswords. Basically War Duchess was like the sea monkey queen from those old comic book advertisements. Anyhow, last night I watched the second half of Scott Pilgrim versus the World. Yep, I sure like that movie! As much as I hated the screwed up twenty-somethings of Girls, I find the screwball twenty-somethings of Scott Pilgrim comforting. In the same way I find The Royal Tenenbaums soothing, actually. In large part because it is about getting better. Ramona Flowers isn't a manic pixie dream girl, she's a former manic pixie dream girl. I don't mind stories about wounded people as long as the story is about how they are stitching themselves back together. Similarly, Scott Pilgrim is a disaster, but that is the point; at some point you have to get your act together. I mean, I sure as hell needed to, so I get it. Also, it has people fighting with flaming swords to video game music, so. After that, while I was watching deleted scenes, Jenny came home & we watched Rob Dyrdek's Fantasy Factory. In another world we probably would have watched Punk'd, but Tyler the Creator is a homophobic misogynist so the hell with that kid. Oh & I have...an iPhone? I never really had a need for a smart phone-- I go from my laptop at home to the train where I read to a computer at work & vice versa-- so this is my first one. Post-sick makes me fussy so I spent all night yelling at it. What do people even do with smart phones? From what I can gather, you use it to play Pictionary? Anyhow, I have to finish the last chapter in this book I'm reading, since people are coming over tonight for book club.

The Poisoner's Handbook by Deborah Blum.

Take that, Eleven-Books Club, I totally finished this book with time to spare. Heck, I finished it before the new episode of The Legend of Korra came on, even. Cutting it close, though; I usually buzzsaw through the required reading a week in advance or so but I went down to the line with this one. The Poisoner's Handbook is sort of an attempt to bottle the lightning that Mary Roach rides, which is to say it is a non-academic look at a topic that relies on anecdote & context to liven the subject up. It take a bit to really get cracking, but eventually it does start going somewhere. Personally, I prefer a little bit more scholastic approach to non-fiction-- I would have appreciated a little more chemistry, maybe some structural illustrations-- but that is alright, I understand that trade non-fiction is a tricky category. I will say it avoids the "over-long magazine article" category, which is a bit of a coup, since most popular non-fiction is basically just a ten thousand word argument bulked up to eighty thousand words with circular language. The stars of this book are Norris & Gettler, the medical examiner & toxicologist who basically invented what we think of when we think of a medical examiner or a toxicologist; they were at the forefront of attempts to bring scientific knowhow to criminal forensics. The Jazz Age setting & grotesque outrages make it seem like they'd be perfect cameos for The Monstrumologist. In fact, speaking of monster hunters-- remember in that Wellington werewolf book, Overwinter, how there is a guy who gave himself agyria by drinking silver? So the werewolves couldn't bite him? Well, when the sideshow performed called The Blue Man died, Gettler dissolved his body & extracted three & a half ounces of silver from his tissues...which his staff then made into a bullet for him, just in case. So yeah. Monster hunters. Reading the bits of the book about the struggle to remove "lead"-- tetraethyl lead, or TEL-- from gasoline was spooky, mostly because it reads so much like a snapshot of the modern political landscape, where the struggle between "this terrible poison is killing people" & "well but a corporation needs to make infinite profit" is still ongoing. The FDA, the EPA, fraking, emissions, Deepwater Horizon, all of it is cut from the same cloth. & of course, reading about the Prohibition just makes me think of the modern day witchhunt surrounding marijuana, an equally ridiculous piece of political theater which primarily provides tools to incarcerate black people. Hey, plus ça change, plus c'est la même chose, I guess. This book is a relative of both Blood & Guts & Poisons-- after reading in the latter that people used arsenic to permanently dilate their pupils, I thought it might be cool to have weird anime-eyed characters in Oubliette & this has stiffened my resolve. I think the next campaign will have a cult of undeath-- arsenic being useful as a mummifying agent-- full of acolytes with arsenic whitened skin & eerily huge pupils. 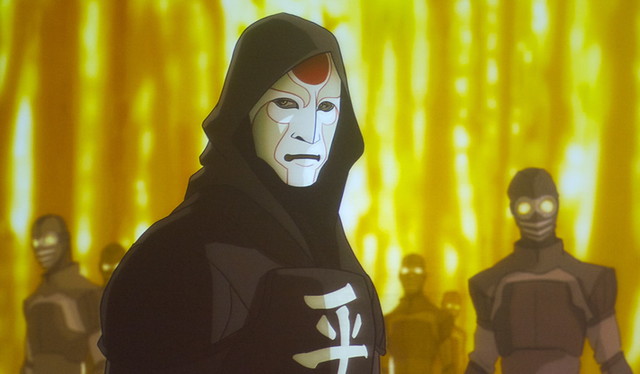 Oh my gosh all I want to do is watch The Legend of Korra all day long. Why isn't that an option? I feel like it could be an option. Friday at work I was pushing a bunch of words into a database-- brief descriptions of upcoming titles along with comparisons-- & I was able to arrange the windows on my desktop to have Avatar: the Last Airbender playing in the background while I worked. "Tales of Ba Sing Se" & "Sozin's Comet," just to whet my appetite, just to put me in the mood for today's Korra episode, "The Revelation." Oh, did I mention that the villain of the show talks like a mixture of Darkseid & Scott Free? So yeah, that is pretty compelling, along with a bunch of steampunk ninjas making chi-blocking strikes to the chakras. Super cool villains, complete with a plausible third dimension-- seriously, they're targeting violent gangsters? Fine with me if you want to make an example out of the Triads, Amon! I do subscribe to the theory that he's all wrapped up with Koh the Facestealer; I've been juggling that since the beginning. Sure, it is just because of the mask...you know, & the spirit powers. I seriously wonder if Mako is going to be gay; I think that would be a great direction, but I don't know if that is what we'll get. Oh! Zuko is still alive, we found that out-- Firelord Zuko! I hope Mei is still alive & they are an awesome old couple. I think they can put off dealing with it for a long time, thus moving it out of the realm of fanservice & into the realm of a respectful nod to the past. Best part? Mako's part-time job at the power plant shooting lightning into a collector. Also, Korra-everything. Before that I watched Young Justice, which was mostly an exercise in watching the teenagers & sidekicks of the DC universe go up against the icons of the Justice League. "Starro tech" is a really good MacGuffin. Ugh, alright, now I have to go clean up the apartment for book club but eek, The Legend of Korra, eek!
Collapse