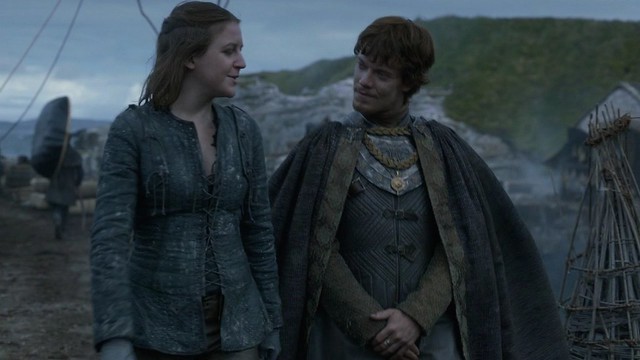 When you get to the part of A Clash of Kings with the Greyjoys, the first thing you notice is that they are...basically Cthulhu cultists. I mean, it is like Innsmouth was an island. So right there, you realize...these guys are going to be a problem. I mean, for a second it looks like it might all line up for Rob Stark-- send your dude Theon to go get a navy, make piece with Renly & merge your armies with a promise of independence when the war is done, negotiate with Jaime for your sisters-- it looks like it is all about to fall into place. The Iron Islands are the first big monkey wrench. The thing is, the Greyjoys & Iron Islanders aren't just pirates, they aren't fictionalized Vikings but something worse. They have an internally consistant ideology supporting their raping & murdering. When Baelon Greyjoy confronts Theon about his jewelry, asking if he paid the gold price-- if he bought it-- or the iron price-- if he pillaged it-- & then calling him a whore for having gotten it with money...yeah. That is when you realize that they Greyjoys are scary. They are fanatics who follow a religion of pillaging, where things like kidnapping & rape are pillars of the community, where salt-wives & iron-prices drive a whole empire. Ned Stark kicking them over was probably the most noble thing he did, never mind the Mad King. & they really chew up the scenery in Game of Thrones, as you'd expect. I think visually they are coming off great-- the super salty sailor look is a great way to temper people's Norse assumptions, & everybody loves a little incest. I will say that renaming Asha as "Yara" isn't really necessary-- oh, so the name sounds like the Wildling who is a bit character?-- but whatever. Oh, unless they just nix the marshwiggle Reeds & fold them into Osha. That is probably it. I am okay with tweaks & changes-- like making Salladhor Saan a black guy, that is a smart way to diversify your cast. I think all the changes serve an economy of storytelling-- sure, in the books Bron isn't made Captain of the Gold Cloaks, but it is a good way to shorthand that Tyrion is putting those close to him in power, & it provides a reason to give him more screen time. Stuff like that; I don't see the story making any substantial divergence. & Arya's storyline is about to hit like a ton of bricks; we've met Hot Pie before but we see him again, as well as getting a proper introduction to Jaqen H'ghar, Biter & Rorge. Given how cool Pyke looks, I can't wait to see Harrenhal. 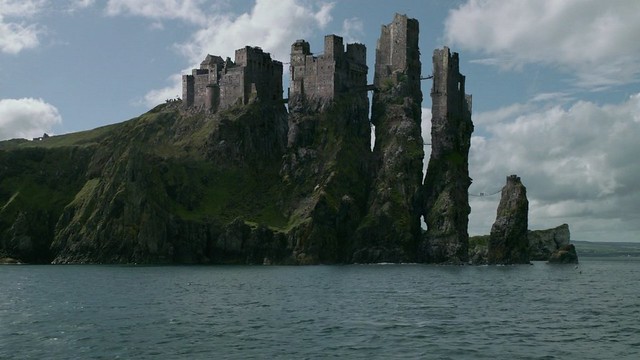 The Sword-Edged Blonde by Alex Bledsoe.

So this is a little gem, isn't it? Half fantasy novel, half film noir, I really got a kick out of this "Eddie LaCrosse" character. You know, the nearest thing I can think to compare it to is an inside-out version of Baz Luhrmann's William Shakespeare's Romeo + Juliet. Rather than modern gangsters flourishing pistols with "sword" & "dagger" embossed on the side, this has a hardboiled fantasy hero lugging a sword with a brand name like "Fireblade Warrior" or "Edgemaster Series 3." It is a better "prehistory" Shadowrun than Earthdawn was, come to think of it. Something about it appeals to me-- I'm sort of a fan of the "more things change the more they stay the same" viewpoint on history-- outside of the Great Leap Forward to behavioral modernity & the Agricultural Revolution, I think Homo sapiens has been doing more or less the same thing for a while now. So while the standard fantasy trope of wandering into ye olde inn & ordering an elvish mead might dominate the literature, it really isn't any different from going to a bar & grabbing a beer. Just set dressing, & you might as well spin it with Chandlerisms as go Tolkienesque. Plus, having had a high class brothel named Dragonfly in my roleplaying campaign, I was inclined to have a soft spot for it. I was a little bummed that there wasn't an off the cuff reference to Fechin in the art gallery, but that is just me being spoiled by Jay Lake. Most of the book is spent wondering just how much magic might be involved in the story; a fantastic setting, a skeptical hero, it balances out & leaves you wondering. I will say this: their are clues for the reader to suss out, a greater pattern at work. I noticed this series because of the anachronistic language in the cover copy-- freelance sword jockey?-- & then when Chris read it on my speculative recommendation & gave it a thumbs up, I dove in. Worth it.
Collapse