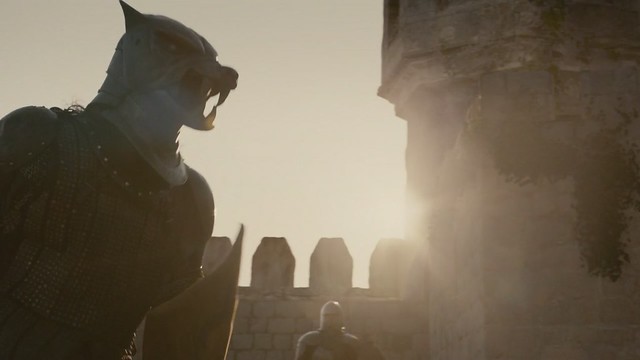 So the season premiere of Game of Thrones, huh? First off, as much as I like the books, Game of Thrones is a way better title than A Song of Ice & Fire. Secondly, if I recall correctly, A Clash of Kings is the book where Tyrion Lannister & Arya Stark move to the head of the pack, becoming the characters that the reader-- in this case, the viewer-- end up rooting for. Fine by me, since they are in fact both super awesome, & Peter Dinklage & Maisie Williams are going to knock 'em dead. No pun intended. I think Jack Gleeson deserves attention for his portrayal of Joffrey Baratheon. He's gone from a whining brat that we all hate to a terrifying psychopath that everyone fears. Like Tom Felton's Draco Malfoy, we're seeing a child actor tasked with playing a villain growing into the role, & I always find that interesting & endearing. Is that just me? Maybe that is just me. The CGI on Daenerys' dragon Drogon & Robb's direwolf Grey Wind came out nicely; at least, all I needed was it to be good enough to let my suspension of disbelief kick in, & that it did. Robb intimidating Jamie in a cell with a giant wolf at his side was very effective. We watched it with Kira & Nino on their new big state of the art television & it was actually too crisp; it looks like theater, not television. You could tell it was actors on a set, you could tell when the props ended & the green screen started. The display technology is outpacing the animation technology. The vindication of early George Lucas & the condemnation of late George Lucas. Peter Jackson Was Right. Detail in costuming, filming on location, old school pyrotechnics & analog effects, that sort of thing is going to hold up a lot better under scrutiny than the uncanny valley of plastic computer generated graphics. Not that I am not a fan of CGI-- far from it!-- I just think judicious use will reap better results than applying it like a panacea.
Collapse