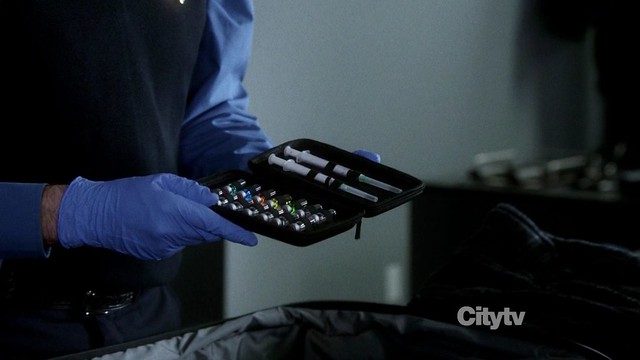 I already had a soft-spot for the new Fringe episode "Nothing as It Seems" from the start, what with the mutant porcupine monster angle. I played a mutant porcupine assassin in TMNT & Other Strangeness for years as a child. Like, from nine or ten to twelve or thirteen, which is just ages; basically my whole tweens. In a fit of sarcasm I named him Spike Q. Seta-- seta being Latin "bristle" & the "Q." standing for "quill." He had an A-Team van with a minigun on top & ended up retiring to a parallel dimension where the Mongols had never stopped & just become the dominant paradigm of cultural development. My point being, you tap into deep seated positive associations when you talk about mutant porcupines with me. The episode was a callback to the first season episode, "The Transformation," & the menagerie at the end on the container ship makes it seem like an alternative history of earlier cases might be the rubric of the next few episodes. So yeah; things are getting all Transdimensional TMNT up in here. I didn't expect to be waxing poetic about old Palladium products when I started writing this in my diary, but what the hell-- Transdimensional TMNT is the most cogent system of time travel that I've ever seen. & the aforementioned alternate post-Golden Khan parallel Earth? That is random result 56-65 on a d100, a world "...ruled from the isolated hardship of the steppes," as the parallel realities are tied into the possible left-turns of history. So yeah, I was liking Fringe a whole bunch...& then Peter & Olivia went to a bookshop & asked for Gene Wolfe's Lake of the Long Sun. So, I sort of lost my marbles about that, on account of how Gene Wolfe is the greatest living writer & the Solar Cycle is his most important work. I know people might disagree & say the Latro books or The Wizard Knight, but it is all about the Solar Cycle for me.

My day was otherwise fairly uneventful. Jenny hurt her back, so I've been fetching things for her & generally trying to be a nice husband. I made a breakfast of English muffins with bacon, spinach & eggs, & then ordered lunch from Eaton Too. The pork bao were really good & really cheap-- three for three dollars-- & the Dumbledores were good too. Dumplings, I mean. Some of them were better than others; I got the assortment & I was too busy scarfing them down to try to figure out which was which. The ramen was bland & forgettable, though, so I'll skip that next time, or order from Naruto. I went to the gym & had a nice solid pitch of a workout. Bothered by some guy on the phone loudly talking about how they need to be careful or someone will steal their idea before their patent comes in. Kind of tempted to point at the "no cell phones" sign or to steal his idea, since talking on a cell phone in public hardly counts as discreet. I'm full of spite & petty malice in my heart, I know. Oh & Jenny & I watched an episode of Castle cashing in on the Occupy Wall Street movement. It was...well, I don't care about Castle much since it has increasingly turned towards drama. & become a sloppy police procedural. Where is the wry wit? Where is the satire of the genre? Gone, I fear, alas. After all was said & done I headed to the next neighborhood over-- well, the next next neighborhood, really-- to go to Sam's birthday party. Sam (& Tracey) being some of my players in Oubliette. Sam got a brick of Paizo minis & I was super jealous. Mini greed! Tracey made lasagna & Bill & Hillery made strawberry shortcake-- actually, there was more food than that, but that was what I ate & it was good. Mike was very gentlemanly with his sake, which I was appreciative of. I did a half Irish exit-- I told people I was going to start getting ready to leave, & then just sort of ducked out. I had to put my shoes on at one end of the apartment so it just seemed easiest.
Collapse