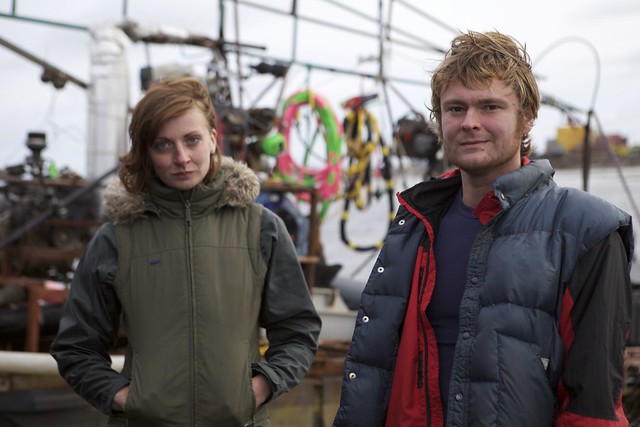 At the gym last night I caught a couple episodes of Bering Sea Gold, & despaired for humanity. It just held up the most despicable human beings as a sort of hardscrabble hero; ugh. The premise of the show is a sort of spin off from Gold Rush, an inheritor of the Deadliest Catch & Ice Road Truckers legacy-- in this case, these are river panners writ large, dredging the bottom of the Bering Sea for gold, sometimes diving down there to find it. Okay, that is pretty intense; the problem is that...well, the whole "Alaska as the Wild West" is true. & the Wild West was full of broken people & crooks. Not admirable. Watching something like The Jersey Shore is a different animal; the show is half adoring of them & half mocking them, & it is cultivated, you know? No one is surprised that twenty year olds are morons, especially if you hold casting calls for the goofiest. The Bering Sea Gold people-- well of course there is an element of "reality" television to it, but it is more documentary style, & by design has less room for meddling. Now, I realize that even though the show attempts to show a sort of noble grace to these working class stiffs, the soap opera drama is part of it. The people are complicated, because people aren't two dimensional, even the worst of them. The problem is...I don't find anything appealing about the version of machismo that is on display most of the time. Like-- I think we're supposed to identify with Scott, the young captain who is dealing with a domineering boat owner & crew problems? Except they are undercut by the fact that Scott is in the hole $17,000 just on the money he borrowed to come out to work in Alaska...which isn't including the $100,000 in back child support he owes. Stay classy! Or the fact that he talks about how he had to fire one of the crew because he didn't want to...get angry & throw him into the icy water to die. Not because that would be bad, but because he can't have another assault conviction on his record. Because! The kicker! Because he thinks about going to jail to avoid having to pay child support, but he's not there yet. That is the guy I think you are supposed to be rooting for, at least that is how the narrative seemed framed to me.

Or maybe it is Zeke we're supposed to root for...but Zeke is the worst of the lot. I mean, one of the most beautiful examples of misogyny on television, really. One of Zeke's employees is Emily, the only woman on the show & his childhood friend. The problem is that he sees Emily flirting with a guy at a bar! & he is in love with Emily. So...he fires her & evicts her. He can't have that distraction! It is addressed like "Zeke makes a tough decision." Yeah! He makes a tough, illegal, sexist decision. By the way, he evicts her...in the middle of Alaska. She can't hop on a plane or go home. She's in the middle of Alaska as the season is turning to the worse. She was living in an abandoned shack & panning for gold in the river the old fashioned way to try to get by when I got off the elliptical. Nobody at any point addressed the fact that firing someone & evicting them because you have a crush on them is pretty awful. There was another plotline-- I didn't pay enough attention to it-- but as I understand it the owners of the boat has a tradition in which they clean up the gear after a season. & this year they invite some of the crew to help, & the crew discover that they find a not insignificant amount of gold that has "fallen through the cracks" during the harvesting process when they do these clean-ups. You know, stuff stuck in the gears & joints & whatnot. & one of the crewmembers asks them what happens with this gold-- do the owners line their pockets with it, keeping it out of the regular share split?-- & they fire him for asking too many questions. For accusing them of being thieves. Which, I don't know, makes them look guilty as hell. The comments on the internet about all of these people are split. Split three ways, actually, which sort of gives me a little hope for you talking apes. The first two are the sadly predictable partisans. People who can either see that these guys are dipwads, or who admire these scumbags, presumably because they are scumbags too. The third group is the funniest group, though. Unsurprisingly, a lot of these guys have shady contracting jobs during the off season. & the thing about sketchy contractors is that they do a half-assed job. The third group are people who have personally been screwed by these guys.
Collapse