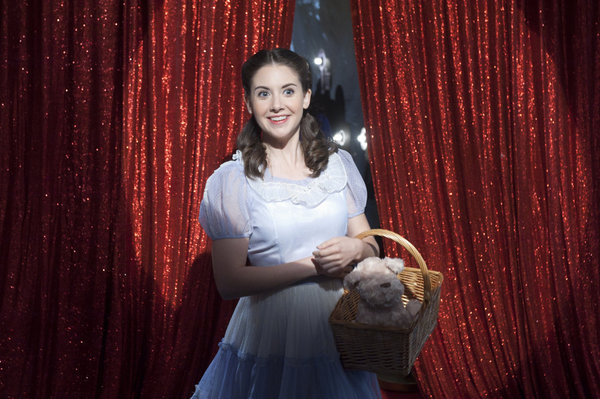 Like I said before, I think I'm fighting something off, like a cold or something. Even though I don't have sniffles. Maybe I'm just way tired, even. Either way, I was a total washout when I got home from work today. I'd spent all day at my desk entering contracts, only getting up for fifteen minutes to grab a salad for lunch & twice to go to mass market meetings. I thought I was going to be ready & raring to go to the gym, but I just didn't have it in me. I just, blah. You know? So I finished reading Roverandom & played some GoldenEye. It was a super annoying session, actually; games when I was doing well, I got rage quit on, & then the rest of the time I was paired with a mediocre team against a bunch of high level players & it was just Waterloo. Maybe I was playing poorly too, maybe I am sick & it slowed my reactions. Whatever, I can't really tell what the difference between sick, sad, & tired it, no matter how many times you describe it to me. Jenny came home & sent me out to go get her pizza-- you know Albanese Pizza is under new management? I was just there last week. That place looks like your average Metropolis pizza joint, but it was actually pretty fantastic, what with all kinds of weirdo slices. These new guys have unique slices, but different unique slices...like, they are all about pasta as a topping. Got an Alfredo & tortellini slice that was pretty good, a ravioli & vodka sauce slice & some other slice, too.

Then it was time for a sort of Frankenstein's Monster of comedy shows! Community being the star of the evening. Matt is desperately looking for a like, Wolfeian pattern of interweaving timelines. He wants to see the parallel realities of "Remedial Chaos Theory" play out macroscopically, but I don't think he will get that. I mean, witness the triumphant return of Dark Abed, with his brilliant catch phrase "Hot. Hot, hot, hot." We'll see thematic linkages, we'll see the element carried forward, but I don't think this is headed toward a Crisis on Infinite Greendale moment...though I would gladly eat crow on that. As a wise man once said: "This is really crazy. And inaccessible, and maybe too dark." To which the evil buddha replied: "Maybe to them, but not to us." After that I put on The New Girl, because...well because I wanted to! I am now a Zooey Deschanel champion, full force. I'm a pretentious geek who wears all black & wants to talk about his roleplaying campaign all the time; if you want to be a pretentious twee pixie & you acknowledge that, then climb onboard the "I can do what I want!" train! Anyhow, also this episode was pretty hilarious, with the cherry being Schmidt heckling Winston & his lady friend as they made out. After that it was Cougar Town which worryingly had...plot. Grayson's kid? I wouldn't be troubled if the mother hadn't seemed like a throw away gag. I like television without plot better than shows with plot, as a rule, & frankly this reminds me of Luke's surprise kid on Gilmore Girls. A troubling association, since...well, I don't blame that concept for ruining Gilmore Girls but it was how the storyline played out that ultimately doomed a season, & thus the show.

The Polysyllabic Spree by Nick Hornby.

Lead the Sacred King
into the grove. Cut his throat!
We god-haunted Spree.

Hey! I like reading books & then writing about them in a sort of scattered, musing way. & hey, I like Nick Hornby! It turns out, those two things are actually all I have in common with Nick Hornby (besides the oodles of privilege that come along with being white English speaking males in the middle class). That didn't hamper my enjoyment of this book; I mean, part of the whole point of Nick Hornby is who cares if you like soccer or crappy bands from the Eighties, he can make writing about them fun. So he does, & I came along with him. I didn't have a lot to say-- he likes mostly the sorts of books you are supposed to like, classics & whatnot, & a lot of books that go on to be made into critically acclaimed movies later on. He's not the worst about it, though; he likes reading Dickens & whatever, so go ahead. So does good old

ravenface, & I like wizards & spaceships & there we are. We got close to each other when he read those 33 1/3 about the Smiths & somebody else; I read the one John Darnielle wrote about Black Sabbath. We eventually did have some overlap in Y: The Last Man, but that was it, though he did speak glowingly about Red Dragon when he read Mystic River. Hornby's not a snob-- he paraphrases a bit from Tom Shone 's Blockbuster where he says "you can get finger-steepling & sharks in the same book," referring to the character studies in Jaws...& of course, you know, Jaws. I feel like where I most stridently disagreed with him (besides him liking Lethem's Fortress of Solitude, blech) was at his wonder at why people want to make Dickens into televised series all the time. It is right there, man: series! They are serial; adapting them serially is a natural leap of logic. & as for there not being anyone who could play Uriah Heep & Quilp? Maybe it is just because I watched Community last night, but Danny Pudi & Donald Glover would be perfect for those roles.
Collapse