Nice little party with Kira & Nino-- sans Olivia!-- at Brian & Nicola's apartment last night. Weird day beforehand, though; I was just super weird about food? I ate cereal rather than making bacon & eggs, which was the plan, figuring I'd make more of a brunch than a breakfast & then...never went back. Skipped it, & went to the gym, where after fifteen minutes on the elliptical I felt faint. I swooned! Or I fluttered, anyhow, so I just left & went around the corner & ate a plate of hot wings, & then went back & did some weight machines. I don't think that was the most reasonable course of action, but it was the one I went with. I actually debated whether I should keep it secret from Jenny, once I realized I was being weird, especially since I had left her in the lurch regarding lunch. I of course told her when I got home, & she quite reasonably made fun of me for it. Then to the party, all aboard the G train (thinking about Mindy Kaling, who came up at another point too). There was a bit of the Brooklyn follies as Nino & I struggled to find something for desert without nuts or eggs. Wait, is The Brooklyn Follies about, like, cancer? I just mean we were being all Keystone Kops. Nicola has done a few audiobooks for us-- she's a voice actor-- so that was a nice touchstone. The duck rillette was the big dinner winner, for me, followed by the risotto. We took a scotch tour of the Inner Hebrides; Laphroaig Triple Wood from Islay (eye-luh) & a wee little bottle of Talisker from Skye. Then from the Highlands there was the Drambuie 15. Actually, Brian had quite the cabinet, but those were the ones I had the temper to sample before it was time to traipse along home. & now, Monday! I've got some stuff to get cracking on as soon as I get into the office.

I feel like I'm at a point with fashion similar to where I was with comics a few years ago. I'm just starting to get into it, but I'm just scratching the surface. I feel like I'm reading the Millers, the Moores, just starting with Bendis & Morrison, & everything is fresh & new, but I probably have huge, glaring, embarassing holes in my body of knowledge. I mean, Alexander McQueen is still by far my favorite designer, which I suppose is sort of an obvious pick-- it isn't one of the "deep cuts," so to speak. So yeah, I just want to say: salt to taste, because everything I say probably needs to be taken with more than a grain of salt. So when I say that Lanvin strikes me as a little pedestrian, know that it is in the context of first being aware of them when Emma Stone wore it at the Golden Globes, & act accordingly. Or when I tell Tom Ford to shut up with his casual transgender slurs, I say it having liked what Gweneth Paltrow wore to the Oscars. I'm in a place where I've just finally gotten over thinking of Burberry's prêt-à-porter check as the dominant aesthetic, & really started appreciating the more couture capes & hoods converted out of a trench coat. That...that actually really appeals to me, Christopher Baily. I have a short view, is what I'm saying, but I'd trying to rectify that. This Taschen book, 100 Contemporary Fashion Designers, was a gift from my in-laws, & it should help fill in some of the gaps in my body of knowledge. I remembered I had it up on the high shelf where oversized books go to live in my apartment after I saw the Fashion A - Z show at FIT, & decided it was past time to dig into it. 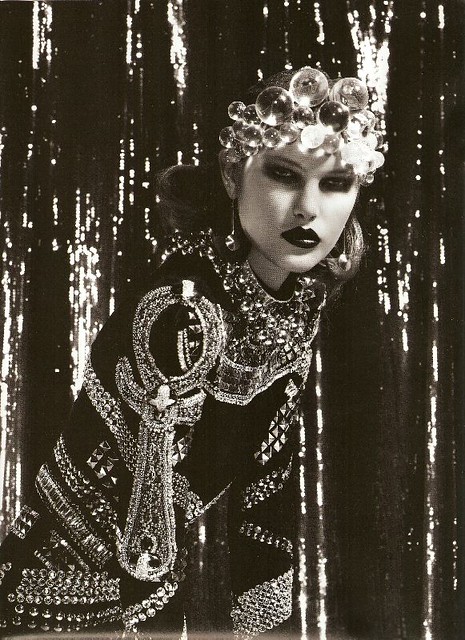 I really like the gothy sensibility of people like Roberto Cavalli & Ann Demeulemeester. Jean Paul Gautlier's sense of theatricality is foundational to the over the top fashion spectacle that I crave. Nicolas Ghesquière's Balenciaga is like a more wearable version of it; I'd strap into some of those more military looking outfits, if I could. I'd never heard of Anne Valérie Hash, but I like what I saw of her, though Marcus Tomlinson deserves some credit for a wonderful photo. Viktor & Rolf strike me as-- well, I want to say, "what I'd be like if I was a fashion designer," but that is pretty presumptuous. Anyhow I laughed at their "[we] never take candy from strangers, however, if it's enough candy from an important stranger, etc" response to being asked if they have been influenced by people's reaction to their designs. Comme des Garçons is effing phenomenal, from Rei Kawakubo to the prodigal Tao Kurihara. Each of the designers featured is asked the same series of questions; notably, one of them is "[can] fashion still have a political ambition?" Which seems ridiculous to me; in a world where dressing a man in a skirt is controversial, it seems ridiculous to pretend like fashion doesn't have a political punch. Heck, a woman in a tuxedo is still controversial. & I did just read a book about Ricardian lavishness, conspicuous consumption as a way of establishing economic superiority. Just saying.
Collapse